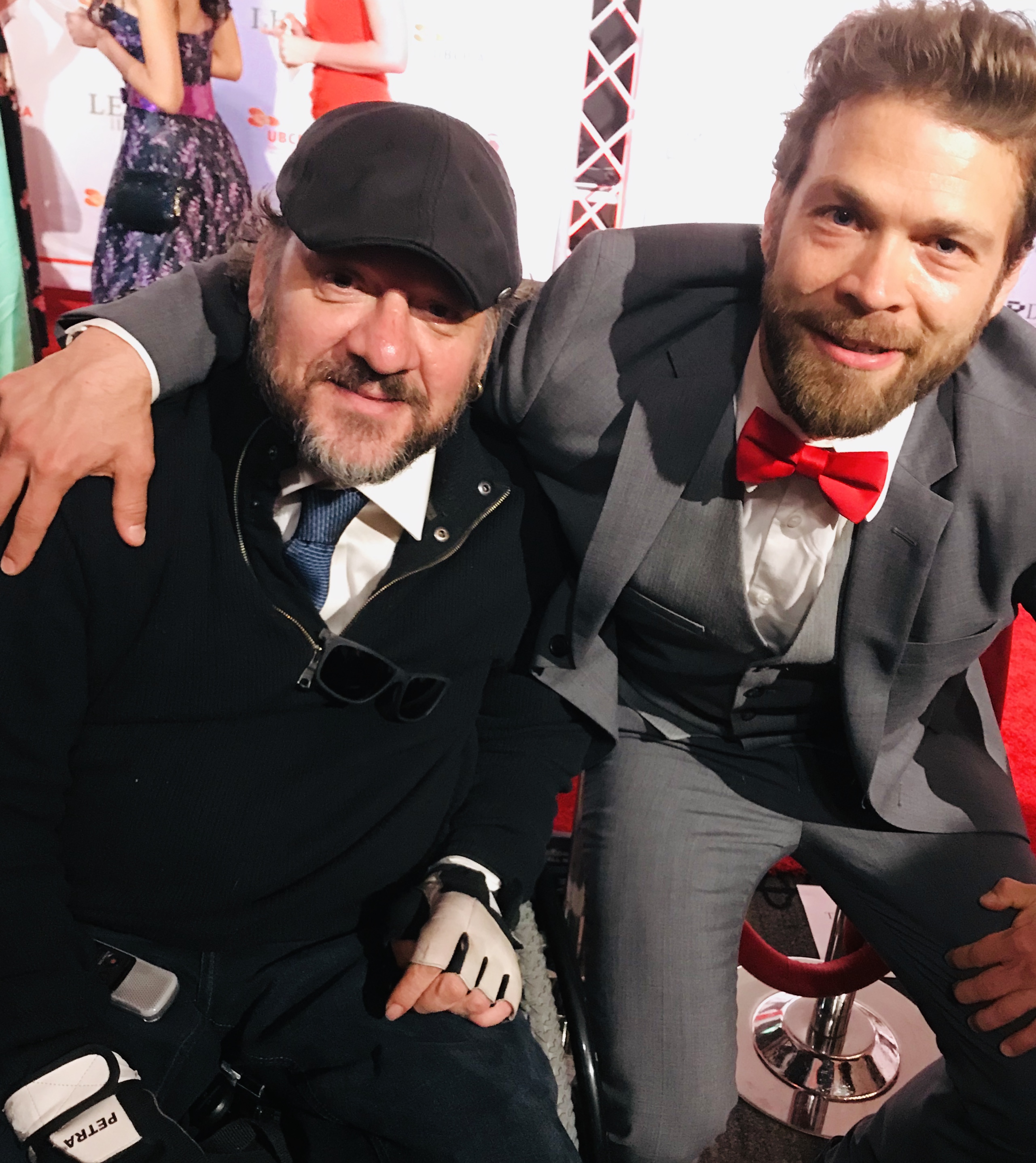 The Leo Awards did not need catnip to fill the red carpet because it has incredible swagger. Ferocious and cunning, instinctive and stunning are just a few characteristics of that meandering walk and talk. Having the opportunity to speak with an actor or director while the iron is hot is both exhilarating and synergetic. The information exchange can only be described as harmonic and euphoric.

With my list of prospective and hopeful interviews on my phone, I waited for the moment to pounce once my targets were spotted. With my Forrest Gump wave and recorder in hand we began the dance with a pronounced prance. After all, the cameras do not sleep or rest, they want you at your best. Chewing the fat with a chinwag dessert seemed appropriate enough until push came to shove. The meet and greet was over just as the fun had begun and I savoured the flavor like a cat with bad behavior. The red carpet had become empty where there was once plenty. My recorder was full with their generous words from the soul, it was my cue to go.

With that being said, here is a snapshot of that magical moment.

My first special guest to saunter over was the magnificent and multi-talented Juan Riedinger. Better known for his role as Carlos Lehder in the popular Netflix series Narcos, Teo in Good Behavior or Rufus Decker from sadly missed, The Romeo Section.

“Hello Juan, thank you for the opportunity to talk to you. Can you please tell us the name of the film you are here to represent?”

“I’m here representing and supporting the film, A Snake Marked, that I directed. My good friend Adam Lolacher, who’s been nominated tonight, wrote it.”

“I’m so used to seeing you on The Romeo Section and Narcos. How does directing compare to acting?”

“I’ve directed about 14 short films that I’ve not acted in. I like to keep the two separate but I think my experience as an actor has helped me as a director. It’s allowed me to develop a short hand with my actors and really speak their language. Being able to work with someone like Adam has been such a treat because he gives it 150%. We actually slept in the prison (shooting location) together. It was a bit of a spooky experience but I felt like it brought something extra to the screen.”

“Is that the first time you’ve slept on location?”

“No it’s not actually. My first film was at a casino and I slept on the Craps table one night. Part of the reason is for insurance purposes and to protect the gear but also to better absorb myself into that world and allow the environment to sink into your pours is invaluable when you’re directing.”

“Do you hope to continue with both the directing and acting?”

“You also co-wrote this film. Have you written past films that you’ve directed?”

“I actually enjoy directing other peoples screenplays because I find when it’s something I’ve written I tend to hang onto every word, every sentence and it’s really hard to separate myself from that. With that being said my first movie, Shark Out of Water was written and directed by me but for me my focus is directing and editing. Editing is one of my favourite areas of production. I find that when I’m editing, that’s when you’re really doing the crafting. It’s a solitary experience when it’s just you and the felt. You’re also retelling the story in a way it hasn’t been told before and you’re getting to shape it.”

Juan Riedinger is the consummate gentlemen and a very personable guy. As he continued down the red carpet road my next guest happened to be hopping by with his family along side. He is a talented writer, director, producer with a smile that can bring out the sun. He is Derek Hamilton and I couldn’t wait to talk to him. “Hello Derek and thank you for talking to us. What’s the name of the film that you’re here representing?”

“Can you tell me how you became involved in the film?”

“I did a film with Jesse James Miller who directed Becoming Redwood and together we came up with the idea for the movie Rabbit and here we are 5 years later.”

“What can you tell me about the character that you play in the film?”

“I play Michael who’s also the main character Rabbit. I return home to discover my brother’s gone missing and I haven’t been back to my town in 20 years. Upon returning I uncover a lot of dark family secrets while searching for my brother.”

“You co-wrote this film. How was it inspired?”

“Great to hear that you’re representing the Maritimes. Cheesecake or apple pie?”

“Why do you love this business so much?”

“I love the juxtaposition of my whole life. I’m also a mason and do brick, rock and stone work. I work with that as an art and this gives me another form of showing myself and what I do. Film gives you that.”

Derek returned to tell me that his two boys and his amazing wife were also in the film. If we had spoken much longer I could definitely foresee a bromance transpiring, he’s that nice of a guy! Rabbit was nominated for multiple awards and Gabrielle Miller took Best Supporting Performance by Female in a Motion Picture and Schaun Tozer won Best Musical Score for Motion Picture.

As countless pairs of well-dressed legs walked past, I began to feel alone. I had considered bringing a snare line but as I left the comfort of my hunting cabin to drive to Vancouver, I was once again distracted by singing birds and failed to grab it. At that very moment of regret, Adam B. Stein and Zach Lipovsky broke from the crowd and began to walk over.

“Hello Adam and Zach, which film are you here to represent tonight?”

“What does it mean to you both to be here representing your film?”

“It’s so exciting, this is my first time at the Leo’s. We couldn’t have made this film without the support of so many people in the Vancouver film community. It was a very low budget film with a family atmosphere. Lots of people did us favour’s and pitched in and we’re so grateful to be part of this community.”

“What’s your biggest takeaway from making this film?”

“We made this movie without asking anyone’s permission. We didn’t wait for grants or studio approval; we just went ahead and did it. Having done that, it’s opened so many doors that wouldn’t have been opened. It’s been an incredible journey.”

“Do you think you’ll make your next film the same way?”

“We want to do both. This film has led us to much bigger projects, which is great but we also love the experience of doing smaller films that allow us full control over the entire project. There’s no substitute for having the creative freedom to really make the kind of movie you want to make. The movie is coming out on Aug. 23rd in theatres and we hope that people will check it out in support of Vancouver film.”

“Where can we expect to see the film?”

“Yes, co-wrote, co- directed, co-produced and we also did the craft services.”

“How was this story inspired?”

“It was inspired by my son, originally. I was a new dad and Zach being my best friend was staying with us. We were just so fascinated by watching how he saw the world and tried to make sense of it. We’re both science-fiction fans so we started talking about how interesting it would be to tell a science-fiction story through a child’s eyes. That was the initial inspiration for it.”

I hate goodbyes but when you like someone you have to set them free. I wished them well and I have a feeling it won’t be the last time I talk to them about their next brilliant project. That feeling of anticipation may have been spurred on by the Champaign but I’m certain I’ll see more amazing films in their future.

My next guest was the incomparable Jackie Lind who’s work as a Casting Director has landed her projects such as Fargo, Shooter, Somewhere Between, The Order, and Van Helsing. She looked like a million dollars, so I just had to ask…

“Hello Jackie and thank you for coming over to talk to us. You look amazing! How long did it take to get ready for todays Leo’s?”

“It took me a couple hours.”

“What film are you here to represent?”

“The Bletchley Circle and Valley of the Boom.”

“As a casting director, how do you make actors comfortable when they come in for an audition?”

“I pride myself on providing a safe environment and keeping it comfortable and very peaceful. I want the actor to believe that they have a place where they can play and feel safe. We’re their biggest cheerleaders so everything is professional and we’re very supportive.”

“How do you know when you have the right actor for the part?”

“You just do. I can tell in 3 lines. There’s lots of people that might be great for the part but every once and awhile you have someone come in that has star power and it’s stunning.”

“What’s the name of your agency?”

“Neither, I’m terrified of heights.”

And just like that Jackie Lind sped off with the force of a Ferrari. Casting directors don’t get nearly enough credit for the talent they bring to a project and their weight is measured in gold. They have my respect and admiration. They say you save the best for last and they were correct. Walking toward me was the very beautiful and extremely classy, dressed to perfection, Briana Buckmaster. Briana is best known for her role as Sheriff Donna Hanscum in Supernatural, Wayward Sisters, Continuum and countless earlier films. I’ve also recently discovered that she can sing very well but made the decision to focus entirely on her acting career. I think her career is singing sweet music and I’m cranking up the volume!

“Hello Briana and thank you so much for your time in talking to us. You look amazing tonight. I enjoy watching you on Supernatural. Can you tell me what brings you here tonight?”

“Can you tell me about your character on Supernatural?”

“I’ve been Sheriff Donna Hanscum for the past 6 years and love my character!”

“I know you are a kickass, take no prisoners sheriff.  How did you prepare for the role in the earlier days?”

“I researched the role of sheriff in the US. We don’t call them Sheriff in Canada.”

“Because I get to play such a badass sheriff and a strong female character.”

Although Briana Buckmaster and I never talked very long because she is in high demand, I like to think we had a moment. The type of moment when you’re lying outside at night on a blanket looking at the stars… together. Holding hands and waiting for that bright light to zip across the dark twinkling canvas of that night sky. When it happens, I take a deep breath and close my eyes. My wish has been made and I look over to Briana. She’s sleeping and didn’t see it, but that’s not really the point here (clearing throat). The Leos were amazing and the connections were magical.  5 Roars loud!