Another year. Another Oscars. Another controversy.

Ratings for the Academy Awards have been flailing in recent years, and the Academy of Motion Picture Arts and Sciences have tried to address this by actively dispelling its reputation of #OscarsSoWhite and including more female nominees in certain categories (both of which is apparent in yet another diverse list of winners this year), as well as shortening the historically lengthy telecast by awarding select categories before the actual show, which obviously did not sit well with many. This is the first year that they have used a truncated televised approach, and while I’m sure the Academy would love nothing more than to focus solely on how this change affected their ratings, it was overshadowed by one of the most shocking moments in the award show’s history.

Sure, there were snubs at this year’s awards, but no one was slapped in the face quite like Chris Rock. It was the slap felt – not heard –the world over. This moment was so shocking, even by Oscars or, dare I say, Golden Globes standards, that when I saw it reported (I didn’t watch the telecast live) I chalked it down to some rehearsed bit. That is, until I saw another report that Chris Rock would not press charges, at which point I watched the video and had the same major “Holy shit!” moment I’m sure everyone else did.

For context to anyone living under a rock whose name isn’t Chris, the comedian made an admittedly tasteless joke about Jada Pinkett Smith, who has alopecia, being in “G.I. Jane 2,” referencing the 1997 film G.I. Jane where Demi Moore famously shaved her head for the titular role. Her husband Will Smith, who later won Best Actor for his performance in King Richard, walked onto the stage and proceeded to forcefully slap Chris Rock across the face, creating a meme for the ages before following it up with some choice words hardly ideal for a family audience, or the Academy. Smith tearfully addressed the incident in his acceptance speech and apologised to seemingly everyone except Rock, though he did release an official apology to the comedian today.

As of writing the Academy condemned Smith’s actions and have launched a formal review into the incident. Smith half-jokingly ending his speech with “Hope the Academy invites me back,” feels like much less of a throwaway line now.

While the media’s coverage of the Oscars would almost make it seem like the show started and ended with “the slap,” people other than Will Smith did win awards last night, and there were certainly a few surprises and firsts. 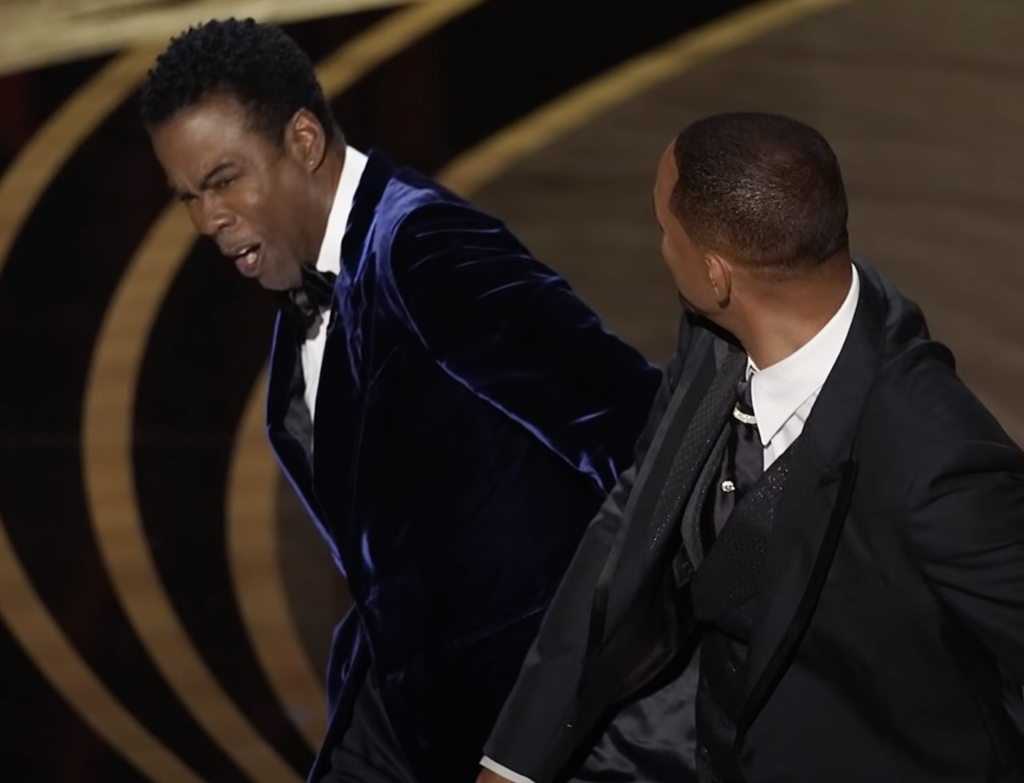 Starting with the biggest winner of the night, Quebec filmmaker Denis Villeneuve’s Dune took home six awards for Best Original Score, Best Film Editing, Best Cinematography, Best Visual Effects, Best Production Design and Best Achievement in Sound. As you may have noticed, Dune (and indeed Villeneuve) failed to take home any statues for what many consider the “major categories,” but its dominance of the technical categories speaks to how much of a landmark audio-visual achievement it is.

While Villeneuve’s first Oscar continues to elude him, Canada did not come up empty-handed at this year’s awards. Canadians who worked on Dune with Villeneuve, Patrice Vermette and Tristan Myles, won Best Production Design and Best Visual Effects respectively, while Halifax filmmaker Ben Proudfoot won Best Documentary Short Subject for directing The Queen of Basketball.

Most notable among this year’s landmarks is Jane Campion’s win for Best Director for The Power of the Dog, which marks the first time that women have won the award in back-to-back ceremonies, as Chloé Zhao won last year for her work on Nomadland. There is the question of why it took so long for this to actually happen in the first place, but it is nonetheless a positive step forward in a category that has, historically, been overwhelmingly dominated by male nominees and winners. This is Campion’s second Oscar, winning her first in 1993 for Best Original Screenplay for The Piano, and she is also the first woman to be nominated twice for Best Director.

While on the topic of firsts, Ariana DeBose became the first openly queer woman of colour to win Best Supporting Actress for her widely lauded performance Steven’s Speilberg’s West Side Story remake, while Troy Kotsur, for his performance in the retrospective dark horse CODA, beat out favourite Kodi Smit-McPhee in the Best Supporting Actor category to become the first deaf man (and second deaf performer) to win an Oscar. CODA would eventually go on to snatch Best Picture from hot favourite The Power of the Dog, which ultimately underperformed at the ceremony, even with Campion’s Best Director win.

Other notable wins include Jessica Chastain finally earning her first Oscar for The Eyes of Tammy Faye; musical savant and The Roots alum Questlove winning Best Documentary Feature for directing Summer of Soul; Kenneth Branagh earned some well-deserved recognition by taking home the Best Original Screenplay trophy for Belfast; and acclaimed actor Riz Ahmed, who earned his first ever Oscar nomination in the Best Actor category for his performance in Sound of Metal last year, shared the award for Best Live Action Short Film with Aneil Karia for their work on The Long Goodbye, which was a short made to accompany Ahmed’s acclaimed hip-hop album of the same name.