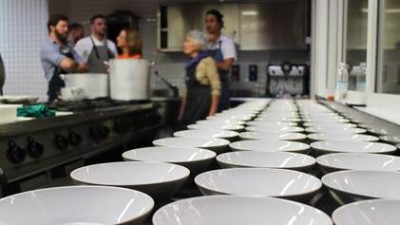 (via NFB) Theater of Life has recently finished shooting and is moving into post-production. This amazing new feature documentary talks about hunger and the waste of food, and how to fight both of these issues. It’s directed by Peter Svatik and stars Chef Massimo Bottura, along with 40 worldwide chefs who cover one of the biggest issues in the food industry: food waste, which is a major problem in Canada and throughout the world.

Every year, companies and even individuals discard over $30 billion of food. Not only is this is a large cost to the economy, food waste also contributes to a greenhouse gas called methane. Chef Bottura intends to start new initiatives, and specifically add something new to the theme of feeding the planet, as he stands for the zero-waste policy. Along with a large band of chefs, both Canadian and International, Botturra plans to implement the new plan of turning dumpster destined food products into meals of high nutrition for the homeless and struggling. Specifically in Milan, a city in his home country of Italy. Having secured an old abandoned theatre, Bottura intends to use it as a space to feed the needy.

The style of the documentary won’t be conventional, but rather covering the stories of some of the people who have helped make Bottura’s idea a reality. These people include Don Giuliano, a local parish priest who helped obtain the theatre, along with some homeless refugees who all have a story they would like to share.

To also raise awareness in the food waste issue, the Phi centre in Montreal will be sponsoring this project by hosting a conference and workshops to show what chefs can do to take care of food waste and make it work for the homeless.