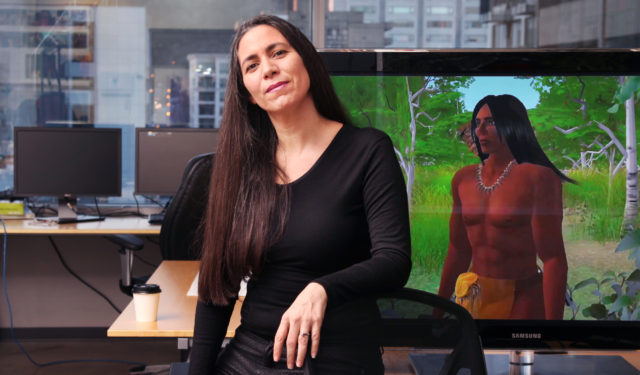 (Via Wireservice.ca) As we mentioned last Thursday, Kanien’keha:ka artist Skawennati is set to lead Aboriginal Territories in Cyberspace’s (AbTeC) Skins Machinima Workshop in Vancouver this month, with six First Nations youth participating. They will learn machinima, a technique for filmmaking in virtual environments, and produce their own animated film. As we noted just after National Aboriginal Day, there are several initiatives ongoing to encourage First Nations people to express themselves in media.

This workshop comes about as part of Skawennati’s residency at the Burrard Marina Field House in Vancouver, an off-site artist residency space. The Contemporary Art Gallery has been bringing artists there since 2013.

Skawennati is a co-director with Jason Edward Lewis of Aboriginal Territories in Cyberspace (AbTeC), which works to “share conceptual and practical tools to create self-determined Indigenous spaces online.” One of her projects is TimeTraveller™, featuring nine machinimas that recreate significant moments in Aboriginal history. Another is entitled Imagining Indians in the 25th Century.

Her goal for workshop participants is to complete the project, no matter what story they choose or how simple it may be: “It’s more important for them to learn how every stage is done (and have a finished machinima) than it is to come up with an incredible story that we can’t finish.”