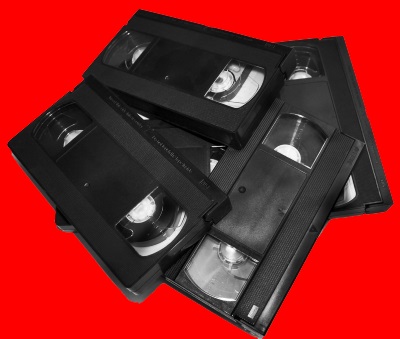 (With voting on Storyhive’s web series competition closed today, here’s our last review of an entry — which turns out to be our favourite. To see the rest of the entries, click here.)

Straight to Video is an adventure series featuring a video store owner named Kevin Martin who has to escape a world of movie genres.

The pitch starts out with Kevin explaining his journey and what he has to do.  The video then rewinds (really) to a shot of Kevin standing at a counter looking lonely. He further narrates he lost his girlfriend and everything else “when people stopped renting.” We see he’s watching a war movie on an old fashioned TV that sits in front of a couch at the front of his store. Onscreen, a character is telling his friend to give up because he has no chance but to die.

Kevin looks at a poster with the words of Kurt Cobain — “It’s better to burn out than to fade away” — which seems to be telling him what his only option is: Burn the place down. So Kevin douses everything in the store with gasoline, in a slow sad montage. But right when he’s about to drop a lighted match, a video tape drops through his mail slot and slides to his feet.

The tape is called “The B-Movie Odyssey” and carries a warning that it’s “magic.” Unsure of who sent it or why he even got it, Kevin pops the tape into a VCR and starts to watch it on the TV. The tape shows a vortex opening up as a demonic voice calls to him. When Kevin tries to turn off the TV, nothing happens, and soon Kevin as well as most of his movies get sucked into the portal.

Kevin then finds himself in a log cabin about to be murdered by a serial killer similar to Jason Voorhees. Before the killer can strike though, he is taken out by a woman with a crossbow who shoots him down with poison darts. The woman staggers into the cabin dragging a bear trap she’s caught in. Kevin then realizes his journey through B-movies is just about to begin.

This pitch was a lot more interesting than anything else I’ve seen. I honestly think this is the best one worth voting for and has a whole lot of potential ideas and concepts to explore. I give it 5 stars.