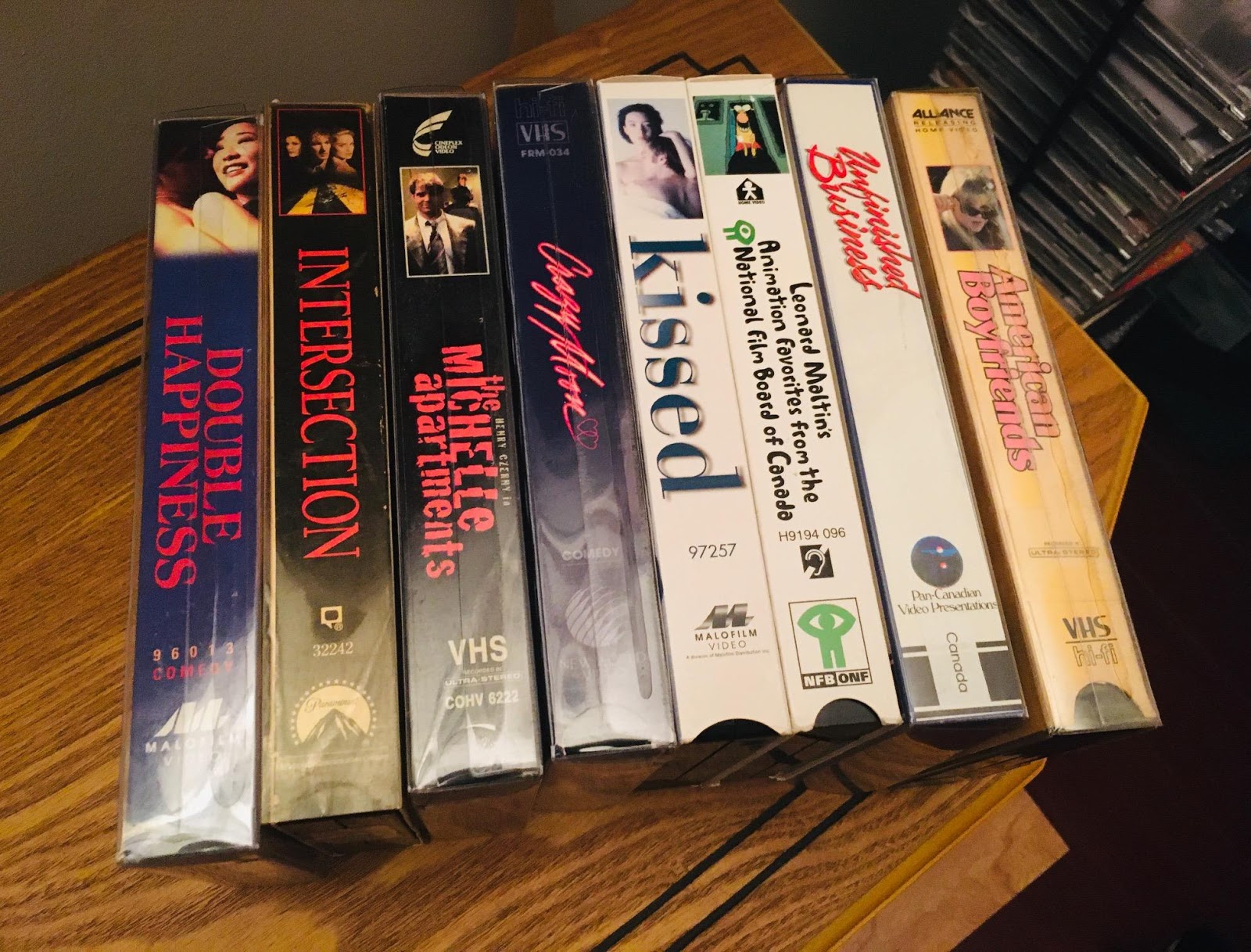 For the first time since pre-COVID era, I dusted of my VCR and put in a VHS tape. There were the usual tracking issues and the headache of the cropped pan and scan image after so many years of being spoiled by letterbox framing, but it brought a comforting sense of analog nostalgia missing from our overstuffed era of endless streaming digital video.

This lead to me liberating my video cassette collection from storage. There was the usual Hollywood classics, Hong Kong action flicks as well as the occasional anime tape, but a recurring feature in my collection were the long out-of-print Canadian titles of yesteryear.

Among this analog treasure trove is Kiefer Sutherland’s early starring turn as an awkward love struck Montreal kid in Crazy Moon. Also featured are early Vancouver new wave titles like Mina Shum’s Double Happiness and Lynne Stopkewich’s Kissed (films which marked the breakout roles of Sandra Oh and Molly Parker respectively). The sophomore effort of my Vancouver Film School directing instructor John Pozer, The Michelle Apartments boasts critical quotes comparing it to the likes of the Coen Brothers on its cover while a pair of unsung sequels to more readily available Cancon classics jockey for space. (Unfinished Business to Nobody Waved Goodbye and American Boyfriends to My American Cousin). Rounding out the assortment is a collection of NFB animation shorts hosted by Leonard Maltin and Intersection; technically a Hollywood production but one of the few modern ones to actually utilize its Vancouver shooting location as an actual setting.

The binding theme of this seemingly disparate collection of Cancon is its near universal unavailability in the digital era. Out of all eight titles, four (Kissed, Double Happiness, Intersection and NFB shorts) were released on DVD in North America although several of those titles are now out of print and fetching high prices on Amazon. Crazy Moon is only available as a UK import and the last three (American Boyfriends, Unfinished Business, The Michelle Apartments) are nowhere to be found on disc, including blu-ray. All are missing in action on conventional streamers (Netflix, Amazon Video) with only Intersection to be found on Video on Demand. The NFB shorts can be viewed by themselves on the board’s website, but without the Maltin segments.

By and large, Canada is a country short on reruns. Some of our most popular and influential shows like Beachcombers, Wojeck and The Littlest Hobo are almost completely absent from modern cable and streaming. On the big screen, most of our nation’s feature efforts tend to disappear shortly after their debuts. Anyone seen the delightfully quirky mockumentary Marrying the Family since its debut at VIFF in 2016? Yeah, me neither. Current Cancon rules for TV means that some shows can be seen on domestic cable, but usually only between the dead zone of midnight and 6am. That’s actually where I first discovered Crazy Moon on Encore Avenue some years back.

An increasing percentage of cinema seems to get lost as moviegoers upgrade formats. In fact, formats might not even be a factor as many consumers are on track to forgo physical media entirely in a gradual conversion to streaming where studios will gain a control over what gets shown to future generations in a way not seen since the vertically-integrated Golden Age of Hollywood. The production  and exhibition arms will once again be one.

A select few auteurs are lucky to have their canons preserved by the likes of the Criterion Collection and collaborations with American distributors. Cronenberg and Egoyan’s work are easily accessible to fans new and old, but good luck finding anything by anyone east of Ontario outside of a recent Hallmark flick they may have directed.

Additionally, so many Canadian film productions are lost in a quagmire of questionable copyright issues that it makes little financial sense to even attempt to release them. While Section 77 of the copyright act allows licences to be issued if unsuccessful attempts to track the owner are made in good faith, few will likely attempt to do this. For every resurrection story like Bye Bye Blues, there are hundreds of titles like Don Shebib’s Between Friends and Morrie Ruvinsky’s The Plastic Mile that remain MIA.

As usual, in the absence of action by the studios or the government, it’ll be up to collectors to keep obscure titles alive, whether on disc, tape or even actual film prints wherever they can be found. Knowing the time, blood, sweat and tears of the many players it takes to put a single production onto any screen anywhere, the most tragic thing that can happen to a completed film is for it to remain unseen.