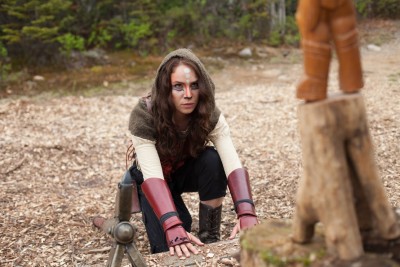 (Via PRNewsWire) The percentage of Canadians who watch Internet videos on their tablets went up in 2014: from 20 % to 26% among English speakers, but even more — from 16% to 25% — among French speakers. This and much more can be found in the 2015 Communications Monitoring Report, which is online here.

(Via CNW/Telbec) It’s time for Radio-Canada/CBC director Hubert T. Lacroix to go, says the  Syndicat des communications de Radio-Canada (SCRC) — in French, of course. The union says that, with the upcoming change in federal government, Lacroix and his team no longer have legitimacy. Representing over 3200 members, SCRC is unhappy with cutbacks and layoffs implemented by current management.

LARPs has returned — the series is four episodes into Season 2, which you can check out here. We’ll soon be bringing you more on this scripted web series that follows the lives (real and fantasy) of six players in a live action role-playing game. This season, new player Kat (Amber Goldfarb, pictured) joins the other characters. If you’re not familiar with LARPs, read Nick’s review from earlier this year.