Vancouver has doubled on-screen for many locations: Seattle, New York, San Francisco, Los Angeles, Maine, Washington D.C, London, and even India! But rarely has the city been given the opportunity to play itself.

Stuck between a distant Canadian film centre in the east (Toronto) and a cinematic powerhouse in the south (yes, Hollywood), Vancouver has been filmed countless times, but almost always dressed up as a different locale, a foreign identity.

Fortunately, Vancouver has been granted the opportunity to “come out” as itself numerous times in its 136-year history. This has often occurred through local productions, but even Hollywood and other international cameras have found time to allow Vancouver the dignity of maintaining its identity.

The following films represent ten of these efforts which are not always entirely set or even shot here, but still allowing us to see Vancouver on the big screen from various eras.

A byproduct of the British Cinematograph Films Act, this racially-charged film

was the work of California producer Kenneth James Bishop who opened

production in the British Empire.

Dispatched to investigate a crime wave in Vancouver’s Chinatown, crackerjack detective Donegal Dawn (Lawrence) discovers that a mysterious asian cult may be at work.

Equal parts quirky and cringe-inducing, this film provoked controversy even in

Ping Yang Lai calling for the film to be banned, all of which fell on deaf ears.

1938 to exclude films made outside Britain resulting in Secrets of Chinatown and its brethren gradually fading into obscurity. 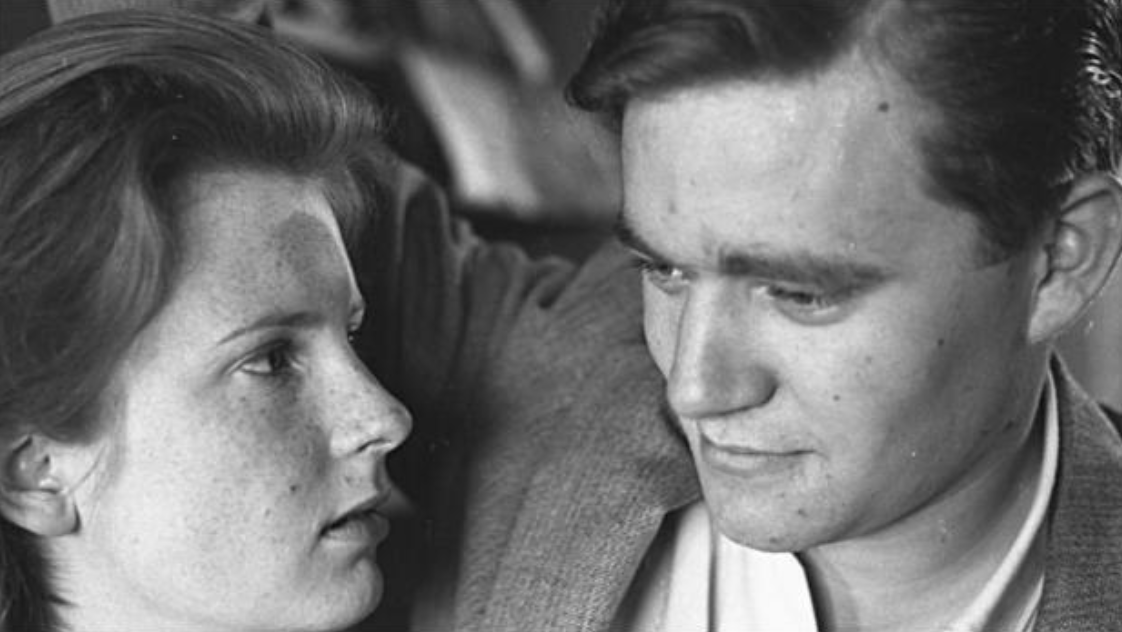 Long before Vancouver was granted the title of “Hollywood North”, UBC college student Larry Kent dared to lens this tale of suburban malaise and marital discontentment. Relying on a skeleton crew, looped dialogue, and often at the mercy of labs who objected to the film’s sexual content (including full-frontal female nudity),

Kent succeeded in completing the first feature lensed in Vancouver in years, but still faced barriers in distribution, which due to local censors, was mostly restricted to University campuses (UBC, McGill) and the US Midnight film circuit.

Deeply dissatisfied with their spouses and lots in life, printer’s assistant Des and kept-wife Laurie strike up a steamy affair that threatens to unravel both their lives.

Kent’s Vancouver (which one character dismisses as a “cultural backwater”) is nearly unrecognisable today with Laurie and Colin’s West Pender address overlooking an industrial-age Coal Harbour. Des drives his convertible south on Granville Street Bridge, yet somehow ends up in Horseshoe Bay where an early BC Ferries vessel 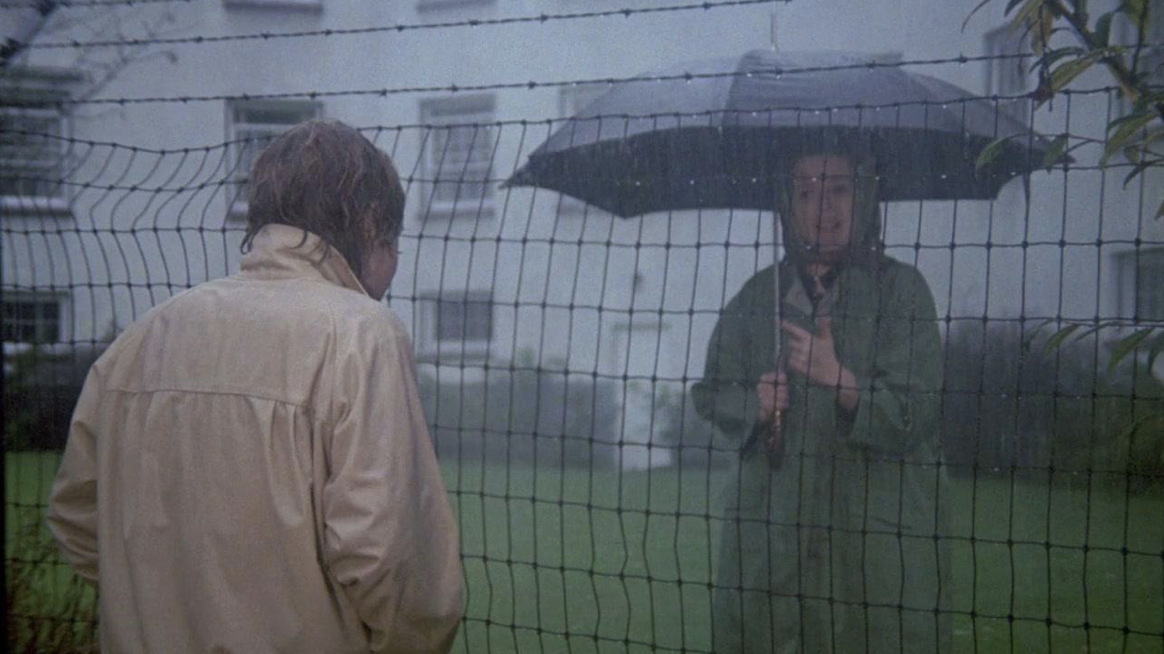 This early Altman work is largely set in the swanky apartment of Sandy Dennis’ slightly disturbed protagonist, Frances Austin who takes pity on a young stranger (Burns) stranded in the film’s titular park during a typical west coast downpour.

After giving him dry clothes and a cozy room, Sandy grows increasingly attracted to the mostly mute young man. Happy to take advantage of her generous nature, the young man fails to realise that this may be an arrangement with dangerous and even deadly consequences.

With the storyline mostly confined to France’s apartment, Vancouver is really only glimpsed through Young man’s occasional forays into the night including the Vancouver Art Gallery North Plaza (including a since-removed fountain) and the titular Tatlow Park. 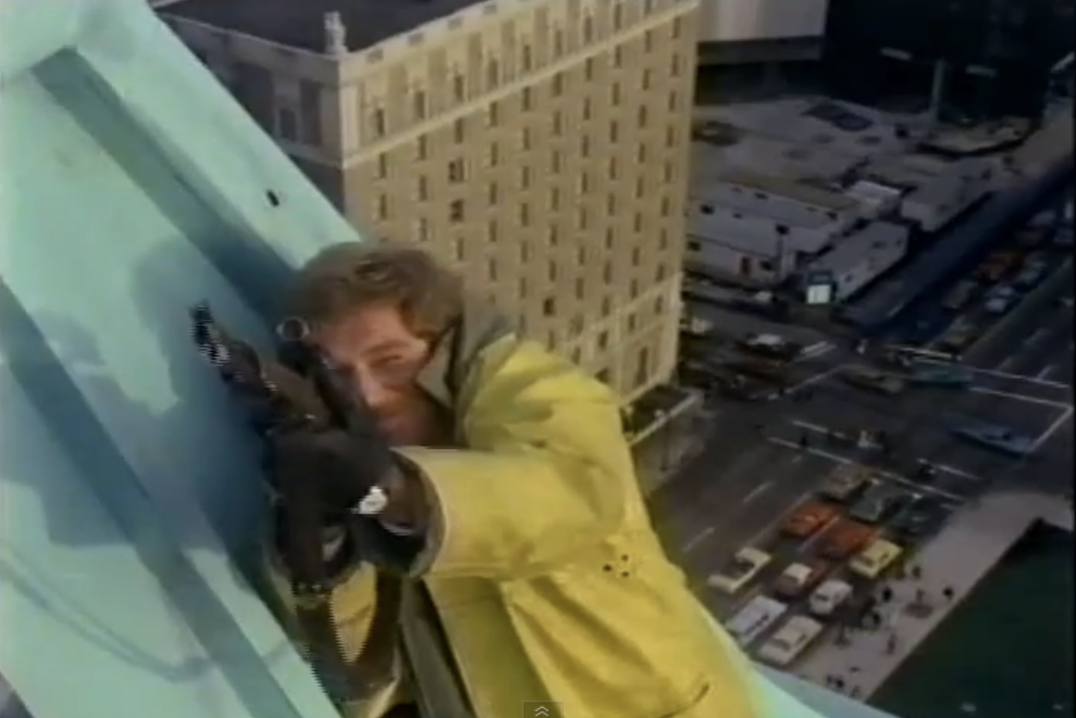 Made in the “Tax-Shelter” era of the 1970s, this cold war potboiler populated with American and British talent at least manages to give a more accurate depiction of the RCMP than Hollywood ever managed during its golden age.

After being strong-armed into discreetly arresting a Soviet expatriate, RCMP Corporal Jon Shaver (Segal) gets more than he bargained for as he winds up in the middle of a deadly assassination game.

A veritable smorgasbord of 70s-era Vancouver, the film is up front with its west coast setting, prominently displaying a Canadian flag before following Shaver as he crosses the Lions Gate Bridge. A hit man arrives at a nigh-unrecognizable Vancouver International Airport, Shaver meets a colleague atop the ever-scenic Grouse Mountain, tracks a lead through both Gastown and Chinatown before finally facing off against the KGB in a gripping finale on the Hotel Vancouver rooftop.

Eric Roberts gives a stellar performance as professional weasel Paul Snider who ropes a young Dorothy into the sparkly world of Playboy and Hollywood stardom.  As an unstable Paul increasingly finds himself pushed aside by her colleagues, admirers, and ultimately Dorothy herself, he decides to end it all for both of them in a brutally unspeakable final act.

Amusingly referred to as a “town” by Hugh Hefner (Cliff Robertson), Vancouver is briefly glimpsed in the film’s opening half as a cozy hometown that ultimately proves much too small-time to accommodate Paul’s ambitions for him and Dorothy. The characters are seen enjoying Vancouver institutions like the Penthouse Nightclub, the PNE at Playland, and Paul is hung out the windows of Robson Street’s Blue Horizon Hotel by a congested loan shark. 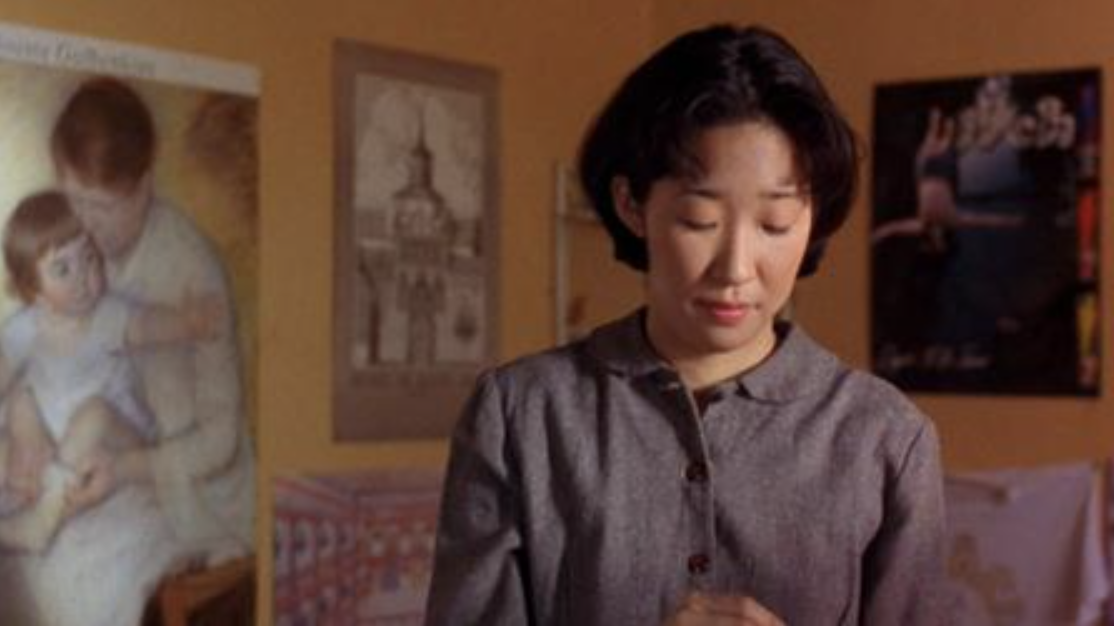 Sandra Oh gives a dazzling breakout performance as Jade Li; a woman caught in an intercultural web between her traditional immigrant family and the more progressive western world in which she lives.

When Jade finds herself attracted to an adorkable Caucasian man (Rennie), she is forced to make a choice between adhering to her strict family’s expectations or being true to herself.

Directed by then-local Mina Shum, Double Happiness basks in its Vancouver setting at a time when many Chinese were emigrating due to Hong Kong’s impending handover to China. Jade’s family spends ample time in Chinatown while Jade herself first meets Mark outside a gritty club in the Downtown Eastside and they later share a stroll on a beach near the Second Narrows Bridge. 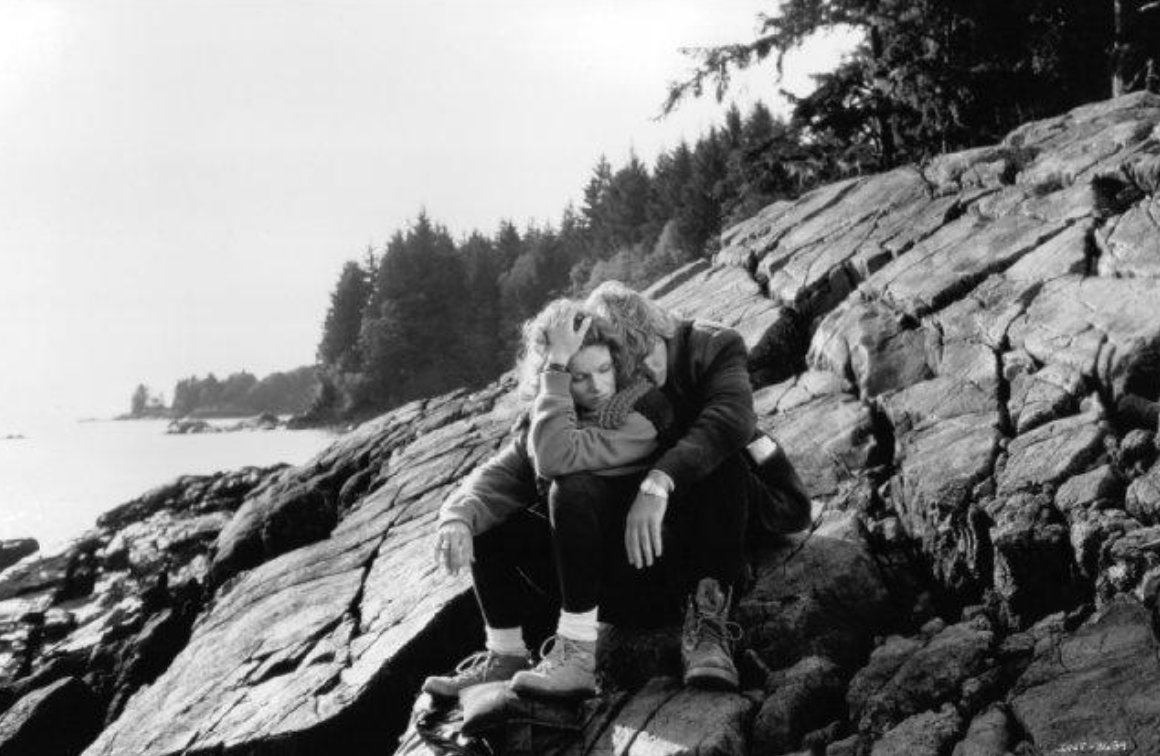 While on a collision course at a lonely country intersection, star architect Vincent

Eastman (Gere) flashes back on the life decisions that lead him to this moment.

Fallen out of love with his icy wife (Stone), Vince has found solace in the arms of redheaded journalist Olivia Marshall (Davidovich). Struggling to balance his new life with his old one, including a teenage daughter (played by Jennifer Morrison of Once Upon a Time fame in her acting debut), Vince must decide where his true happiness lies or be left with nothing.

A remake of 1969 French flick Les choses de la vie, this average Hollywood melodrama is surprisingly open about its Canadian setting. The characters are shown living and working in Gastown, enjoying Granville Island, and rubbing elbows at the Museum of Anthropology. Vince is even shown using Canadian currency and stamps. 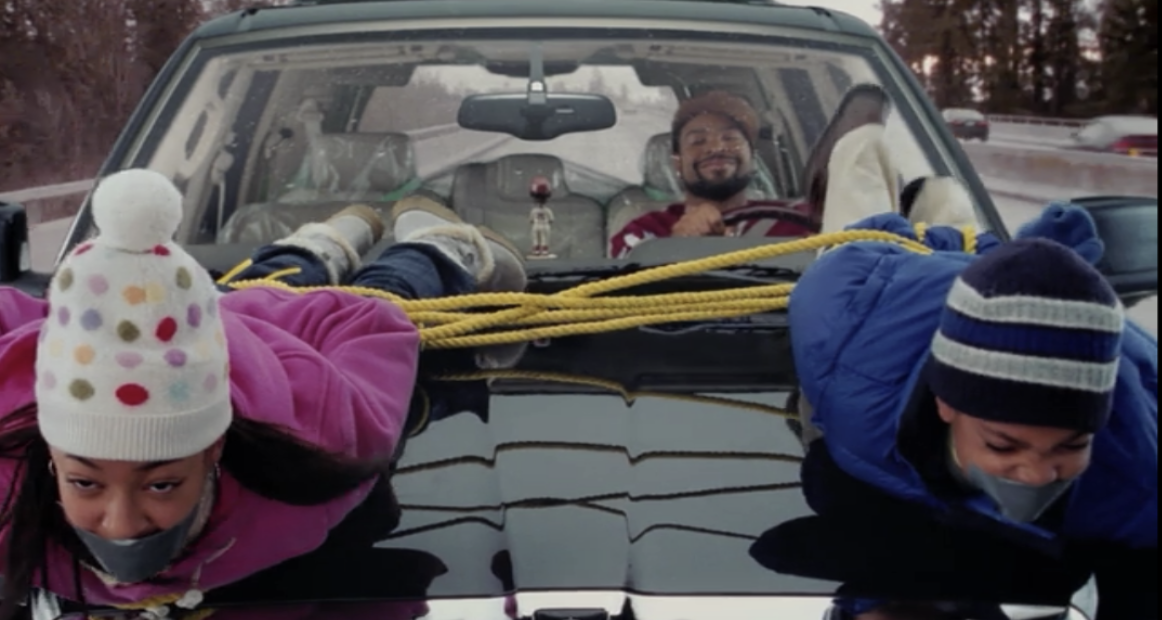 Vancouver has played the part of Oregon, Washington State, and occasionally itself, but only in this low-brow family comedy from Brian Levant does it play all three!

Still trying to prove he can be a bankable leading man, Ice Cube plays ex-football

With Suzanne reluctant to take the relationship outside of the friend zone, Nick offers to drive her two kids (played by Allen and Bolden) from Portland to Vancouver when their deadbeat dad bails out.

Believing their Dad will reunite with their mom, the kids go out of their way to make the trip a living hell for Nick as they slowly make their way north (without ever actually leaving the lower mainland!)

While the bulk of the film takes place stateside (with Vancouver International Airport and Pacific Central Station doubling for Portland counterparts), Vancouver gets to play itself in scenes featuring Coal Harbour and the Fairmont Hotel.

Brent Butt hangs up his gas nozzle and relocates to more metropolitan digs in downtown Vancouver as Leo Falloon whose his small-time marketing office is mistaken for the private eye a few doors down by bombshell Kyra (Smart) who convinces an unqualified Leo to take up the case of her missing brother. In over his head, Brent clumsily attempts to unravel the increasingly complex mystery before he himself finds himself at the wrong end of a gun barrel.

The film goes out of its way to show off Vancouver by opening with an epic aerial shot of the skyline with Canada Place and Harbour Centre clearly visible. A body is found at the Pandora Hotel on the Eastside, Brent and his buddy Ernie (Koechner) hang out at the Smile Cafe on West Pender (at least on the outside) and Leo faces off against the villain on a Yacht plying the waters of False Creek. 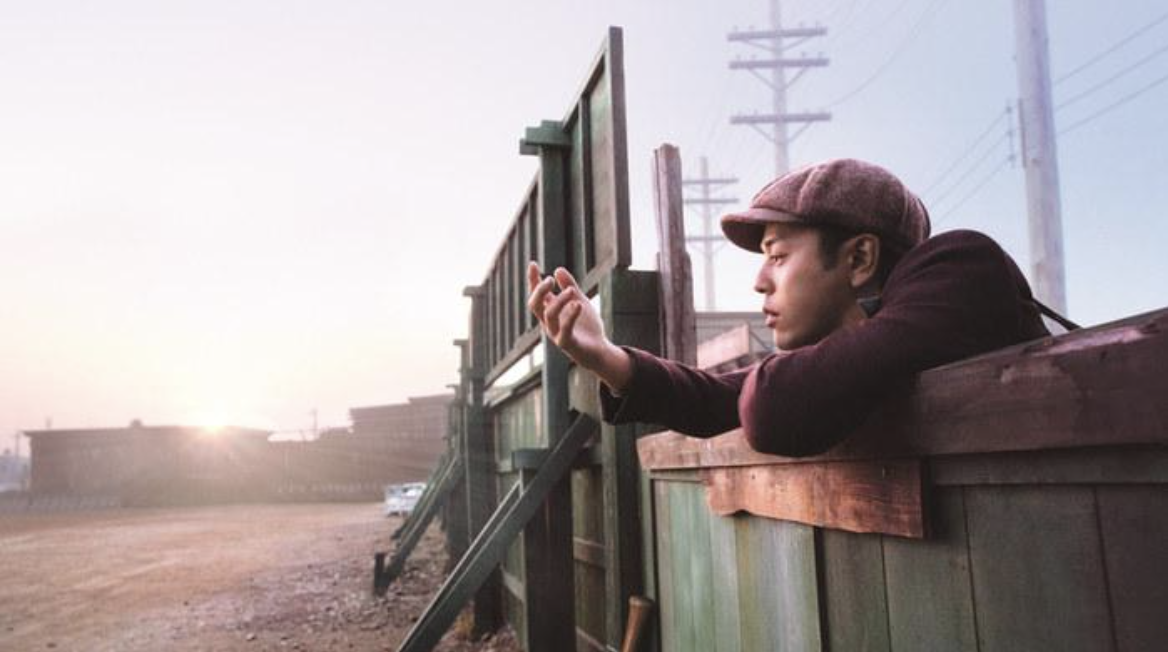 A star attraction at the 2014 edition of VIFF, this big-budget historical drama concerns the rise and eventual demise of the legendary Vancouver Asahi baseball club.

Set in the midst of the great depression, Reggie and his Asahi teammates rise from zeroes to heroes as they employ their “brain ball” technique to compensate for lack of brawn.

While most of the filming took place overseas with Vancouver’s long-lost Japantown being painstakingly recreated on Japanese sound stages in Ashikaga, the west coast itself is seen in 2nd unit shots and at least one scene taking place in Stanley Park.