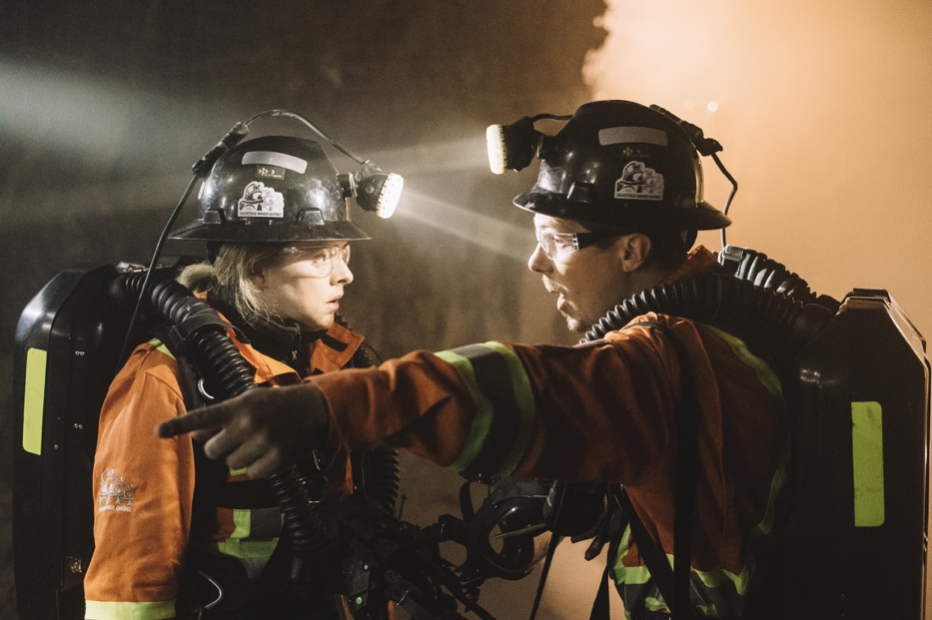 The 2006 Wolfgang Petersen disaster flick Poseidon (a remake of the 1972 Poseidon Adventure) was harshly criticized upon its release for many things, but mostly for the rushed first act where the cast of characters to be put in peril were only barely introduced and set up. Underground, the 2020 sophmore feature of Sophie Dupuis sells itself as such a film, diving straight into a mining disaster in Quebec’s Val d’ Or region where the hotheaded rescue team member Max (Joakim Robillard) clashes with team leader Catherine (Catherine Trudeau) on how to proceed with the recovery effort.

This adrenaline-pumping sequence soon gives way to a feature-long flashback two months prior, showing these and other characters in less-stressful times. Not stress-free for Max himself mind you as he finds himself dealing with his wife (Lauren Hartley) miscarriage and the fallout from a DUI incident that has permanently disabled buddy Julien (Théodore Pellerin). The latter of these has driven a rift between Max and fellow miner Mario (James Hyndman) who also happens to be Julien’s father.

A near-hour of melodrama leads to the inevitable off-screen explosion (Telefilm ain’t made of money), leaving Mario and others trapped and possibly dead. It is here where we finally catch up to the present to witness an attempted rescue where we already partially know the outcome. What fun.

If this review gives away too much of the plot, feel free to blame the bloated story structure. An excess of build-up with a deficit of pay-off. It certainly fails to do justice to the pair of expert performances from Robillard and Pellerin who elevate what material they can whenever their brother-from-another-mother-ly love graces the screen. It’s a huge disservice when the two are giving everything they got for the film’s coda yet I couldn’t bring myself to care.

There are certainly hints of meaningful drama spread throughout, but the disaster elements feel slapped on for sheer marketing value and by the time the film finally gets to them, the audience is too lethargic to care. Devoid of much agency, Underground is content to seize you by the lapels and hope you die of boredom before taking further action.

Underground screens as part of a virtual Whistler Film Festival, available to screen online until Dec 31.