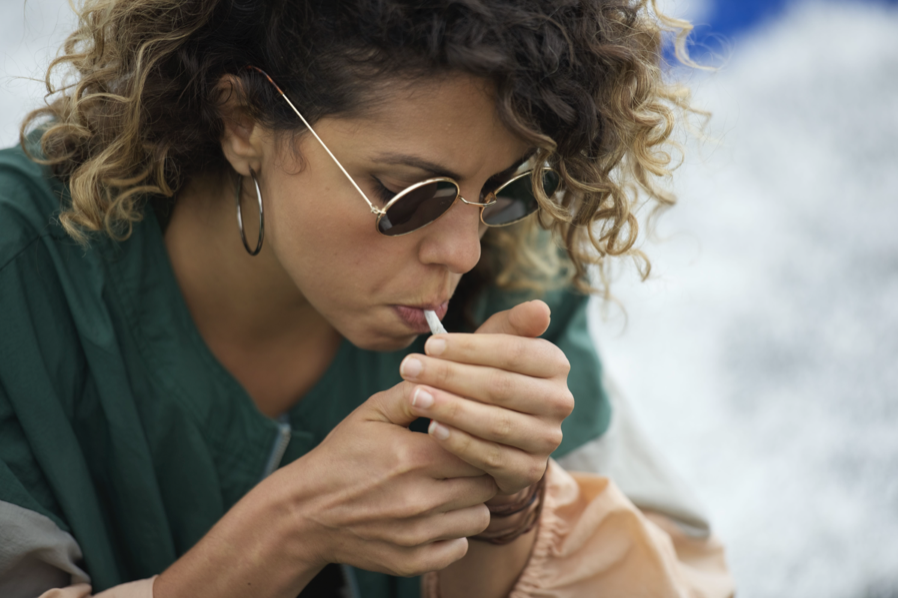 It was only just recently with another Whistler Film Festival entry that I found myself yet again bemoaning the continued Americanization of our taxpayer-funded Canadian content. It’s been endlessly frustrating to see local locations and faces consistently morphed into stateside settings for ostensible worldwide consumption. While it’s expected for Hollywood productions to do this, I find it an unacceptable state of affairs that our own institutions continually support films that have near zero Canadian identity. Having recently reviewed yet another example of this trend (Hammer, an otherwise excellent effort from Christian Sparkes), I was more than pleasantly surprised to see a True North story of marijuana legalization grace my screen with Canadian Strain.

Amusingly juxtaposed with old film strips and contemporary news footage, Strain explores the impact of cannabis-gone-mainstream as seen through the eyes of veteran dealer Anne (Jess Salgueiro). With weed set to grace the shelves of local Shoppers Drug Marts everywhere, her customers (dear old Grandma included) slowly abandon her for the new and exciting world of retail and apps which she finds herself unable to compete with.

With no customers and a surprise eviction to contend with, Anne attempts to transfer her wealth of pot community knowledge to the public sector via the newly-formed CDCBO (Cannabis Distribution & Control Board of Ontario). She is dismayed to find that her near-decade ofexperience translates to being an “admitted criminal” in the Province’s eyes which even sympathetic government drone Judy (Naomi Snieckus) has trouble looking past. She also finds little comfort from fair-weather friend Beth (Hannah Spear) whose hook-up with acid-tongued Queenpin Valerie (Natalie Brown) deals with much harder substances than Anne is willing to take on.

With both legal and illegal avenues seemingly closed off to her, Anne struggles to find her place in a world that she and others like herself had fought for. After all, how can you go legit when the Government is the biggest gangster in town?

Director Geordie Sabbagh has delivered a superb effort on his second feature. With an excellent cast headed by a confident leading turn by Salgueiro and a solid grip on the subject at hand, Strain shines in all the best ways with plenty to say and its tongue firmly planted in cheek. The hilariously idealistic documentary sections perfectly contrast with the less-than-ideal narrative and are truly an excellent touch. Unlike other indie efforts, Strain never writes cheques its budget can’t cash. All the effort is focused on a key core of characters and it pays off handsomely. Large in scope, but local in focus.

With Uruguay the only other country to legalize cannabis (a handful of others have decriminalized it), Strain is an exclusively Canuck-flavoured story ripped from the headlines. Whether you consume yourself or not, you’ll no doubt find yourself enamoured with Anne’s plight as she struggles to do the right thing in a world that seems to have left her behind. A massive cultural shift is always messy with many trade-offs to contend with. Perhaps Strain will help to smooth out that transition.