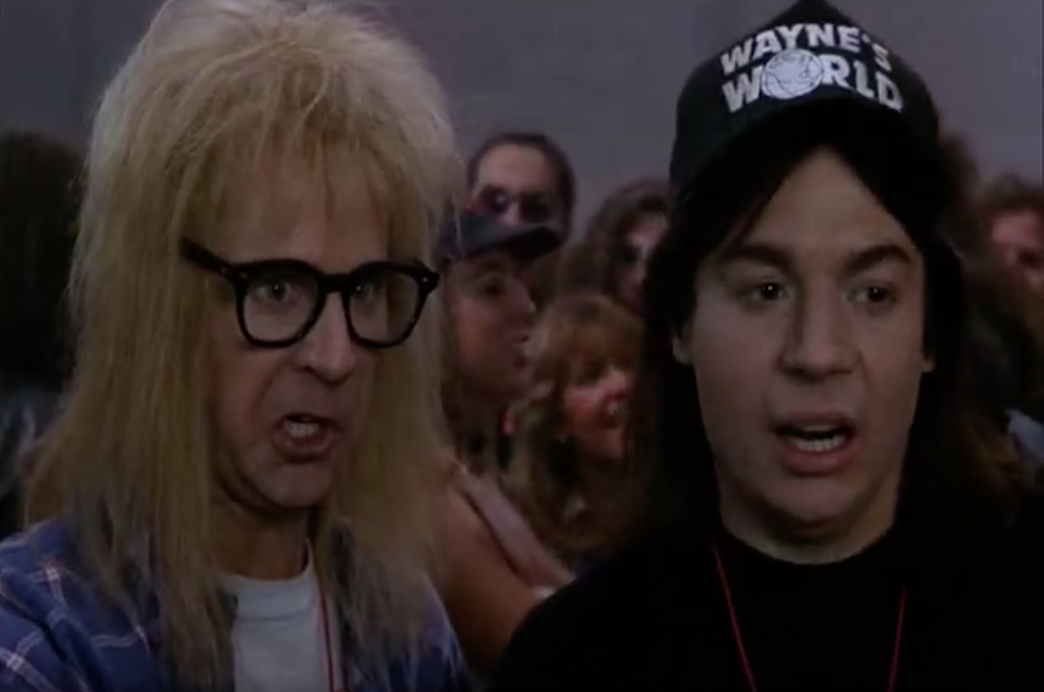 Mike Myers may not be the household name he once was, but the Canadian’s films and their accompanying library of quirky characters have made an indelible impression on the world comedy, beginning with 1992’s Wayne’s World. Though the film features infectious dialogue that will have me saying “Excellent” very differently for some time, this is not quite the adjective I would use to describe the overall quality of the film. With this being said, Wayne’s World is still an enjoyable comedy populated by likeable characters, while featuring some truly inspired satire and pop culture references that still hold up today.

For those of you who don’t know, Wayne’s World is based on a Saturday Night Live sketch featuring the film’s lead characters, Wayne Campbell (played by Mike Myers, who originally created the characters and co-wrote the screenplay) and Garth Algar (depicted by fellow SNL alum Dana Carvey). The duo host a low-budget cable show in the basement of Wayne’s parents’ house titled, you guessed it, Wayne’s World. The show catches the attention of seedy television producer Benjamin Oliver (Rob Lowe), who purchases the rights to the show from Wayne and Garth, promising to promote them to a larger audience, when in fact he intends only to exploit and manipulate the show for his own gains.

The two most crucial aspects of the entire film are in fact Wayne and Garth themselves. It is difficult to conceive of such characters coming out of the ‘80s without giving in to the safety of cinematic head bangers that have come before. Yet, thanks to Penelope Spheeris’ direction and the performances of Myers and Carvey, Wayne and Garth traverse a minefield of clichés, and to my own amazement, emerge practically unscathed! To be honest, I was sold on their characters the moment they jammed to ‘Bohemian Rhapsody’ (which everyone has done at some point), but their surprising relatability and well-timed maturity only grew on me from there.

There are, however, occasional scenes in the film that stand as stark reminders of the fact that the characters stem from sketch comedy, and not for the better. One scene features Wayne and Garth playing street hockey together, moving the goals off the street and back again with every passing car. Apart from very brief dialogue on their views of Benjamin, the scene otherwise feels disconnected from the film as a whole, culminating in some physical comedy that only adds to its out-of-place sketch-like tone.

Thankfully this is not always the case, as other bridging scenes work much better when its supporting cast are interacting with one another. At one point Ed O’Neill’s character, the hilariously twisted manager of the Donut bar at which Wayne and his group frequently gather, talks about payday and unemployment with Mike Hagerty’s down-in-the-dumps Davey to great comical effect. Scenes like this never overstay their welcome, and contribute to the vibrancy of Wayne and Garth’s wacky world.

Without doubt, my personal favourite moments are when the writers and Spheeris use Wayne and/or Garth’s sketch comedy background to make hysterical jabs at commercialism while still actually advancing the story, most prominently found in a scene which features intentionally deliberate nods at product placement. To see Garth clad head-to-toe in Reebok, and then lamenting with a tongue in cheek manner “It’s like people only do things because they get paid and that’s just really sad” gets me every time.

It is ingenuity like this that makes Wayne’s World such a timeless comedy, even if, much like SNL, it does not strike the right chord every time, particularly in its jarring ending. Regardless, I am sure even a feature like Deadpool, and its upcoming sequel, owe a creative debt to Wayne’s World with its well-conceived breaking of the fourth wall, albeit minus the R-rated edge. Yet, let us not forget that Wayne’s World’s self-aware structure is an effective catalyst not just for its commentary on commercialism, but also predictable filmmaking practices, having more to say thematically than your average comedy…only with a big smile and playful wink.