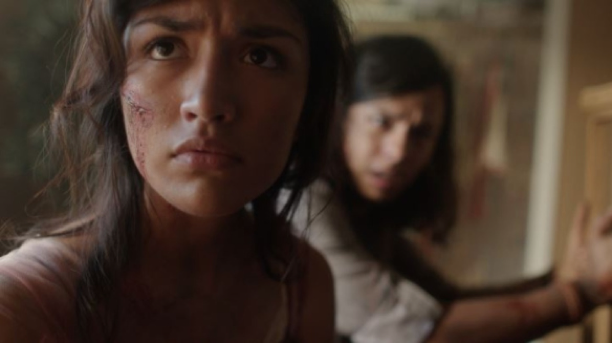 One of the lesser known traditions of our other neighbours to the south is a Quinceanera, a sort of sweet sixteen for young women, only at fifteen years old and more akin to a wedding (albeit groom-less). And like any other event involving large groups gathered in celebration depicted in movies it is a prime target for interruption into utter mayhem. The spicy grindhouse gore-fest, La Quinceanera is certainly no exception.

Told across seven segments (more on that later), our tale unfolds around the Quinceanera of the reluctant Alejandra (Mia Xitali), who resents the spectacle and is on bad terms with her father (Mauricio Mendoza) due to an argument over her future in the family’s restaurant. Turns out the eatery has been doubling as storage for a local drug cartel and when some of product and cash go missing due to the irresponsible actions of her shiftless brother Santiago (Gustavo Gomez), some unwelcome guests crash the party in the form of maniacal siblings Chavo (Mathias Retemal) and Beatriz (Veronica Diaz Carranza), children of merciless local boss Angelica (Bertila Damas).

When the customary assault and intimidation fail to produce any contraband, the film whips out it’s R-rating as all manner of blood-soaked hell is unleashed on our unsuspecting protagonists. The cartel has bitten off more than they can chew however as Alejandro and her family (including badass Grandma played with zeal by Gabriela Reynaso) fight back with a vengeance. As the bodies pile up and bad blood splatters, it all culminates to a showdown at the local cop shop that even Arnold’s T-800 might think twice about attending.

Like a Grindhouse film Robert Rodriguez never got to direct (Planet Terror notwithstanding), La Quinceanera grabs you by the cojones and never lets go. The characters are instantly well established and rounded allowing you to root for or jeer against them with reckless abandon. The effort is buoyed immeasurably by a superb cast from the fresh-faced, yet deadly Mia Xitali as our girl Alejandra to Mathias Retemal as Chavo who has improved immensely since his tepid first season turn on Romeo Section. The action is also a thrill to watch as no holds are barred and no one is left unscathed.

The cinematography doesn’t fare nearly as well given that DP Luke Bramley seems hell bent on giving everyone their close-up and then some. The utter lack of wide or establishing shots give the unfortunate impression that the production is trying to compensate for a lower budget (and given the amount likely spent on fake blood, perhaps they were). This is forgivable on rough-and-tumble indie productions, but reflects rather poorly when you have Warner Brothers listed in your credits.

As previously mentioned, the story unfolds in episodic form which was later confirmed by the filmmakers in a post-screening Q&A to be the result of the story having originally premiered as a webseries at the studio’s insistence. While it’s not unheard of for film’s to be broken up into chapters, the cutting and pasting here is rather haphazardly done with the soundtrack screeching to a halt at each title card and small recaps of what we’ve already seen literally seconds ago replaying before the story resumes. Surely a more streamlined version could have been prepared for this feature-length festival presentation.

In any case, La Quinceanera provides ample thrills and certainly more sheer entertainment value than you would expect from a Canadian production at a non-genre festival. Presentation issues aside, this type of adrenaline-pumping cross-border genre content shows great promise in our current media-saturated landscape. The ending leaves plenty of room for a follow-up which I eagerly await should one come screaming down the pipe.