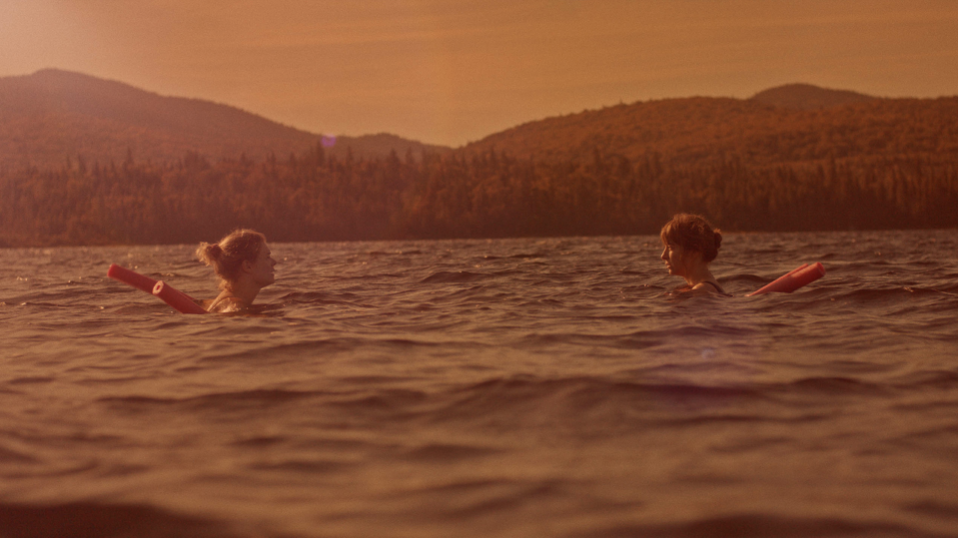 If I’ve ever been hesitant to enjoy a weekend getaway at a cabin in the woods, it’s likely because my cinematic education has led me to believe that nothing good can come of such a trip. The isolation from everyday life forces long-simmering problems and issues to the surface and if that wasn’t bad enough, a brutal and painful death always seems to be lurking around the corner from strangers, wild animals, the elements or perhaps even your fellow cabin-mates. The debut feature of filmmaking duo Dusty Mancinelli and Madeleine Sims-Frewer doesn’t exactly depart from this tradition, but instead amplifies it to a gut-wrenching level that goes far beyond the tolerance of most moviegoers. Without further ado, let’s unpack Violation.

This film is impossible to review without spoiling some story elements. You’ve been warned.

Miriam (Sims-Frewer) and her husband Caleb (Obi Abili) are visiting the former’s sister Greta (Anna Maguire) and spouse Dylan (Jesse LeVercombe) at a cabin deep in the heart of Québec (at least according to the licence plates). Miriam and Caleb seem to be on the verge of divorce and some lingering wounds between the sisters haven’t quite healed.

The only member of the foursome she gets along with is Dylan with whom she can at least carry on a meaningful conversation with. One of these chats by an open campfire ends with Dylan taking advantage and raping Miriam as the embers die out. Convinced that Miriam had led him on (an impulsive kiss had preceded the crime) and with Greta refusing to acknowledge any tarnish in her husband’s armour, Miriam is left with a burden she doesn’t know how to unload. But not for long…

What follows is one of the most graphic first-degree murders that has ever unfolded on screen. Other murders have been bloodier, gorier, louder and even more “spectacular” in execution, but never have I been more uncomfortable watching a living, breathing human being slowly suffocated, drained of blood, dismembered, bones broken and then crunched into powder with whatever remains burned or flushed down the toilet.

Previous rape revenge films (I Spit on Your Grave, Last House on the Left), give us disgusting and depraved villains to root for and any trauma is promptly exorcised in the final act via brutal retribution by either the victims or their family members. There is no such relief to be found here. Miriam’s rapist is no poster villain, but a trusted friend and his cold and calculated murder at her hand only seems to traumatize her further and amplify her rage. While transporting the remains, she takes time to angrily berate a man for bullying his wife (he shoves her and takes her glasses during an argument). There’s no tidy ending to be had in the film’s 107 minute runtime. Any healing will be beyond the film’s purview.

Miriam herself is also not a particularly likeable character. She has a short fuse, is awkward in social situations and while the audience can sympathize with her quest for revenge, having to watch it unfold so thoroughly make us less comfortable with that decision. She retains our empathy if not always our sympathy.

Mancinelli and Sims-Frewer use every tool in the box to effectively glue the audience to the screen. Macro-cinematography, immersive sound design and surrealist VFX all converge to immerse the viewer in Miriam’s fractured, non-linear universe. The small cast don’t so much play their characters as inhabit them. This is all really happening. The camera is just along for the ride.

A word on the film’s practical effects: they are so effectively visceral that if not for his recurring role on Murdoch Mysteries, I’d have the authorities combing the filming locations for LeVercombe’s remains. It really speaks to the talent involved that the camera can linger as long as it does with not a seam or trick visible. Seriously well done.

Violation is one of the toughest films I’ve ever had to review on this site (and that’s after quite a few experimental titles). To say that this is one of those movies that sticks with you is a severe understatement. The audience is left with some very difficult truths to digest and feelings to sort through as the end credits roll. If not for a deadline, I’d still be processing its impact myself. Given the content, I can recommend it on an academic level, but not a personal one. Watch at your own risk.

Violation can now be streamed on Shudder