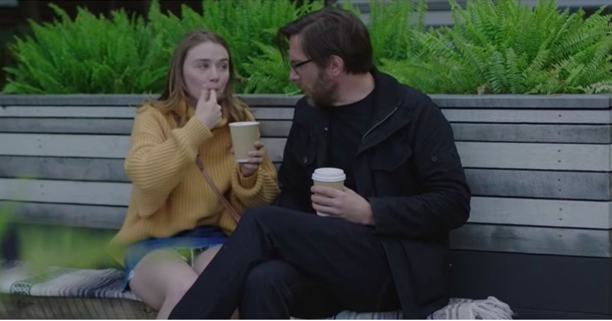 “Romance is dead” concludes college journalist Blake (Jessica Barden) in her latest romance column. Raised on Nora Ephron rom-coms but surrounded by a hook-up culture fuelled by dating apps, she has grown disenchanted with modern dating. This fact has not gone unnoticed by her exasperated editor Matt (Avan Jogia) who promptly kills the column and assigns her to the culture beat instead.

A case of accidentally swapped IDs enroute to review a concert acquaints Blake with the streetwise Morgan (Riverdale’s Camila Mendes) who has been living large and student debt-free by means of an older, wealthier sponsor. Realizing there is a whole generation of girls trading sex for financial stability, Blake goes full gonzo by deciding to become a “sugar baby” and living the story herself in order to revive her flagging future writing career.

She swiftly sets her sights on published professor Ian (Timm Sharp) who is more than happy to make the arrangement. Showered with expensive gifts and dates to five star restaurants, their relationship might seem romantic if you turn the sound off. But Blake soon realizes that with no room to grow as a real couple, the whole deal begins to accumulate costs than not even Ian’s cheques can cash. With her article growing and her self-worth eroding, Blake may soon have to decide if this “new romantic” reality is really worth falling in love with.

The New Romantic starts out almost like a Hallmark script shot through a mumblecore lens, but very quickly finds it’s own voice. It has a lot to say about modern dating and just how much real connection we’re willing to sacrifice for a little fun and material gain. Director Carly Stone weaves a compelling tale from her own snappy screenplay that may seem fantastic at times but never fake. The film is well-paced as it pulses to a grooving soundtrack featuring Timberwolf, Peach Dream and Jude Shuma.

A solid script deserves a first-rate cast and Stone has certainly brought one on board with Jessica Barden bringing a naivety, spunk and eventual wisdom to Blake. She’s joined by Hayley Law (also of Riverdale fame), infusing her turn as stoner BFF Nikki with an endearing jaded charm. Also on board is Brett Dier as fellow college journalist Jacob who might be just what the Nora Ephron rom-com ordered.

“Very zeitgeisty” exclaims editor Adam as he reads Blake’s first piece on her sugar baby journey. It’s an adjective that also applies to New Romanticas it asks tough questions to it’s audience about relationships in the social media era. Fortunately it does so without being heavy-handed. The look on Blake’s face during a passionless tryst with Ian says far more than any blog post could.

The New Romantic screens as part of VIFF at the Rio Theatre on Thursday, Oct 4 @ 9pm