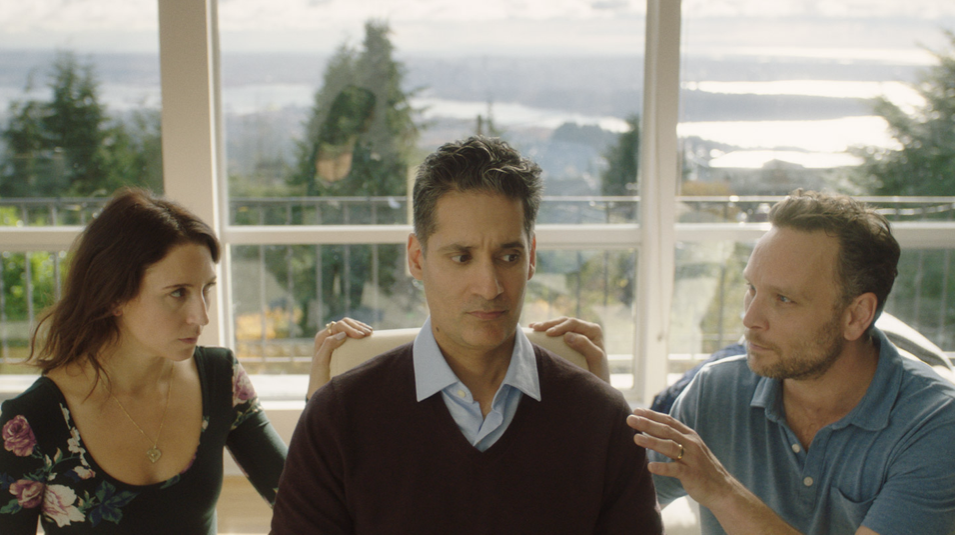 It is said that the first step to solving a problem is to admit there is one. The protagonists in Vancouver thespian David Milchard’s debut directorial feature Fucking Idiots do at least this much. Actually taking responsibility for said problems is another matter entirely.

When the vaguely-wealthy Paul (Stephen Lobo) agrees to host married friends Mike (Ben Cotton) and Sarah (Christina Sicoli) for the weekend in his spacious North Shore home, he has no way of knowing the baggage the duo have brought along.

Apparently dead broke after a relentless spending spree, Mike and Sarah have decided that the only explanation for their utter lack of thrift or self-control is that they’re both “fucking idiots” that need to be violently reprimanded. Having brought along ropes, cords and other implements of pain-infliction, the two attempt to convince Paul that he’s the only one who can administer this particular brand of aversion therapy.

But Paul has skeletons in his own closet and one arrives in the form of high-class prostitute Venice (Sara Canning) sporting high heels and low tolerance for Paul’s delinquent bills. Did you hear the one about three broke idiots and a hooker? Tune in to see the punchline.

Fucking Idiots has a lot on its mind about rampant consumer culture and the lack of personal responsibility when confronting first world problems. These themes are explored gingerly and almost sparsely depending on your interest. In any case, Milchard keeps things moving for this 85 minute dark comedy. It’s an almost guilty pleasure to witness the stellar cast at work here as their circumstances inevitably spiral out of control. From Cotton’s manic bursts to Canning’s cool and calculated presence, there’s not a weak link in the bunch.

I wish I could say the same about the film’s cinematography. It’s all framed well enough, aided by the gorgeous panoramic view of the Burrard inlet, but as soon as night falls, it’s all the practical lights can do to keep the actor’s faces properly illuminated. Not hard to guess where the budget got cut.

“100% Vancouver BC made” as the end credits puts it, the film succumbs to the usual CANCON syndrome of not setting their story in any particular place. It’s certainly the Vancouver skyline we see outside Paul’s panoramic window, Lions Gate Bridge and all, but any direct reference to geography is carefully omitted in hopes that a potential American distributor will mistake it for Seattle.

Fucking Idiots puts its best foot forward as a showcase for this generation’s finest crop of Vancouver actors, both in front and behind the camera in this case. If only the characters they play were allowed to be in Vancouver as well.

Fucking Idiots screens as part of VIFF at the Vancity Theatre on Sept 30 @ 8:45pm and virtually until Oct 7