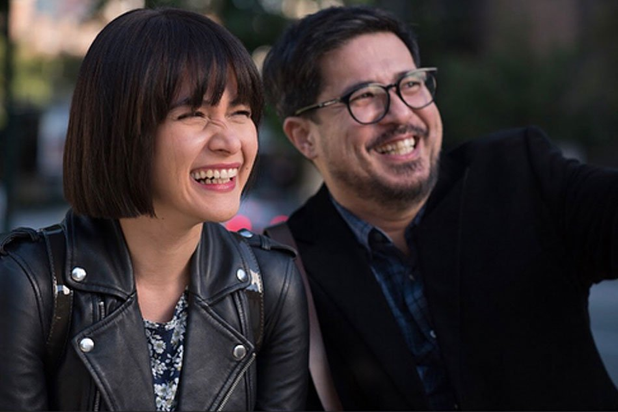 I’ve often written in this column about my continued frustration with the lack of productions produced in Vancouver that are actually set here. Hundreds of hours of film and TV are shot in this beautiful city every year, but our identity is consistently disguised under a barrage of production design and visual effects. I suppose that’s why it’s still a relative shock to see our skyline presented on-screen so frankly as is was it was in the Filipino melodrama, First Love.

Lonely bachelor Nick Gutierrez (Aga Muhlach) has just sold his shares in his venture capital firm for a cool $1.7 million expecting to begin an early retirement. He certainly didn’t expect to come to the assistance of the spunky Ali Castillo (Bea Alonzo) as they both help to save the life of a man collapsed from a heart attck. Thrust together under these unusual circumstances, Ali decides it must fate and that they should give dating a go. Nick is reluctant at first, but after some prodding from his teenage surrogate son Simon (Edward Barber), he relents to fate’s whims.

Ali reveals to Nick early on that she herself has a weak heart and is eagerly awaiting a donor. She is no closer on the recipient list though and is slowly draining of hope. After a sudden collapse on a date, Nick reveals that he too has a debilitating condition; an ostensibly inoperable brain tumour that could kill him at any moment. Faced with their own mortality, the couple decide to fight their conditions together, each supporting the other in their fight to live just one more day. But will the fate that brought them together also pull them apart?

First Love is the biggest bowl of cinematic milk duds I’ve consumed in a while. It’s all very thick, chewy and really bad for you, but damned if I didn’t enjoy it just a little. I’ll get the bad out of the way first. The whole screenplay feels like a romance written by someone in middle school whose only familiar with these stories in passing. Nick and Ali act more like children than adults, their meeting and decision to date is far too contrived and the sappiness of the whole production will leave you feeling more sticky than any of the theatre snacks.

That being said, you’d have to be dead inside not to moved a little by the story of two terminal people in love fighting to make every day count. The theme of carpe diem is relentlessly beat over our heads almost every few minutes, but it’s an important one. There’s a stronger concept here than the story’s execution reveals and one I’d like to see re-visited (remake anyone?).

Easily the film’s strongest asset is Bea Alonzo. Her spirited performance as Ali will have you fall head over heels for her on sight. Her screen presence in infectious and will easily get you through the film’s more cringe-worthy moments. I never completely warmed to Aga Muhlach’s awkward portrayal of Nick, but he comes off far better compared to some of the likely non-union supporting cast (a brain surgeon comes off positively robotic).

Shot this past summer, First Love renders the city of Vancouver the best I’ve ever seen it. I got a big kick out of seeing the characters romp through familiar locations in Gastown, Granville Street, Science World and Lonsdale Landing. It’ll likely mean little to most reviewers, but to see a movie unmistakably set in Vancouver (it’s confirmed in the dialogue) and showing it’s sunny side to boot means a lot to me. For this alone, the film scores a bonus point.

A small note that the film’s dialogue is principally in the Tagalog dialect often interspersed with english, all with subtitles. This is a little disconcerting for the average viewer but is barely noticeable after a few minutes in.

This is the second film I’ve seen this year to portray Vancouver through a foreign lens (the other being THE DARLING reviewed here). Vancouverites are notoriously cynical about our city, but then again we have to live in it. Maybe we’d feel more proud if we saw ourselves reflected in pop culture more. First Love may be half-baked in it’s storytelling, but it took a chance on our city and I’m very thankful for that. Consider tuning in to see what Vancouver could look like on screen.

First Love is currently screening in theatres in Vancouver and Edmonton