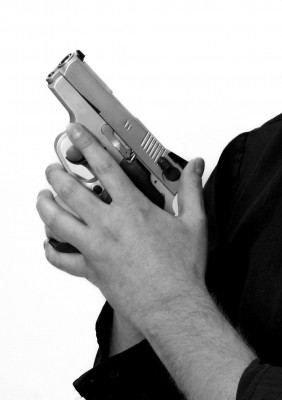 La Derniere Rondelle – Oh look, it’s by Travelling. Surely one would expect a little bit of weirdness? In this short and simple film, there’s not much going on. It stars Yvan (Guy Thauvette) as a retired man playing one last game of hockey. But his last “game” consists of him being on the ice alone shooting pucks while his wife watches. This one is so slow paced that there isn’t much to say at all. After nearly seven minutes of mundane hockey playing and shower taking, things finally get emotional at the end. And I don’t know why I was expecting some absurd joke by Yvan or his wife in there. Even the dialogue is so minimal the rink deserves more credit for background noise.

Hostage – Okay, there wasn’t much to this one either. We get only six minutes of a hispanic criminal (Shane Pollard) having taken hostage a Korean lady (Joanna Jang). He manages to evade the nearby police officer (Rob McKee) who’s too focused on his garbled radio. After that the hostage nearly dies from suffocation and the hostage taker himself is suddenly panicking. But upon reviving she can’t understand what he’s saying because he doesn’t speak English. Some of the words like “diablo”and “Stupide” are understandable though. Our criminal starts to feel sorry for the woman he took. This had a good dramatic feel but it wasn’t long enough. It should’ve been longer. What also bothers me is how much crew got involved in this. It’s practically crazy.