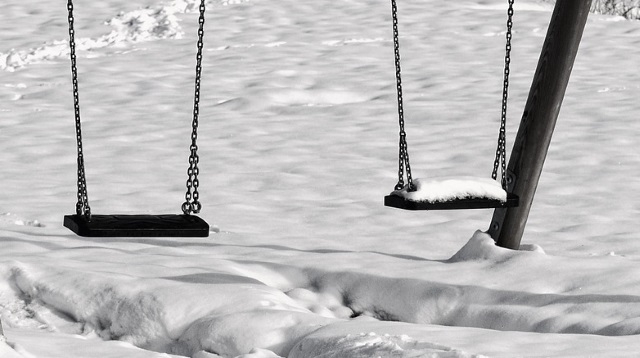 Two unlikely people sharing one bond between them.

The funny thing is this film reminds me of pretty much almost every single conversation I’ve had with just about anybody. It begins when a man named Patrick comes stumbling through a snowy forest area coming straight into a park where a little girl named Michelle sits by herself. Patrick sits next to her on a swing and tries to talk to her, but Michelle has no interest in a complete stranger who has no idea where he is. The reason Michelle is by herself and wanting to be alone is mainly due to her sister constantly pestering her.

Patrick can somewhat relate to this situation because he had a brother. Yes, had. The brother is no longer around. But Patrick remembers how his brother once told him that there was a woman in white who lived under a bridge. Better than a troll, I guess. As Patrick continues to retell the story his brother once told him, the bond between him and Michelle slowly grows.

For eight minutes in one location and barely much change in shots, this was a very deep and moving film. There wasn’t much to the story except that two individuals with a 20-year age difference are able to talk about a subject. The cinematography was pretty basic but the acting was professionally done. The ending was semi-predictable at the end, but it still made for an amazing ending complete with sounds and amazing shots. The location was a very scenic spot as well, considering it was out in the snow.

I have to give credit to Ross Moore for doing multiple jobs on this production. He really worked some serious effort into this short.