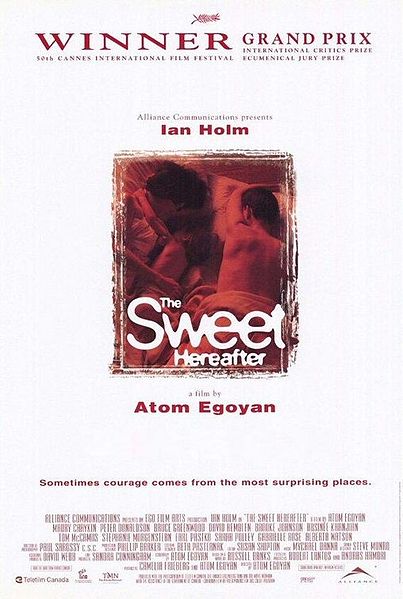 Achieving true emotional resonance in dramatic cinema is no easy task. Although many directors manage to manoeuvre its numerous pitfalls in its execution, few achieve what can be considered a perfect dramatic balance. After recently watching the 1997 film The Sweet Hereafter, I believe Atom Egoyan is amongst this minority of cinematic maestros.

The film’s plot revolves around a tragedy in a small rural town in British Columbia, where a school bus hits ice and crashes into a lake, taking the lives of fourteen children. Following the incident, lawyer Mitchell Stephens (Ian Holm) arrives in the town, compelled to represent the parents who lost their children in the crash. Mitchell convinces a number of bereaved parents to file a class action law suit against the town and the bus company for negligence.

The film’s narrative plays out in broken chronology, following events before and after the crash, as well as a subplot two years later, involving Mitchell meeting an old friend of his drug-addicted daughter. However, this is not just some needless ploy, as Egoyan juggles these three different timelines with clarity and purpose, using its structure to resonantly deliver the film’s themes and emotional drama.

When considering the heart of Egoyan’s film, then, I think the late Roger Ebert puts it best when he says it “is not about the tragedy of dying, but about the grief of surviving.” It is reflective of its bitterly contradictory title, and none embody this more than Billy Ansel (Bruce Greenwood), a widower who lost his young twins in the crash, and Nicole Burnell (Sarah Polley), a teenage survivor of the crash who is left paralyzed below the waist.

Prior to the crash, Billy is presented as a kind and loving father, while Nicole is young and vibrant, possessing a voice as soft and warm as her personality. After the crash, Billy is understandably embittered, taking out his pain and anguish on those around him. Nicole, then, is as emotionally broken as she is physically, her vibrancy lost to survivor’s guilt and a growing bitterness toward her sexually abusive father.

Meanwhile, Mitchell’s subplot two years later adds credence to his own ongoing suffering, showing that a person can also mourn the loss of a loved one who is not dead.

Atom Egoyan’s The Sweet Hereafter is a masterfully complex work on living with loss, and also one of the finest Canadian films I have ever seen. With Egoyan’s deft screenplay and precise direction, the viewer is left to engage with this film as an emotional being, as a character’s true personality can be masked by the emotional turmoil they are suffering. Additionally, the film’s conclusion offers  no note of optimism to the grief the characters suffer. This is a tragedy that will mark their lives forever, and their community for generations.