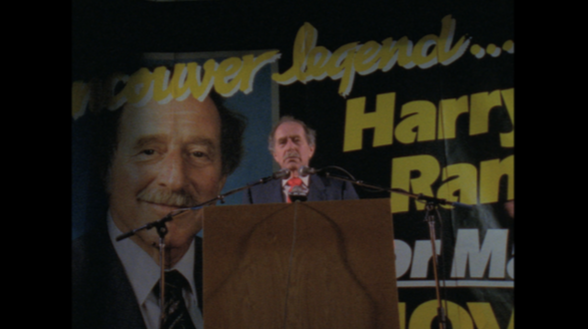 Politics in Vancouver, are never heavily discussed, because, the neighbours down below (and sometimes at the right of the country) have somewhat more interesting stories, while Canadian leaders, seem to lack confidence and a proper brain. I mean look at our current PM. How many blunders has he made? I guess we’ll never find out because he wins the majority’s vote by promising stuff like legalizing pot, probably to make people too high to focus, and probably because he does drugs in his office, therefore not realizing what he’s doing wrong. But enough about that, Let’s talk about former Vancouver Premier, Harry Rankin. Rankin was a persistent man who worked hard in making social justice and providing civil rights for his city. He was well respected by people in Vancouver for his views on politics. Many years ago, his campaign was made into a documentary by a lawyer named Peter Smilsky, but that footage stayed in Rankin’s son’s basement and didn’t see the light of day until most recently when Teresa Alfeld took over and finished the documentary, or what was of it, in a rather interesting mix of formats, of film reels and digitalization.

But it’s not just Rankin’s campaign that’s discussed, but also his life before it, when he served in the army while being rather rebellious against his own sergeant general as well as his time in law school and his determination in climbing to city council. During his political climb, he was also shown to really voice his debates in councils and on TV shows, making him strong as a champion yet rough as a bully at the same time. Despite his constant failures to run as Mayor, he stays determined no matter what but can’t fully make it when he loses to Gordon Campbell and things supposedly spiral downhill but Harry tries to be optimistic and keep his strength up. The keyword is ‘tries’.

The documentary really covers a lot of the inner details of Rankin and his views. It even shows in a place that’s simply described as a price-gouging condoplex and drug dispensary had a shed of politics that could be proven interesting. The footage swaps in resolution size as we see classic footage from primitive cameras, mixed with interviews from today where people talk about Rankin and how he impacted their life. Seeing the melding of classic and modern filming really gives you a view on how things differ way back then. Not just in resolution and technology formats, but also in location appearances. Never thought I’d see what E Hastings would look like without low-lifes. However the sound was a bit up and down making it hard to hear at times, but still, the point comes across well. Even looking at this documentary, it makes me think maybe I am a little bit like Harry Rankin, given my way of debates and bringing up what causes negativity (and more or less how to avoid it). A great way to teach people about some great Vancouver history and politics is of course, this doc. Because even though Rankin had a rebellious attitude and didn’t make it to his goal, he still was one of the most dedicated and well known friends of the community.

If only he had his chance. If only…