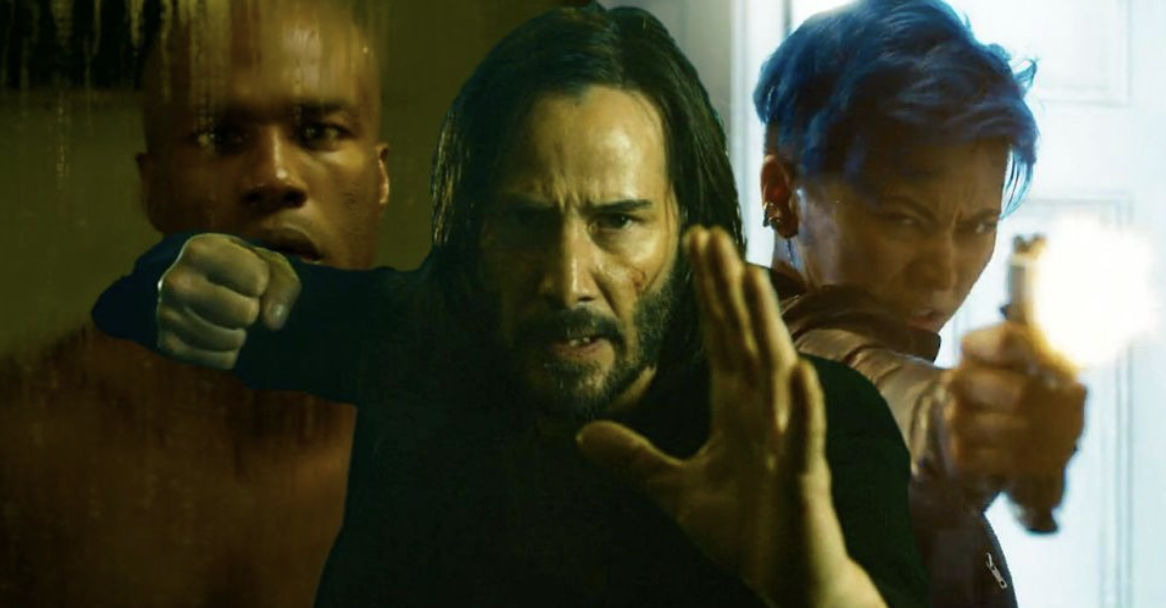 “That’s the thing about stories…they never really end do they?” quips Jonathan Groff to Keanu Reeves as they mull over the meta meanings of the latest Matrix entry, Resurrections. The Lana half of the Wachowski sisters makes it clear to the audience in the first act that there is more than a little corporate pressure willing this entry into existence as Warner Brothers is literally name-dropped in the aforementioned scene. A further meta-munching montage on the nature of modern entertainment and The Matrix’s place in it follows before the story can truly begin.

And that story is quite the familiar one. Years after sacrificing themselves to strike a blow for humanity against the oppressive machines, Neo (Reeves) and Trinity (Carrie-Anne Moss) find themselves trapped in the titular Matrix, an artificial dream state designed to keep humans asleep so that their energy may be harvested to power the machine empire. Neo is a successful game designer who, despite his success, remains unfulfilled and pines after Trinity, named “Tiffany” here complete with a literal “Chad” husband and two kids. He also can’t help but wonder if his video game creation, a trilogy also called “The Matrix”, is more fact than fiction.

Neo’s therapist (Neil Patrick Harris) repeatedly tries to ground him in this reality, but a new generation of real-world warriors led by Bugs (Jessica Henwick) is just as determined to shatter that illusion. One red pill and a leap through the looking glass later, Neo is awakened from the Matrix once again and is thrust into a dystopian future similar to the one he left years ago, only now with some machines having defected to the human side and a better menu (try the strawberries!).

He learns that his therapist is in fact a menacing program called the analyst who has not only designed this latest Matrix, but has kept it powered through the torturous, unrequited love between Neo and Trinity. He wants Neo plugged back in while Neo wants Trinity unplugged. But the old “bullet time” tricks won’t be enough for Neo to succeed this time and he may even require some help from a previously antagonistic source.

It’s a long standing cliche that Hollywood can’t leave well enough alone with popular IPs. Indiana Jones rode off into the sunset but was recalled to fight the Soviets, Ripley sacrificed herself to stop the Xenomorphs, but was literally resurrected several years later and nearly two decades after the book closed on The Matrix trilogy, Neo and Trinity are resurrected, but for what?

There’s little new ground for this franchise to break, a contention the movie itself seems to understand as it xeroxes many of the original’s story beats, sometimes shot for shot. Despite this in-universe imitation, the flattery doesn’t seem that sincere or even competent, especially given the constant flashbacks to the first movie, reminding us of a more stylish and groundbreaking piece of cinema we could be watching instead.

It may have been enough simply to give us another thrill ride to pass the time, but even the film’s action seems tired. The absence of the 1999 original’s action designer Yuen Woo Ping is keenly felt with sketchy cinematography and apparent body doubles watering down the fight scenes. This is doubly disappointing seeing as we know what Keanu is capable of these days thanks to the John Wick series.

While it’s obvious by now that the film pales in comparison to what came before, I’d be remiss if I didn’t highlight the new additions that elevate it from being entirely pointless. Neil Patrick Harris proves conclusively that he can move past his “Barney Stinson” character and portray an effective villain. Making a Matrix antagonist a therapist, precisely the type of person who is supposed to keep us grounded is a brilliant move, not to mention the film’s unexpected subversion of “bullet time”. It’s strokes like these that could have rendered a richer picture had the film been less mired in a meta rerun.

Serving dual roles as sequel and reboot, this latest Matrix entry tends to regurgitate more than it resurrects. It’s a common problem in franchises straddling between reaching new fans and maintaining old ones, but properties like Spider-Man and Star Trek have managed it before. Like the film itself notes, the choice between red and blue pill is an illusion. Perhaps the right answer is a different colour entirely.

The Matrix: Resurrections is now screening at theatres everywhere