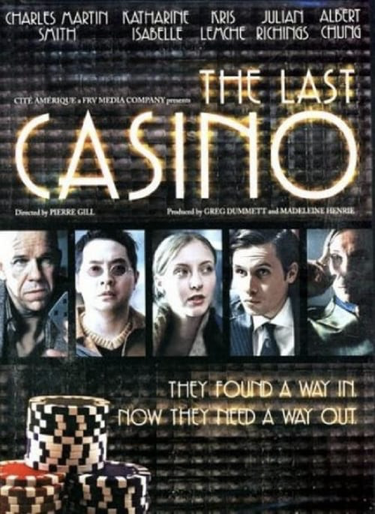 Produced by Greg Dummet, Lorraine Richard and Madeleine Henri, The Last Casino is a Canadian film released in 2004. Directed by Pierre Gill and written by Steven Westren, the Last Casino has a cast comprised of Katherine Isabelle, Kris Lemche, Julian Richings, Alberta Chung and Charles Martin Smith. We also see the Last Casino characters of Barnes, Elyse, Scott, Orr and George. The film is also available in French and it is tilted La Mise Finale.

The story follows a group of MIT Blackjack Team who were a group of students from the Massachusetts Institute of Technology. They were all trained by Bill Kaplan who delayed his admission into Harvard University because he believed that he could create a mathematical model that would make him successful at the rules of blackjack. Within a nine-month period in 1977, Bill Kaplan turned $1000 into $35,000.

The film follows Professor Doug Barnes, a professor of Mathematics, who plays a game of blackjack at a casino. He plays the game using a tactic called card counting which makes sure the odds of the game are in his favour. He is noticed by the casino manager who takes a picture of his face and further bans him from entering or playing games in the casino. Barnes then meets with Orr to discuss how he can get Orr’s money back from the casino after he is effectively banned. Barnes comes up with the idea of getting a team of students from his university who would be great at card counting and not be discovered.

The team Barnes puts together consist of Elyse, a waitress who has the capacity to remember the most complex things said, Scott who he recruits after he passed a complex memorization test and George who has memorized pi 70 units past the decimal. This is the team Barnes brings to Orr after convincing them that his plan of counting cards who work. He further teaches the group how to count cards and tells them the plan has little or no risk. Orr agrees to Barnes’ plan and decides he would be entitled to 75% of Barnes’ share of 50% since they would be partners.

Before heading to the first casino, Barnes gives his team of card counters false identities to help keep them safe from being found out. At the casino they choose to play at, George becomes overwhelmed by how the game is played and Elyse has to step in to keep his head above water. The winnings made that night by the team is $6000. They kind of go haywire by spending the cash on luxury items. Elyse is later approached by a man at the casino on one of the nights they are there, and he says he chases gamblers and has spotted one in the casino, the gambler spotted is Scott and he says he knows Scott is counting cards.

A series of unfortunate events meets the team struggling to make some money while Orr tells them the deal is off and his investment on $100,000 needs to be paid back immediately. He gives a week to Barnes to get the money or face the consequences. Barnes tells his team they owe $500,000 and they need to make it so as to pay off Barnes. The team then plans on how to play atca.

After been discovered in the Quebec area where the casino questions Scott and George after getting them into a room, the team then moves to the Ottawa region with hopes that they would not be recognised. One night in Ottawa sees Scott lose $20,000 and George step in to try and help him and the team make the money back. George is discovered and a fight erupts with casino management because he simply refuses to give up the money he has made.

With Orr’s deadline looming, the team buy their way into a secret game with very high stakes. Unfortunately, card counting does not work in this game. They place pretty large bets which they lose at the beginning of the game but make a comeback with a big win. Elyse decides to take the big win to the team while she informs the secret casino management that the cards in the deck are short four and she demands they be counted. They decide to take their winnings, cut their losses and leave. Handing the money over to Barnes to give to Orr, did not seem like a good idea to them as they don’t trust that Barnes would actually hand it over to Orr. The team demands to meet Orr at the exchange, and it is at this point they discover that Barnes lied about the amount owed Orr, and the movie ends at this point.

There have been some great positive reviews about the film, most especially with the fact that it is produced and directed in Canada. The plot of the story is engaging, and a variety of viewers are bound to be pleased with the film. The ratings of the film earned some high points as viewers were really impressed with the film. Overall, the film is quite deep even if it is depicted as a bit of comedy. It depicts casinos in a whole new light which might just change your mind about gambling.