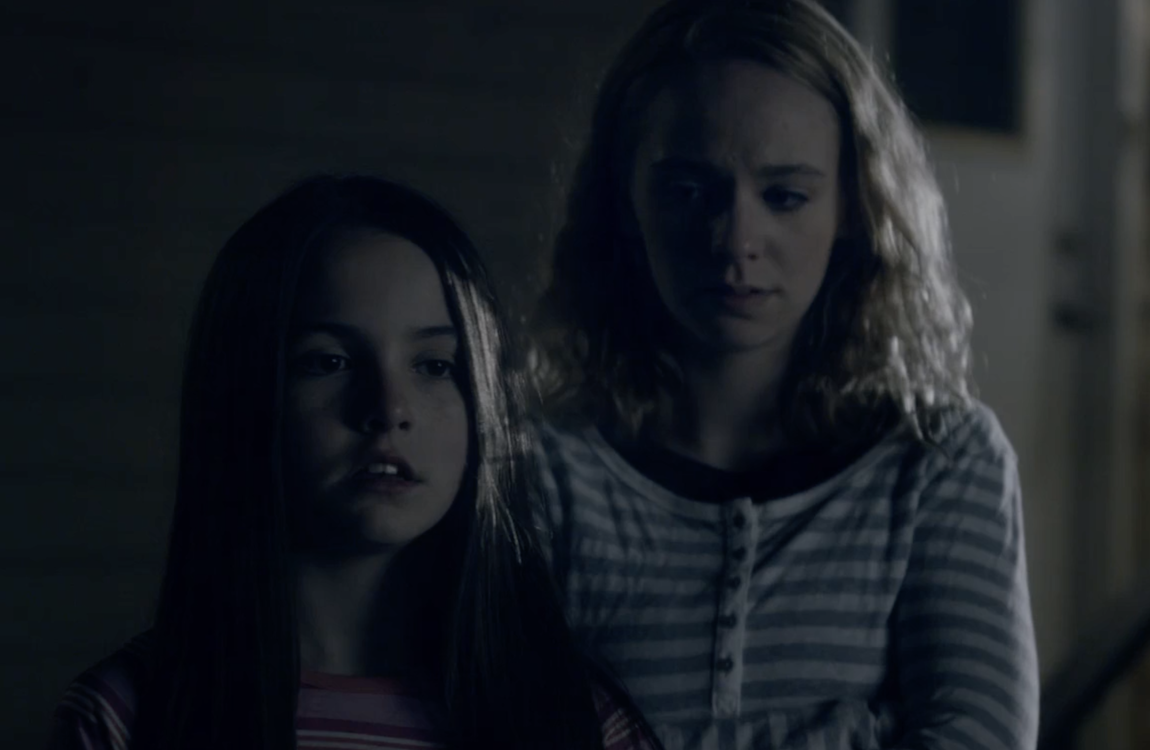 I’ve always enjoyed a good dose of horror from time to time. And one of the best I’ve seen so far is Jeremy Lutter’s film, The Hollow Child. Having covered some of his work before, I can personally say Jeremy’s films always find a way to impress and surprise me at the same time. Not only did this film do that, but it also had contained subject matter that has been my personal favourite for reasons that baffle even me: A horror film with a creepy ominous little girl. So how does it go?

A game of hide and seek goes frighteningly wrong when little Janie (Laiken Laverock) takes a wrong turn in the woods and goes missing, which only causes her big sister Allison (Mamie Laverock) to burn the family’s house down. Anyways, after 30 years passes, two teenage girls Sam (Jessica McLeod), and Emily (Genevieve Buechner) have plans to hang out without any regard of Sam’s little sister Olivia (Hannah Cheramy). But when Olivia wanders into the woods alone, she doesn’t come home and Sam has to go find her soon-to-be sister. I forgot to mention, Sam is not actually related by blood, she was adapted from a group home. Nobody is able to find her unfortunately.

Thankfully, unlike most real life scenarios, Olivia has returned safe and sound but something seems off about her. Olivia’s father Garrett (John Emmet Tracy) doesn’t trust Sam and Sam notices Olivia acting stranger than usual. Olivia’s mother Liz (Jana Mitsoula) has to spend the night working and Garrett is pretty busy too so that means both girls are indoors for the spooky night. So when the two girls spend the night together at Halloween, they play a little game of hide and seek and you guessed it, something goes wrong. Very wrong. The game gets taken outside, introducing Sam to the darker side of the woods. Also that week, a neighbour’s dog goes missing, and Sam tries her hardest to get through to the parents regarding Olivia’s strange behaviour but to no avail. Sam goes out at night constantly and keeps rediscovering the spirit of Janie as she wanders around the woods. Finally, to shed some light on the issue, Sam meets Allison as an adult (Johannah Newmarch) to help her figure out what’s going on, specifically the strange phenomenon in the woods. Along with her classmate Logan (Connor Stanhope), Sam ventures into the woods to finally solve the strangeness and find her actual sister.

Like I mentioned before, it’s one of the best, if not the best I’ve seen. The characters are very well portrayed, the lighting and effects are a good thrilling touch with a chilling feel, the story is well written by writer Ben Rollo, and the makeup/special effects around the end are especially cool. While this may seem like a concept that has been done before, and a good amount of people might be complaining that they’ve seen it many times, it’s nice to know that it’s still being used to this day and even finds a way to be slightly altered bringing up a new source of evil that not many have thought of. Certainly hope that Jeremy’s movie gets a lot of recognition.

The Hollow Child will be screening as part of the Vancouver Badass Film Festival (VBAFF) at the Rio Theatre on March 31st at 3:30 pm.