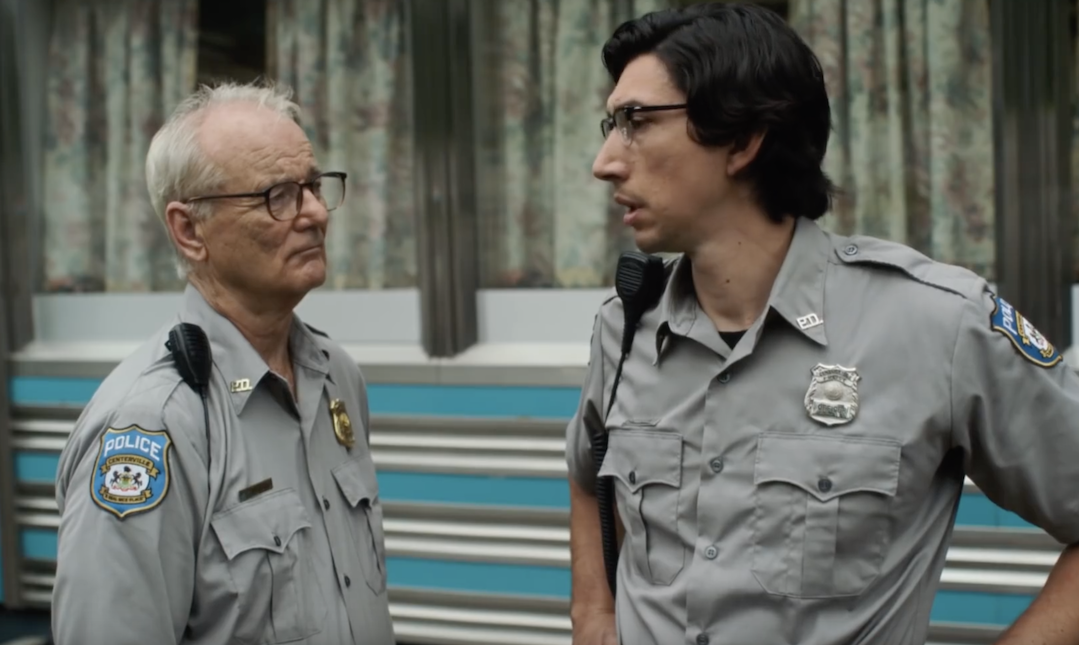 First of all, I know I’m a little late to the party. But better late than never. I guess. It’s not like this film is dead yet, and if it were, it won’t die, obviously. Because it’s a zombie film (lo-gic). Since my days of being a film student, zombie films have seemingly lost traction overtime. In my personal opinion, those kinds of movies have been done to the death. Now that THAT stupid and predictable joke is out of the way, let us get into what happens. It starts out with two cops, a long-term chief Cliff Robertson (Bill Murray) and his rookie Ronnie Peterson (Adam Driver) as they venture into a forest area to track out Bob, the local Hermit (Tom Waits) who has a habit of breaking laws including trespassing and murdering… animals, that is. There’s one free running lawbreaker in every town, 10-15 in Vancouver, I believe. After their cheesy discussion with this hairy guy, the two officers head back into their generic small town called Centerville (last time I checked, Centerville had either a problem with demonic entities or monsters). The big news all around town or whatever is of it, is that fracking is causing the Earth to tilt off its axis, thus resulting in animals of all species to return to the forest and zombies to spawn from their graves. When the violet moon (no, not THIS violet moon) signals in the sky, along come two zombies (Iggy Pop and Sara Driver) with a thing for coffee. They go to the only coffee shop in town and attack both employees while guzzling the elixir of life. I don’t know how fracking causes those things to happen, but it’s some of those mysteries of science and/or really messed up writing. Not only that, but 3 good friends who are on a vacation come to crash at the local hotel. Zack (Luka Sabbat), Jack (Austin Butler), and Zoe (Selena Gomez) cause some of the zombies to increase in numbers because they left their hotel door open one particular night. From there on, it’s only more chaos for the town and the neighbouring towns we don’t hear much of and maybe even the world. Local residents are slowly decreasing in numbers and returning as the living dead. 3 random kids manage to escape (Maya Delmont, Taliyah Whitaker, and Jahi Winston) but there’s still a zombie invasion to deal with. So it’s up to the two bespectacled officers with their only other associate Mindy Morrison (Chloe Sevigny) to take matters into their own hands with the help of a Scottish coroner named Zelda Winston (Tilda Swinton) who has a lot more fighting abilities than anyone could imagine. Together they fight as hard as they can to the end. I’m not saying what happens, because you’ve probably predicted it. Or maybe I’ve made you want to go see it.

In all honesty, I thought it was an overdone concept. Everyone got a good laugh out of this film at the theatre I attended, but me, I thought the jokes throughout the whole thing were kind of lame. Some of the characters ranged from a variety of personalities. Like the racist farmer Frank Miller (Steve Buscemi) to the quaint geeky shop owner Bobby Wiggins (Caleb Landry Jones) who also get a fair amount of screen time. A lot of the characters though are overdone personalities if you ask me, but as for actors, quite an interesting range. Never thought I’d see the day Bill Murray and Selena Gomez would appear in the same scene together. The soundtrack was something most people thought was funny, and even a couple characters broke the 4th wall with the mention of this country western song that sounded either like Luke Bryan or the Cham-peons (sorry, I’m not familiar with country music). But personally, I felt the song sounded too unoriginal. That, and there seemed to be a lot of silly and groan worthy plot points, and maybe 1 or 2 surprises. I don’t know, a good amount of people enjoyed this, but I can’t say it was my shot of whiskey. If you still enjoy zombie films, I suggest you go watch it. Or if you ever wanted to see a film with the most disorganized mismatched uneven list of actors to ever show in a film, this is a good example of one.

Not exactly bad, but not so good either.