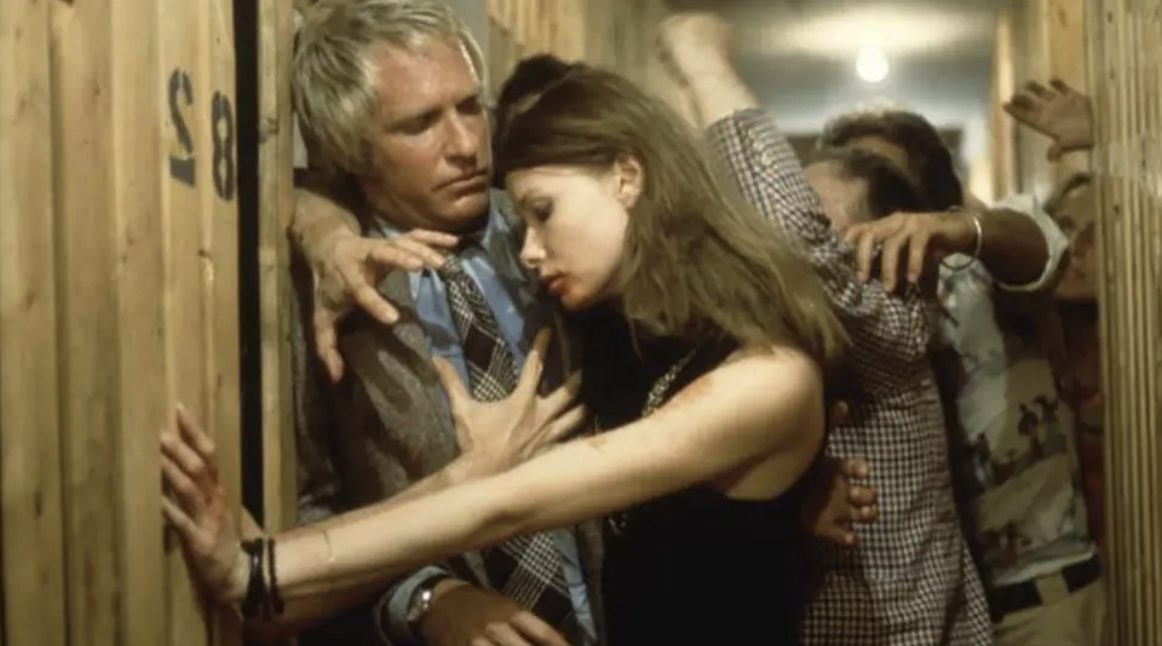 Last week, I wrote at length about Canadian cinema’s “Tax Shelter Era” which ran from 1974-1982 and encompassed those movies in which investors could claim 100% of their investment in a film for tax purposes. Literally hundreds of movies were produced (although not necessarily released) during this period, but few continue to be as notorious as David Cronenberg’s Shivers, the 1975 shocker that defined the Canadian auteur’s “body horror” sub-genre.

Among the first to notice this phenomenon is the Starliner’s resident physician Dr. Roger St. Luc (Paul Hampton) who along with Nurse Forsythe (genre mainstay Lynn Lowry) begins to come across multiple residents who have either just been bitten by the parasites, or have already succumbed to its worst effects and devolved into sex-crazed lunatics. It’s gonna be a long and bloody night…

After cutting his teeth on experimental pieces (Stereo, Crimes of the Future), Cronenberg burst into the grindhouse and drive-in scenes with a picture that thrilled audiences just as much as it upset the Canadian political establishment over the use of tax dollars in such a gory and violent film (“You should know how bad this film is.” Robert Fulford infamously wrote in the pages of Saturday Night magazine. “After all, you paid for it”). My girlfriend would certainly agree with the latter assessment as she checked out about ⅔ of the way through the review screening.

This was my third viewing and I’m pleased to say that the film holds up as a solid slice of horror entertainment and not super-subtle commentary on urban alienation and panic. The characters have removed themselves from mainstream society to a mostly-self sustaining apartment complex which includes stores, recreational and medical facilities, all the better to escape urban decay and crime (an old theme that may prove new again for a contemporary Canadian audience). But their salvation becomes their tomb when they find themselves trapped in a virtual petri dish at the hands of a now-deceased madman.

While admittedly dated in the more technical aspects, the film still delivers with well-staged practical gore FX and carefully paced suspense. The beginnings of a horror auteur on the rise are fully on display here. Lynn Lowry provides the eye candy and supporting player Joe Silver furnishes some expository punch as Roger’s wisecracking colleague Rollo.

Nearing its 50 year anniversary, Shivers manages to shine as a jewel in the Canadian horror crown and a rare example of a financially successful Canadian film capable of pleasing general audiences if not the Laurentian elite. A perfect way to start your Cronenberg marathon.