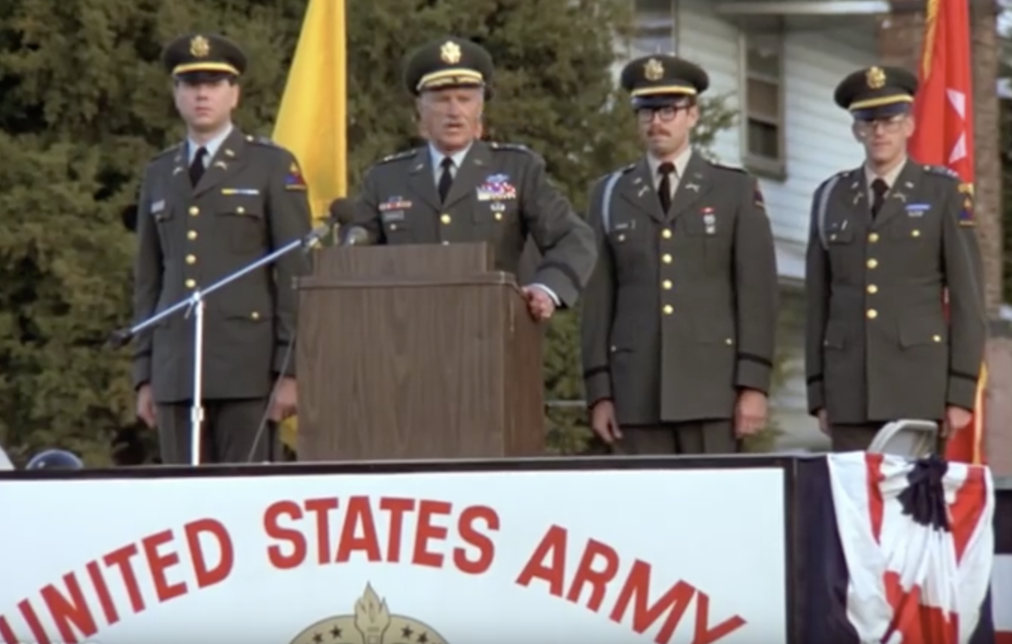 The significant contributions made to comedy by the likes of Bill Murray, Harold Ramis, and frequent collaborator Ivan Reitman cannot be understated. The trio are best known (along with Dan Aykroyd) for the timeless smash hit Ghostbusters, which is rightfully revered as a pivotal moment in 1980s comedy, and indeed comedy as a whole. Their respective careers did begin to disperse in varying directions following its success, but their prior collaborations deserve attention also, namely 1981’s Stripes. While it is an undoubtedly inconsistent affair, feeling more like stepping stone to what came next for this holy trinity of funnymen, there is still a lingering essence of the comedy magic that comes with their collaborations, helped along by an impressive cast of stars-to-be.

The opening act is without question Stripes’ most accomplished, beat-for-beat striking all the right chords between character development and comedy. Enter John Winger: a down-on-his-luck slouch, who is an early embodiment of the sardonic wise-cracker that is synonymous today with Bill Murray’s deadpan acting style. After quitting his job, having his car repossessed, and losing both his apartment and his girlfriend (all in the same day), John decides to join the army, convincing best friend Russell (Ramis) to come along with him, consequently getting far more than they had bargained for.

The opening act surprised me, as it is handled in a meditated manner I did not expect, taking time to fully flesh out John, and to a lesser extent Russell, while never neglecting the potential for snappy laughs from its talented leads.

As much is clear when, following the stressful events of the day, and a few more doses of humourously bad luck, John proclaims to Russell “I need some heavy discipline in my life.” This is a climactic point in their back-and-forth that was not rushed, but rather reasoned with before arriving at the conclusion. Such writing is refreshing for a comedy of this sort from Ramis and his co-writers Len Blum and Daniel Goldberg, while Reitman’s direction impressively grounds its borderline slapstick nature.

Upon beginning their training, we are introduced to the expanded cast of talented actors, which includes John Candy’s, Judge Reinhold, John Larroquette, and most notably, veteran actor Warren Oates as the platoon’s drill instructor Sgt. Hulka. While Bill Murray’s natural show-stealing ability is still on full display here, Oates’ Hulka was a standout character for me due to the nuance of his portrayal.

Although he is usually at odds with John’s clownish behaviour, Hulka is not a typically antagonistic character, instead acting as the sobering voice who ‘calls him out on his shit,’ while Oates’ performance shows inflections of humanity through well-placed smiles and a humble tenacity. I was relieved to find that neither Oates nor the writers opted for a more typically clichéd drill instructor, instead embracing the necessary elements of cliché, before blending them with a dynamic suite of actions and mannerisms to create dimension.

I only wish the female characters were as fully realised as Sgt. Hulka. Even by the standards of the 1980’s, the female characters are relegated, for the most part, to dated passive roles that poise them either as objects of the male gaze, or catalysts for the heroic actions of its male characters, with little context granted beyond that. Heck, there is even a tasteless rape reference inserted for good measure.

While on the issue character development, another problem I have with Stripes is that in spite of the strong opening and the clever ways in which it establishes the characters to us, it does not always follow through with these engrossing developments. For example, John explains to a rude passenger in his taxi that he is actually a photographer, before grabbing his camera and taking her picture in the back seat, intentionally frightening her for his own comical amusement. But later in his apartment, an undeniably virtuosic portrait of his then-girlfriend can be seen, tying in with what he had earlier said to the passenger. Clearly this is an interest of the character, and something at which he is at least competent, yet it is never again addressed in the film, not even in the extended cut, which is the version I watched.

Late-film issues are not just confined to discarded character traits, however. The entire third act feels out of place with all that had come before it, as it quickly descends into bombastic insanity, which contrasts poorly with the more measured and grounded approach that paired well with its comedy in the opening act. This results in a disjointed final act that feels less like the closing to what was, up until that point, a largely admirable comedy, and more like the misguided sequel that tries to double down for the sake of variety.

To its credit, the film does manage to briefly conclude in a manner befitting of its brand of comedy, even if it does little to override the flaws of its final act. But when Stripes strikes the right chords, there is that undeniable sense of comic ingenuity that is typical of a film combining the talents of Murray, Ramis, and Reitman. Stripes is an uneven comedy that slowly comes undone the further it marches, but if the lessons learned here helped create a masterpiece like Ghostbusters, it can be difficult to begrudge its shortcomings…glaring sexism aside, of course.