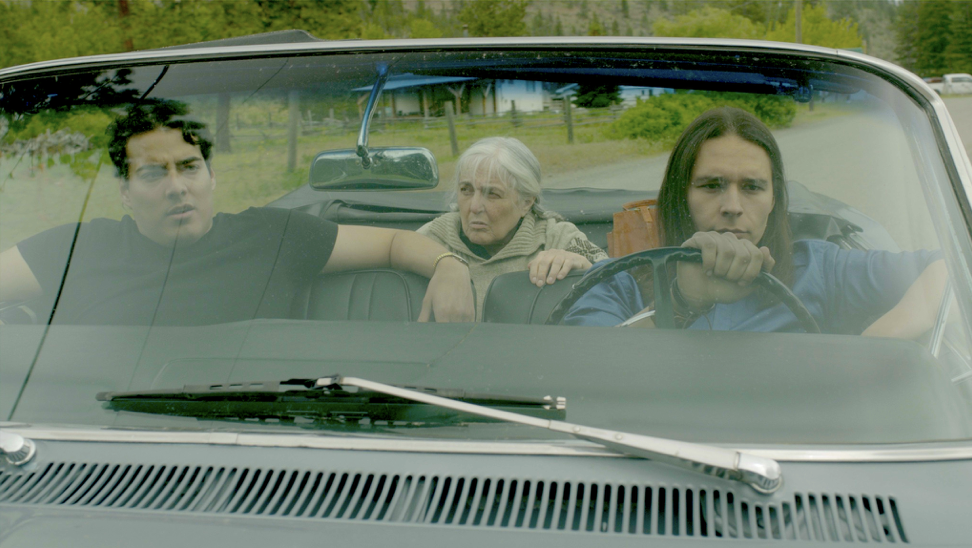 I’ve written extensively on what I consider to be an “Indigenous New Wave” sweeping Canadian cinema these past few years. Often featuring new and emerging voices, these pictures are a key part of reconciliation between our country and Indigenous peoples. Some deal with healing of generational trauma at a community level (The Grizzlies) or individual healing via spiritual fulfillment (Monkey Beach). Despite the title, Allan Hopkins’ feature debut Indian Road Trip never leaves Syilx territory, regardless of the protagonist’s attempts.

Cousins Hank (Ajuawak Kapashesit) and Cody (Paul C. Grenier) have grown weary enough of conning gullible tourists and dodging the local law to pack up the convertible and drive south to turn some heads at the infamous Wreck (nude) beach. But before they can put so much as an acre of road behind them, they are roped by local sheriff Billy (Nathaniel Arcand) into doing one last favour before leaving town: driving the cantankerous elder Hetta Yellow Fly (Dale Hunter) to the old abandoned reservation to settle some unfinished business with her sister Bertha.

What they expect to be a short detour morphs into a comical and spiritual journey featuring ghosts, out bridges, odd jobs and a cache of stolen money pursued by a suspicious pair (Ross Munro and Rob McEachern) whose true identities and motives are too wild to spoil here. It’s far from a straight road, but one that will teach these two cousins a thing or two about where they come from and why their heritage shouldn’t be taken for granted.

“When you have confidence in yourself, you’re always in the right place at the right time.”

Watching Indian Road Trip, it occurred to me that so many of the Indigenous depictions on screen tend to be through an outside lens looking in, whether it’s Hollywood or other independent filmmakers. This new wave has slowly been changing that, but it still feels novel to have a story from the inside looking out. The only non-Indigenous faces are seen in fleeting moments of Hank and Cody’s cons in action, one featuring a friend of mine (shout-out to Hayley, wherever you are) that hilariously runs off the rails (no spoilers).

Captured over a picture-perfect lazy summertime, Indian Road Trip is an inviting affair.  Kapashesit and Grenier have ample chemistry to spare while Hunter foils them with reckless abandon. The story is paced and scored with a chill yet involving rhythm it never departs from. Finally, the frame is enhanced with subtle special effects and effective production design. I enjoyed the whole thing so much, I was even able to overlook minor technical foibles like camera jitter, inconsistent colour grading and frame blanking (as a film editor, I notice these things).

I often wax philosophical about the need for Canadian-funded film and TV to feature Canadian stories as the world is over-stuffed with Hollywood clones (even in Hollywood itself). Considering the cultural backlog, I’d say that call goes double for Indigenous content, especially when it’s this entertaining. Your move, Telefilm.