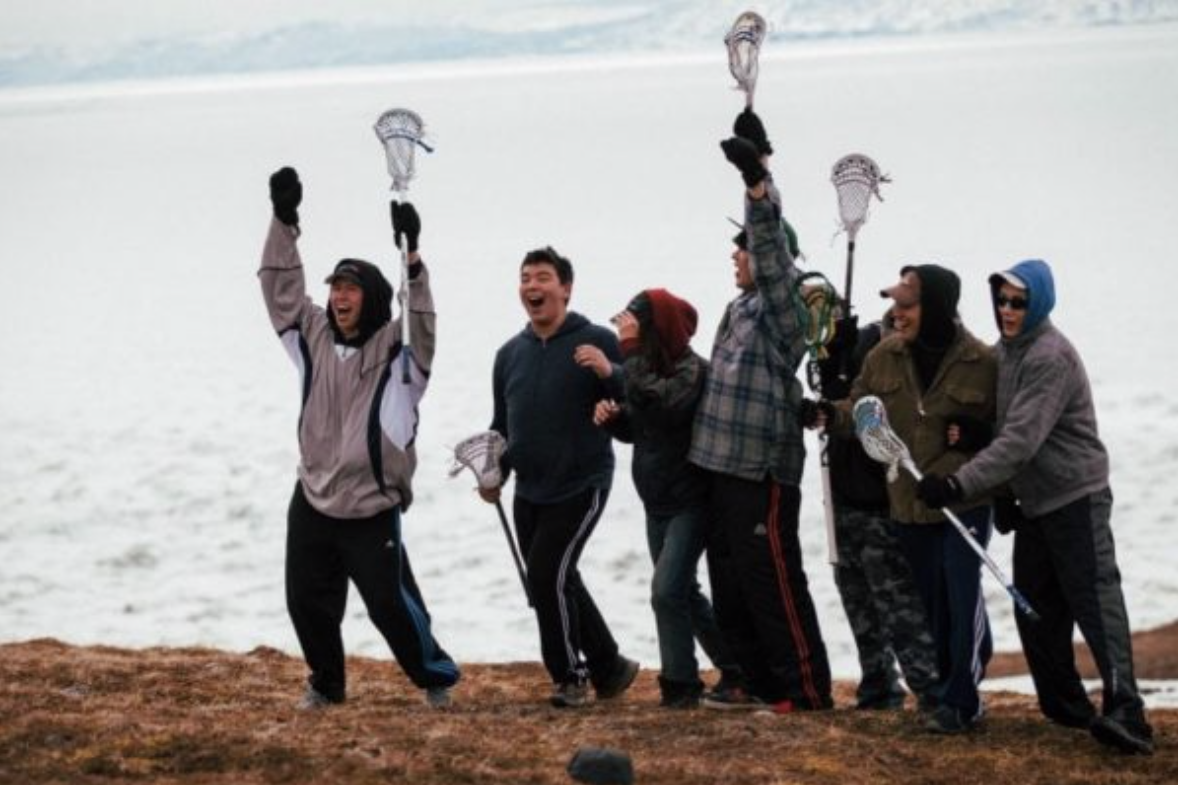 During my time as a film critic, I’ve often lamented on the lack of genuinely Canadian stories that actually make it to the screen. Hundreds of films and episodes of television are produced in this country every year, but precious few are actually set here or feature Canadian characters. This dearth has been even more apparent with Canada’s Indigenous peoples whose screen stories don’t often venture much further than the APTN channel. I’ve begun to notice a change in the latter however as in an apparent push for reconciliation, Telefilm Canada has recently thrown their weight behind Indigenous stories including Through Black Spruce, the Haida-language Edge of the Knife, and Falls Around Her (reviewed HERE). But it is the unlikely true story of a Nunavut Lacrosse team that has the biggest shot at connecting with audiences, not only at home, but worldwide. Ladies and Gentlemen, I present to you: The Grizzlies.

Fresh-faced Grad student Russ Sheppard (Ben Schnetzer) has accepted a one year post teaching high school in the remote northern community of Kugluktuk in order to pay off his student debt. Initially guided through the culture shock of scare infrastructure and high food prices by fellow teacher Mike (Will Sasso), Russ encounters a classroom with low work ethic, abysmal attendance, and seemingly no desire for an education period. This is not a moral failing as most of the community has grown up surrounded by poverty, addiction and has been dealing with regular teen suicide as a result.

Heartbroken at this state of affairs and determined to turn things around, Russ decides to start a school lacrosse team, convincing the hard-nosed principal Janace (Tantoo Cardinal) to let him use the school’s paltry budget on used equipment. While initially failing to garner interest from his jaded students, Russ learns from his lone model student Miranda (Emerald MacDonald) how to communicate his intentions and is soon able to assemble a ragtag group of players led by stoic hunter Adam (Ricky Marty-Pahtaykan) and class troublemaker Zach (Paul Nutarariaq).

Finally given an outlet for their angst and frustrations, the group quickly warms to the game under Russ’ instruction and are split into a small league of three teams (since there’s no one else nearby to play). Wanting to aim high, Russ enters the kids into a National Lacrosse Championship in Toronto, not realizing the immense cost of flying everyone down from the north. With help from Miranda, Mike and the kids, the team endeavours to raise the funds through sponsors and growing community support as the town slowly begins to rally around the kids during their weekly games. But when several tragedies strike at once, challenging even Russ’ resolve, the team must find the strength within themselves to not only make it to the tournament, but also claim a victory for themselves as a people.

The Grizzlies has been marketed as a sports drama and that’s certainly true on the surface. Look beneath however, and you’ll be treated to an inspirational drama about a town and people who find purpose and meaning not only through the sport of lacrosse, but on their own terms as well. Russ gets the ball flying by starting the team and coaching them, but the it’s kids themselves who ultimately take it over the finish line. The story can be an emotional roller-coaster with moments of high-spirited levity counter balanced by painful tragedy, but it’s all rendered tastefully and never once does a moment ring false. It truly is a story of reconciliation between Canada and Indigenous peoples on a human scale.

Veteran producer Miranda De Pencier has crafted a remarkable directorial feature debut here in no small part to her commitment to shooting on location in Nunavut (Iqaluit effectively doubles for Kugluktuk here) but also for featuring a predominantly local cast. The kids here are almost exclusively novice actors and are absolutely terrific. Each character from the outspoken Zach to the young wide-eyed Tanner (Brad Fraser) to the troubled Kyle (Booboo Stewart) is distinctly drawn and unforgettable. You feel with them every step of the way, triumph or heartbreak. While industry veterans Sasso and Schnetzer do fine here, it’s the kids who will stick with you after leaving the theatre.

The technical merits are to be praised as well with stunning cinematography perfectly capturing the Arctic tundra and a spirited soundtrack featuring the award-winning throat singing of Tanya Tagaq. The story is well paced with nary a wasted moment. Everything you see serves the characters and the story they tell.

I don’t often award a perfect score to films I review, but I have no hesitation in bestowing one on The Grizzlies. Not only for producing a film under near impossible conditions, but for giving the world a beautifully-rendered story that shows just what Canadian filmmaking is capable of if we would only stop trying to be so American.

The Grizzlies is currently screening in theatres across Canada.