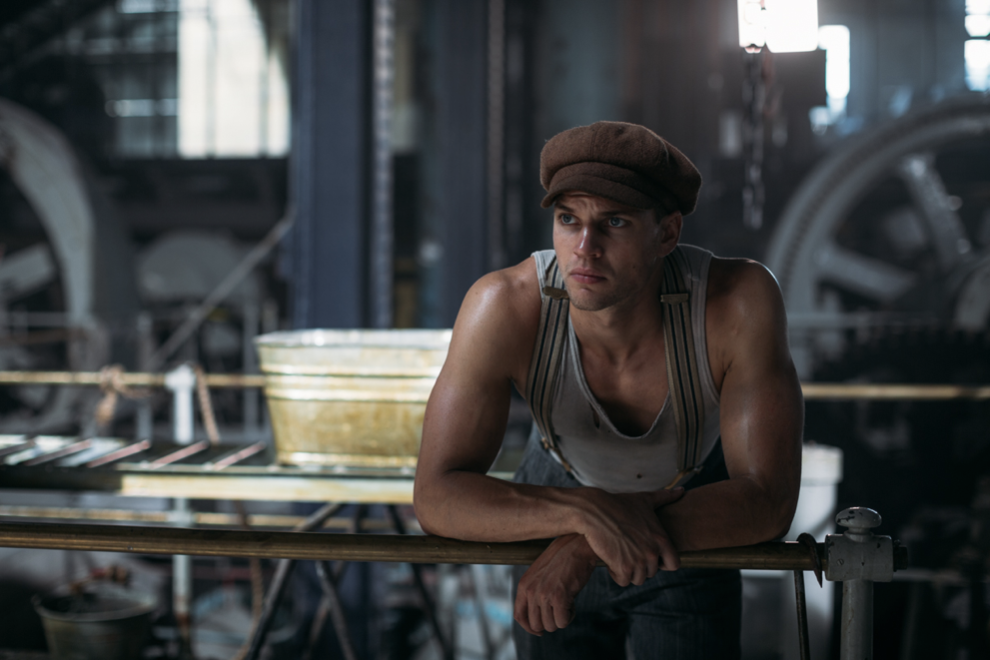 You’re more likely to find a sales associate at Canadian Tire than you are to encounter a musical among the many genres on offer in Canadian Cinema. After the sorry attempt that was Score: A Hockey Musical in 2010 (the film that scared TIFF off from opening the fest with a Canadian film again until just this year), there would be occasional dabbles in the genre like 2014’s possible(?) cult favourite Bang Bang Baby and this year’s timely re-telling of the the 1919 Winnipeg General Strike, Stand!

Based upon the 2005 stage musical Strike!, the film sees Ukraine immigrants Stefan Sokolowski (Marshall Williams) and his father Mike (Gregg Henry) scrape together what they can at various jobs in post-WWI Winnipeg in order to raise enough to reunite them with the remaining family members. Not an easy task when the price of everything, including CPR cross-country passage keeps going up. Despite the reservations of his father, Stefan follows the pretty Jewish girl next door. Rebecca Almazoff (Laura Slade Wiggins) to a meeting of disgruntled workers who plan for a general strike. All of the city’s labourers, union or otherwise, are resolved to march off the job to demand better wages and treatment.

Meanwhile on the wealthy side of town, well-connected lawyer A.J Andrews (Paul Essiembre) is none too happy about the growing unrest. He seems hell-bent on stopping the strike before it starts, largely chalking it up to the recent waves of immigrants he feels are bringing in revolutionary ideas from Europe with them. The irony of his bigoted stance is not lost on his longtime black maid Emma (Lisa Bell).

The battle lines are clearly drawn as the workers suddenly walk off the job and the city’s economy grinds to a virtual halt. Despite being prevented from joining by his father at the start (and derided as “scabs” by the strikers), Stefan soon decides that joining the fight is the only way to secure a better future for himself and his family. Mike has other ideas and may be willing to sell out the strikers in order to achieve the same goal.

As the strikers continue to fight for their rights, Andrews fights back just as hard utilizing money, the press and even jobless WWI veterans as his own special police to help break the strike as a major march of thousands is planned which will ultimately decide the fate of the movement. Anyone familiar with how the strike ended knows there is no fairytale ending here. The strike is remembered largely for the labour movements it helped spawn and the democratic change it produced (several of the strike leaders were elected to local office despite being in prison).

With 2019 being filled with economic and political movements everywhere you turn, the century-old story told in Stand! feels oddly timely despite dated trappings. There is an earnest effort here to portray a David vs. Goliath battle not only on class lines, but religious, gender, and racial ones as well.

It’s certainly easy to sympathize with the film’s intentions, but Stand! ultimately fails to truly rise to its promise as what may have worked onstage doesn’t translate well onscreen. There’s a community theatre feel to the whole thing that even the beloved CBC Heritage Minute wouldn’t tolerate.

The story is sound enough, but fails to make adequate use of its characters, several of whom including Emma, AJ’s wife Susan (Robin Ruel) and a pair WWI veterans played by Ryan Ash and Gabriel Daniels are introduced and promptly dropped for the majority of the narrative, only to resurface fleetingly in the final act. Any sense of nuance seems to have been ejected as the films antagonists are borderline cartoon characters who would be more at home in Dr. Evil’s clubhouse. There is plenty of context to the conditions leading to the strike that remain unexplored or dismissed including a recessed post-war marketplace and extremely radical politics of labour leaders of the time (many sympathized with Lenin’s Bolsheviks who ironically drove our main characters to Canada in the first place!).

Director Robert Adetuyi whose previous credits sequels to dance flicks You Got Served and Bring It On, doesn’t bring much kineticism to the proceedings as characters play sparsley against Winnipeg’s period locations like ants in what should be an epic re-telling. Scenes and sequences that should be big moments both thematically and visually ultimately feel constrained, likely by budget, but also by a lack of creativity on the filmmaker’s part.

The songs themselves are works of modern pop juxtaposed on a period setting (á la Greatest Showman) which would be all well and good if not for the cheaply rendered electronic keyboard soundtrack. Matters aren’t helped by characters (particularly Stefan and Rebecca) completely abandoning their accents when it comes time to sing.

At the very least, I can give credit to the actors who do their best with the material given. Veteran character thespian Gregg Henry lends dramatic weight to the role of Mike (ostensibly the focus of the original stage production). Gabriel Daniels makes his mark as Gabe, a Metis soldier whose sense of brotherhood found on the battlefield is tested by the class divisions at home. Singer Hayley Sayles also shines in her limited screen time as real-life strike leader Helen Armstrong.

I don’t enjoy being tough on this film, especially given my numerous calls for Canadian stories on the screen. The story of the Winnipeg General Strike absolutely deserves to be told. I just hope it’s with a better budget, scope and above all, a better script next time.

Stand! is currently playing at theatres across Canada