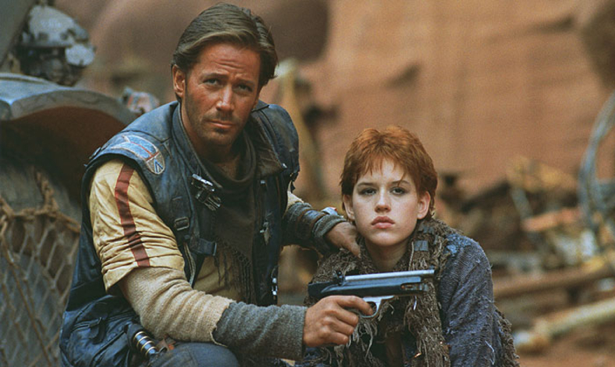 During the second generation of 3-D motion pictures that spawned off the post-Star Wars sci-fi boom, then-rising star Canadian producers Ivan Reitman and Don Carmody hopped onto the bandwagon with their post-apocalyptic space western, Spacehunter: Adventures in the Forbidden Zone.

Set in the distant year of 2136, the film concerns the plight of three female survivors of a wrecked starliner who crash-land on the plague-ridden planet Terra XI and are taken hostage by the diabolical cybernetic dictator Overdog (Michael Ironside). With a 3000 mega-credit reward put out for their retrieval, down-on-his-luck bounty hunter Wolff (Peter Strauss) and his android parter Chalmers set out to the desolate wasteland to collect.

But when Chalmers is suddenly killed in a brutal battle between Overdog’s Zoner army and the nomadic Scavs, Wolff must team up with spunky young tracker Niki (Molly Ringwald) and old army buddy Washington (Ernie Ghostbusters) to navigate the treacherous Forbidden Zone and fight their way through mutants, evil amazons, a dragon and brutal deathsport in order to retrieve the lost captives and defeat the villainous Overdog once and for all.

This is the usual rip-roaring adventure pulp that classic movie serials are made of and the film relishes every minute of it. It’s just too bad that although the project was produced in 3-D (as evidenced by the opening credits and effects like Overdog’s “fusion tube”), the story and characters themselves are barely two-dimensional at best. Each actor plants both feet in their respective archetypes and rarely deviate from them.

Strauss is serviceable as the film’s reluctant-hero protagonist, but is ultimately outshone by his co-star Ringwald who’s spirited performance manages to bring some life and humanity to a film lacking just that in it’s first 20 minutes. Ironside is deliciously vile as the cackling antagonist but is somewhat hampered by the puzzling decision to limit his mobility by plugging him to a cumbersome apparatus for the majority of his screen time.

The proceedings are given a solid boost by stellar production design by Jackson De Govia and a fist-pumping western-inspired score courtesy of the legendary Elmer Bernstein. Last-minute replacement Director Lamont Johnson keeps things moving at a decent pace even if the results are slightly under-cooked. I do wish I could have seen this in 3-D, but alas I only had a flat VHS copy to go off of. That being said, the gimmick would likely have benefitted the proceedings only so much.

Ultimately, the film delivers just what you’d expect from a low-mid budget 80s sci-fi even if it constantly reminds you of better films you could be watching (Mad Max or Escape from New York anyone?). Its harmless fun that like fast food, will satisfy you while consuming it, but leave you unlikely to recommend it to friends afterwards.