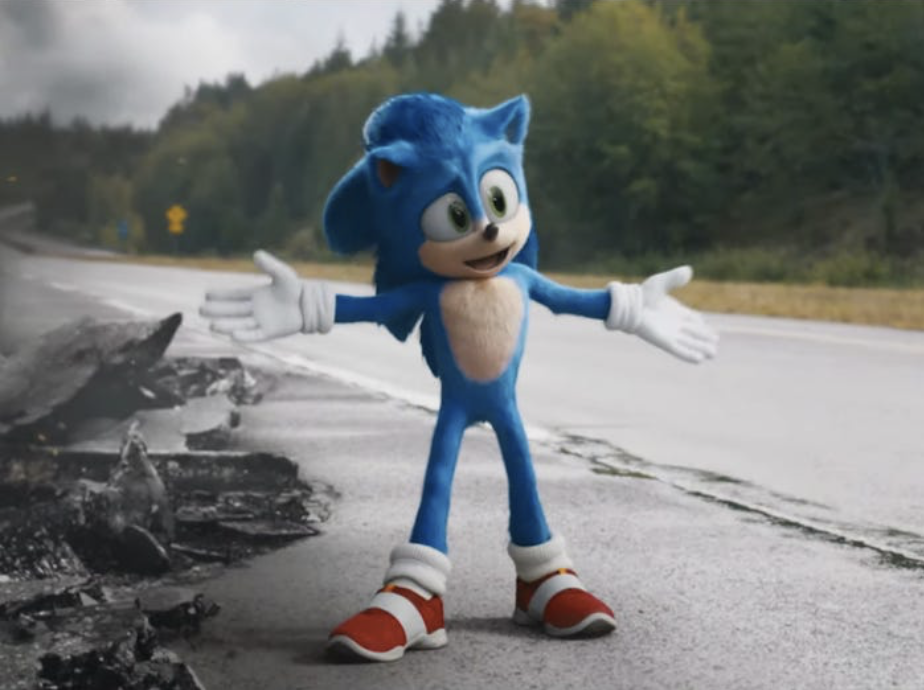 Much of what is seen onscreen in your average film is artifice in the service of realism. Actors pretend to be people they’re not, Production Designers erect true-to-life sets and Directors ultimately craft stories that feel real, helped along by our suspension of disbelief.

But there are particular times where this pursuit of realism can go a step too far. Take two blockbuster film trailers from last year. Broadway adaptation Cats horrified Twitter users the world over with it’s creepy feline-human hybrids and those same eyeballs were burned with the acid fire that was the first trailer for Sonic The Hedgehog. The beloved Sega character had been mangled into a visual farce that ostensibly aimed to balance realism with the fantastic, but achieved neither.

Fans were swift to voice their displeasure and in an unprecedented move, the studio listened. Delaying the film’s release three months, the character was promptly redesigned to more accurately reflect his cartoon origins and by the time the 2nd trailer dropped last November, the fanbase’s opinion had done a complete 180 as praise for new rendering poured in. The film finally premiered last weekend to outstanding audience praise and box office coin to match, breaking the video game movie opening record with $70 million. But hype aside, how does the movie itself actually fare?

The film wastes little time getting up and running (yeah, yeah, pun intended), as we’re swiftly introduced to the titular Hedgehog (voiced with zeal by Ben Schwartz) as he narrates his humble origins on a faraway planet plucked straight outta vintage Sega games. When his unique speedster abilities attract unwanted attention from local power seekers, he is sent to good ‘ol Earth to lay low lest he and his powers be discovered.

Sonic isn’t one to let enforced isolation get him down as he makes himself at home in the fictional hamlet of Green Hills, Montana, spending his days running rings around the highway and spying on the citizens from a distance. His favourite denizen lies in Sheriff Tom Wachowski (James Marsden) who dreams of bigger and better things than acting as a babysitter for this mostly crime-free town.

Both their lives get a whole lot more interesting when after accidentally causing an attention grabbing electronic pulse that wipes out a quarter of the nation’s power, Sonic finds himself on the run from the egomaniacal Dr Robotnik (Jim Carrey), appointed by the feds to trace the source of the disturbance. When Tom’s interference causes Sonic to miss his portal exit, the two of them are forced to team up as they race to catch another portal in San Francisco all while evading Robotnik’s, well…robots. This light matinee fare scores where it counts the most: its disarming protagonist. The beautifully rendered animation pared with a dynamite performance from Ben Schwartz make for a hero you’ll follow just about anywhere. It’s difficult to imagine how the previous design would’ve managed to make such a connection. Only a buried hard drive in the Paramount vault knows for sure.

The rest of the mostly-Canadian cast is more than up to par. Marsden reads excellently as Sonic’s reluctant-yet-competent human sidekick. While I maintain that Jim Carrey’s best days are behind him, he still gives it his all here as the ego-centric mad doctor. A hidden cast member in the form of a adventure-heralding score by Tom Holkenborg (better known as Junkie XL) also leaves an lasting impression as it has found favoured space on this reviewer’s playlist.

The film also scores points for its simplicity and desire to entertain. Many a franchise feature these days feels the need to saddle the audience with endless backstory and too much world building too soon. True to form, Sonic swiftly sets up the pins before knocking them down in a satisfying 99 minutes. There’s fan service to be had for sure (make sure to stay for the credits!), but anyone new to the Sonic clubhouse won’t find themselves lost in the woods.

Sonic The Hedgehog is a far cry from great cinema, but benefits from a significantly low bar set for cinematic video game adaptations over the decades. With its easy-to-follow narrative and winning protagonist, Sonic is an easily digestible dish even if it is fast food. Perhaps some levelling up of story-telling in potential sequels will yield an even more satisfying meal.

Sonic The Hedgehog is currently playing in theatres across Canada.