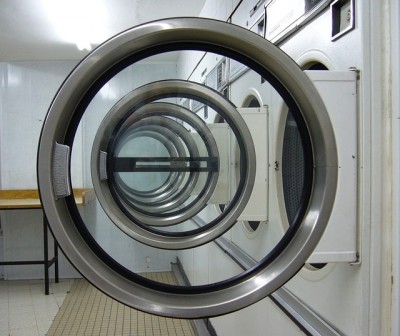 Starring Lea Traversy and Guillaume Cyr as Audrey and David, the couple bring their laundry to the local laundromat and get ready to wash the rather large pile they’ve got. Dave seems to want to know the number of something and tell her how to live life but she goes on about how she doesn’t need help, saying her personal life is none of his business.

Suddenly, at the edge of the laundromat, Audrey sees her parents in her old living room and her father slowing a slide show of every guy she has dated — intimate shots. And some pot-bellied accountant guy (Luc Roberge) who is Audrey’s roommate watches. Enough of that, the laundromat dryers turn off and as Audrey walks along to gather her things, she finds another vignette of the roommate sitting in the laundromat at a dinner table with a calculator and some food and wine. He makes a rather stupid statement and suddenly David snaps Audrey back into reality. Surely enough, they go back to a brief argument.

Okay, maybe this might’ve been a little hilarious, but I don’t quite understand all of it. But of course, it’s anyone’s guess this is by the French Canadian folks of Travelling. Which explains why the laundromat has rooms appearing out of nowhere. The lighting is still pretty fantastic as well as the scene setup even for something as minimal as a local laundromat. Not exactly much of a story, but this was only 10 minutes long.