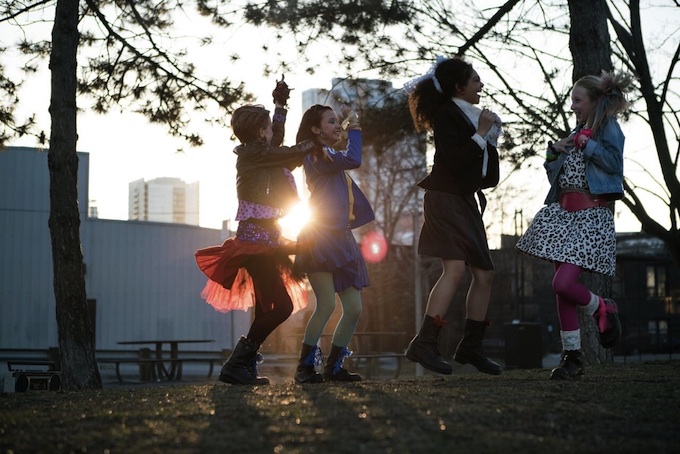 Pre-teen kids can be interesting sometimes. You never know what they’re up to, but they can be interesting. Brave Little Army is a film that covers this concept made by an all-female crew made with the most craziest of concepts well put together. Like I’ve said before, women always make impressive films whether they be short or feature.

This short film made by HNMAG favourite Michelle D’Alessandro Hatt tells a story from the perspective of three girls as they talk about their best friend, Em (Lyla Elliot). The other girls K (Rosali Annikie), Lu (Amanda Cheung), and Dee (Faith Vanderwerf) say how Em encouraged them to be strong fighters and not care about what other people think. They stood out as bold and true more than other students in their school. Everything’s bodacious (do kids still say that?) until one peculiar night when the girls are having a slumber party when a strange noise interrupts their girl talk. When they all go to check it out, they discover something very strange about Em’s mother, who she really is. It’s not exactly embarrassing but it certainly is surreal enough to either confuse you or make you burst out laughing. I’ll leave that for you to interpret.

It’s not super long but it really provides a message that says how strong women can truly be. I personally understand the hassle of working with young actors (based on experience) so I have to give mad respect to Michelle and her reliable crew of ladies for doing such a good job of choosing such an amazing cast who really gave quite the vibe. Not only that, but props to Michelle for making a cameo in there herself as everyone knows her as an actor, now developing into a director.

The story itself is well written and it’s amazing how it goes so rapidly from radical to simplistic to whoa-whats-going-on-here. Gayle Ye’s fine cinematography shows bold colours and appropriate solid lighting to add to any scene. Combined with the seamless and professional editing done by Sydney Cowper teamed up with sound designer Bridget Tang, the film is a true cinematic masterpiece that will want you to see more plot, and let’s not forget that amazing music provided by Janal Bechthold along with Moscow Apartment (Brighid Fry and Pascale Padilla). The film goes to show that women can truly be strong and nothing about their personal lives can bring them down. No matter what their age. It’s already doing a good job at festivals, having been an official selection at the Hamilton Film Festival and St. John’s International Women’s Film Festival.