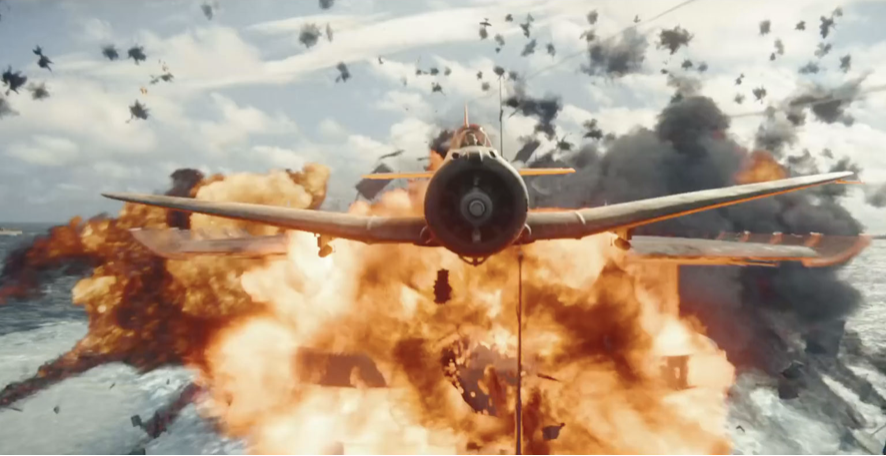 Nearly 75 years after its end, World War II continues to prove fertile ground for Hollywood storytelling. With clear-cut heroes and villains and lacking the controversy and baggage of later wars in Asia and the Middle East, it’s no wonder why filmmakers continue to return to this rich well. This year’s model arrives just in time for the Remembrance/Veterans Day weekend courtesy of blockbuster helmer Roland Emmerich. A retelling of one of the most important battles of the Pacific Theatre, Midway.

Opening appropriately enough with the devastating Imperial Japanese attack on Pearl Harbour, the film introduces us to a smorgasbord of real-life characters mostly centering on maverick pilot Lt. Dick Best (Ed Skrein), hungry for revenge after his best friend is killed in the raid. Keeping an eye on this hotshot is Lt. Cmdr Wade McClusky (Luke Evans) while Bets’s gunman James Murray (Keenan Johnson) prays his pilot’s dangerous flying won’t get them blasted out of the sky.

Back on land, newly installed Admiral Nimitz (Woody Harrelson) must balance his duty to Washington with his faith in Intelligence Officer Lt Cmdr Layton (Patrick Wilson) whose previous warnings about potential Japanese invasion fell on deaf ears. They both rely on Cryptologist Cmdr Rochefort (Brenna Brown) whose bits and pieces of translated intel point to an imminent attack on the Midway Islands which if successful could prove a devastating blow to the already ill-prepared US forces. If the title is any indication, an explosive air battle is coming and history has already decided the winner. All that remains is to see how well it’s all depicted.

The Battle of Midway was previously unspooled on screens back in 1976 in a generally well received version starring Charlton Heston and Henry Fonda. While I can’t compare the two having not seen the former, I was generally impressed with this effort from a director whose been hit and miss throughout his career (For every Independence Day, theres a 2012).

Emmerich has gained a reputation as the German edition of Michael Bay (whose own WWII epic Pearl Harbour was plagued with inaccuracies), but deserves to be commended here for sticking to the facts as much as possible. The film employed Defence Department Historians to fact check the script and the film throughout production resulting in the “most realistic movie about naval combat ever made.” according to retired Naval Rear Adm. Sam Cox. Combining Hawaii location shooting with Montreal-shot interiors and a healthy does of CGI, the film is largely successful in immersing the audience in a long gone time and place.

Ed Skrein is cast against-type here as Best and works well with the part. In fact, the entire movie is well cast (with much Canadian talent lending support) with the myriad of characters here portrayed by confident character thesps who don’t require pages of backstory to let you know who they are. The audience is able to keep track of everyone on screen and they are all given the chance to make their mark. One nagging point  is the near tacked-on subplot of Lt Cmdr John Doolittle (Aaron Eckhart) whose successful air raid on Japan is followed up by a trek through Japanese-occupied China which is ultimately abandoned and only briefly followed up on at the film’s conclusion. One can’t help but suspect this plot thread was for the benefit of the production’s Chinese investors, but I digress.

As technology and access to information improves, it has become possible to bring even more vivid and engaging true-life stories to the screen. While there is of course victory and a taste of glory to be had with Midway, the film doesn’t shy away from the cost and sacrifice war entails, showing as much of the bloody consequence as its PG-13 rating will allow. So after you’ve taken the time to honour the fallen on Remembrance/Veterans day this year, perhaps visit the local cinema and relive some of their experiences.

Midway is currently playing in theatres across Canada.