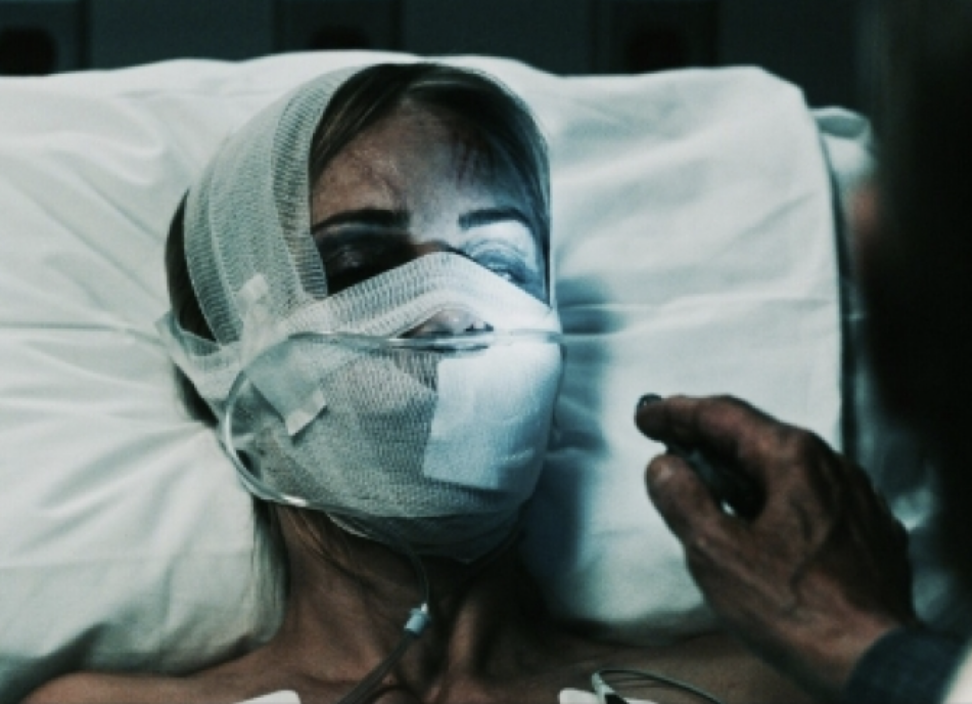 “Why do we insist on remaking tired concepts?” an off-screen character intones as the Soska Sisters’ latest effort lampshades itself right from the get-go. Canada has little in the way of popular screen titles even eligible for remaking as most efforts have failed to find an audience soon after release. David Cronenberg has proven an exception to this with a popular catalogue of titles especially from his body horror genre including the one being reimagined here, Rabid.

The aforementioned off-screen lampshader is walking fashion designer trope Gunter (Mackenize Gray) who enjoys making life miserable for his wallflower-but-secretly-stunning staff designer Rose (Laura Vandervoort). Taking pity on her, model and BFF Chelsea (Hanneke Talbot) stealthily sets her up with office beefcake Brad (Ben Hollingsworth) and a new outfit straight off Gunter’s rack. But Roses’s Cinderella evening turns sour when she learns of the charade causing her to run off headfirst into the film’s inciting incident; a car crash that leaves her horribly scarred.

She won’t have to dwell on her disfigurement long however as she is swiftly contacted by a not-at-all-shady private medical clinic. She is offered free reconstructive surgery by head surgeon Dr. Burroughs (Ted Atherton) in exchange for agreeing to be their latest human lab rat. “What do you have to lose?” Chelsea reminds her and one unusually ritualistic surgical procedure later, she is miraculously healed with restored eyesight and boosted confidence as a bonus.

But this wouldn’t be a marketable horror flick without some serious side effects and they soon manifest in a series of nocturnal blood feasts which our esteemed doc assures Rose are just hallucinations. Whatever she was is catching and soon the whole city is joining in on the fun as the populace slowly devolves into rabid, bloodthirsy zombies (or is it vampires?). Looks like Rose might need that follow-up appointment after all.

Rabid inherits the original’s concept of a reanimated accident victim inadvertently triggering an outbreak and expands it with additional character development and subtle commentary on modern beauty standards. It benefits from a willing and able cast who handily craft compelling characters with little effort. Vandervoort capably handles the transition from shy wallflower to cursed knockout while Atherton shines as the doctor whose veneer is just one lab accident away from revealing the madman beneath (Casting co-star Stephen McHattie in the role would have been too obvious).

It’s fortunate that Rabid is blessed with capable performers as its execution feels far too pedestrian. The film is content to meander through its runtime with uninspired cinematography, sore thumb editing and odd production design choices that seem to have wandered in from a different film (one of the nurses wears an old-school uniform without the retro-inspired surroundings to justify it). There’s certainly meat here to chew on, if only the package weren’t so dull.

Rabid makes for a decent Grindhouse experience even if it seems more destined for in-flight movie than the local cinema. This is the first opportunity I’ve had to view a work from the Jen and Sylvia Soska. Perhaps they play better when adapting their own material.

Rabid is currently playing at theatres across Canada