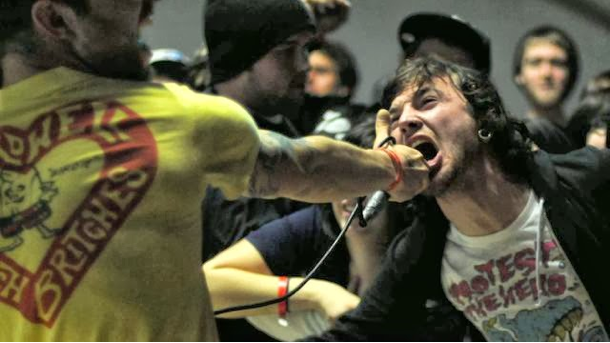 Beneath the gleaming glass towers and majestic mountain views of Vancouver lies a considerably dirtier, grungier and wilder subculture of underground and barely legal punk rock mania. Well, at least thats the case in the pre-Olympics world of Melissa James and Kate Kroll’s 2010 documentary, No Fun City.

“No Fun City is street level. Fun City is underground, here with all the rats” quips DIY venue operator Justin Grodin as he and his crew scour the coastal metropolis for basements, parking garages and back-alley dives to stage their underground punk shows for wildly enthusiastic audiences. Shirking noise bylaws, capacity restrictions and astronomically high-priced liquor licences, these pop-up and semi-permanent venues catered to a crowd constantly pushed to the margins of a rapidly gentrifying city.

Justin is not alone in his quest for fun as local proprietor Wendy “13” provides a prime space for local and international bands to melt faces at the legendary COBALT MOTOR INN. It’s an uphill battle to keep the place afloat as it resides in a dilapidated hotel owned by the notorious slumlord Sahota family. Tiles are missing, the rooms upstairs crawl with bedbugs, “shitwater” drips down the walls and Wendy is left to manage it all as the wealthy Sahotas steadfastly refuse to fix anything (a similar situation at another Sahota property, The Balmoral Hotel recently had tragic consequences). With no soundproofing in the century-old structure, noise complaints from neighbouring condo-dwellers pile-up and Wendy soon faces an eviction notice and thousands of young revellers face being pushed out of their own city yet again.

But there is hope for Vancouver’s music scene as several blocks away, a new venue is about to rise from the ashes of an old Chinatown theatre. THE RICKSHAW has sat doormat since the kung-fu flick craze waned in the mid 1980s. Local entrepreneur David Duprey has teamed up with former manager of “The Sweatshop” (a concert venue/indoor skate park) Malice Liveit, to bring some life back to the third-world conditions of Hastings Street with a steady slate of rock shows and other live acts. They also hope to make some real money via a legit liquor licence will allow for which David will fight through any layer of bureaucracy Vancouver City Hall throws at him to get.

No Fun City is both a time capsule and a timely commentary. A lot has changed in the city in the near-decade since it was filmed. The punk rock audience has dwindled and newer (ie; “hipster”) musical tastes have moved in. The fight for live music and cultural venues has continued however. Since the film’s release smaller venues have been forced to move farther to the margins or out of the city entirely and others have had to adapt, although not without a fight (The Rio Theatre raised quite a ruckus with the Province in order to obtain a liquor licence). Along with housing, the conversation around live venues remains a vital one in Vancouver.

Ostensibly shot on multiple formats (including uber-grainy MiniDV tape), the doc sports a grungy look suitable to it’s subject matter. Wendy, David, Justin and Malice all make for engaging subjects in their quest to prove that sometimes you can fight (or at least skirt around) City Hall. It is a shame though that the latter isn’t given any screen time to present their case for why their bylaws and procedures are so confusing and inflexible. The lone voice of dissent in the film lies with the seemingly mononymous “Agzam”; a False Creek resident voicing the neighbourhood’s concerns with the Cobalt’s noise and smoking. Some context into why Vancouver’s regulation of nightlife is so archaic would have made for a stronger narrative.

Docs like No Fun City are valuable in that they take us places we either wouldn’t go or didn’t know existed, and that they help preserve the experience for those that did. The piece has heart, gusto and is unafraid to shoot from the hip. But without hearing from both sides, the big picture as well as potential solutions to the problem of vanishing performance spaces remain woefully incomplete.