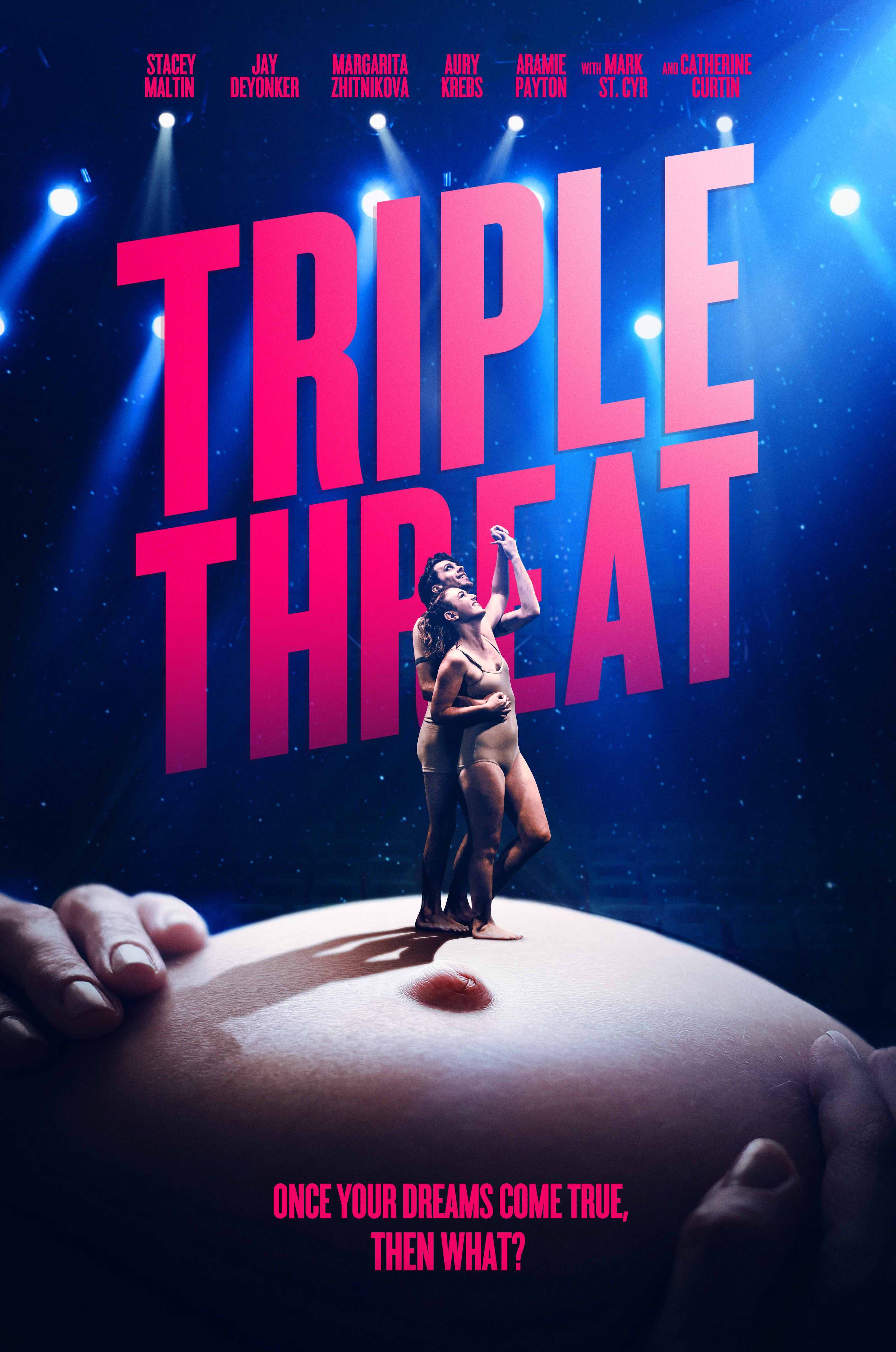 Three friends, One musical, and a few different things happening, all at the same time. Stacey Maltin took this story and made it into probably the coolest concept I’ve ever seen. It’s not just Triple Threat by name, but triple threat by nature. You’ll be impressed, surprised, and even in love with this film when you watch it.

It’s 2009, and a large theatre group partake in a big crazy party involving alcohol and theatrics. Chloe (Stacey Maltin) and her best friend Maggie (Margarita Zhitnikova) have plans to put on their own musical showcase, Firefly. That particular night, Chloe has a make-out session with her boyfriend Liam (Michael Varamogiannis Hernandez) and her new friend Gus (Jay Deyonker). Meanwhile, Maggie’s deals with former associate Griffin (Aramie Payton) who drops out of their show for an underwear commercial that offers him $50,000. Chloe comes up with the best solution, to have Gus fill in for Griffin. The first show starts out simplistic and gets so much better over the years. 10 years passes and their show has more cast members and is a masterpiece musical and gets good recognition with positive reviews. Once they get good buzz and worthwhile income, Gus decides he wants to have a kid of his own and asks the girls to help him with bringing one in. Maggie offers her womb, but Chloe wants nothing to with this kind of action in donating a human egg at first, until she finally decides this is what’s best and agrees to help. They prepare for the child, get an opportunity to expand to a bigger stage and the opportunity to go onto Broadway thanks to producer Bradley Sand (Neal Lerner), and end up having to deal with a big issue involving the three-way baby because Maggie’s partner Chiara (Aury Krebs) and the entire cast know all about it. Chloe’s partner Caleb (Mark St. Cyr) is at least a bit more supportive on the other hand. After lots of practice and setup for the show, the process of going through labour, and shopping for baby stuff, a broadway show is in the works. But Chloe is upset when she discovers one of the celebrities acting on the big show is Griffin, and even meets her ex-boyfriend Liam who has gone on to become a parent. Maggie actually seems happy to meet Griffin for the first time in over a decade, Gus is impressed by his performance, and everyone is excited for the new upcoming show. Well, almost everyone. In fact, some issues arise and things nearly get out of hand.

Throughout the film, we not only see the elaborate setup of what is in the actor’s minds as they act out the performance, shown with very impressive costumes and done in intense and bright colours. While I’m not too fond of musicals, I definitely felt like this had the right amount of musical moments and that made the whole thing beautiful. It seems like there might be drama starting at certain points but we don’t get to see major changing points until the end and even those still get worked out, plus we get treated to quite a few different stories going on. They all come together in a fantastic setup and it’s interesting to see how some of these people reconnect years later. The most interesting thing about this story is, the writers also starred as some of the lead characters in it (Stacey practically directed the whole thing) and some of the other actors did production work as well. This whole thing shows they all worked very hard on it. Well crafted, and a great story full of stories, Triple Threat is 3 times more worth than most stories out there today.