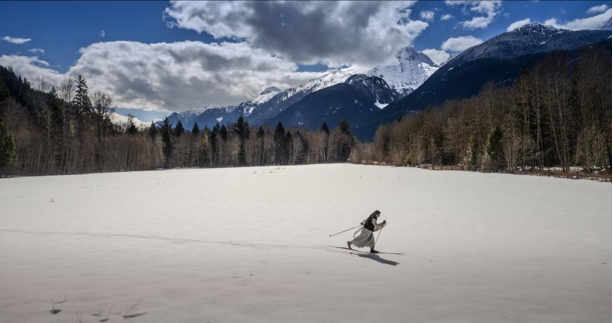 British Columbia is over 75% mountainous as the opening title card of This Mountain Life relays to us. While most of beautiful B.C’s population lives within sight of these majestic marvels, few of us ever truly experience them. This latest documentary by Grant Baldwin of Just Eat It-fame transports us through the coastal mountain ranges and introduces us to the intrepid individuals who dare to travel and even live among them.

The film’s through-line focuses on the mother-daughter team of Tania and Martina Halik who embark on the quite frankly insane adventure of hiking the entire span of BC’s coastal mountain range by foot; over 2300km from Squamish to Skagway, Alaska. Covering a six-month journey, the pair encounter blistering cold, merciless winds, raging rivers, thick forest growth, and even a few surprises courtesy of climate change. The tenacity of these two women comes even more into focus when we learn that Tania escaped the brutal communist regime of the Czech Republic by hiking through similar conditions, all while pregnant with Martina’s older sister!

Interspersing this tale are several vignettes detailing the lives of others who have made their homes or livelihoods among the snowy peaks. We meet the likes of Simon, a “snow artist” who produces finely-detailed artwork via snowshoe tracks worthy of Art Attack. Further on is Barry, a hardcore climber and mountain guide with “no interest in dying” for he “climbs so (he) can live.” Most unexpected are the nuns of Queen of Peace monastery outside Squamish. The sight of the enigmatic Sister Claire cross-country skiing in full habit is a sight to behold! Uncle Alp of Heidi-fame seems to have a Canadian counterpart in artist Bernhard Thor who has lived for decades with his wife Mary in utter seclusion. They get along fine as long as their gardening is kept separate (they disagree on technique).

The more dangerous aspects of mountaineering are covered in the rather harrowing story of nature photographer Todd, whose story of being buried some twenty feet after an avalanche while friends Janina and Ian frantically try to dig him out will leave you on the edge of your seat.

While I’m not particularly drawn to nature-based documentaries (What can I say? I’m a city boy), the strong word-of-mouth this doc has generated since its premiere at HotDocs this year encouraged me to seek out out. I recently attended a packed screening at the Rio Theatre and I can safely say that it’s a breathtaking sight to behold.

The boundary-busting trek of Tania and Martina is the perfect thread in which to weave this rich tapestry. It’s truly amazing the footage that Baldwin and crew were able to capture here, from sweeping drone shots and eye-popping timelapse to gruelling first-person GoPro shots taken by the women themselves. The eye candy doesn’t stop there with cleverly subtle visual effects used to transition between seasons.

While this story and it’s characters could easily carry their own feature, the surrounding vignettes prove rich supplementary material, giving the audience a breather from the stressful journey and giving us time to appreciate the mountains from a less primal viewpoint. Most of us only see these landscapes from a distance and it’s truly a privilege to be granted this insider look at life among them.

Any film that can encourage it’s audience to live their life just a little more to the fullest is always worth recommending. Credited as director, cinematographer and editor, Grant Baldwin has produced a truly stellar work that will likely leave you yearning for the mountain life yourself.

This Mountain Life has upcoming screenings in Victoria, Calgary, and Hagensborg, BC throughout January. Visit the film’s website athttps://mountainlifefilm.com/screenings for dates.