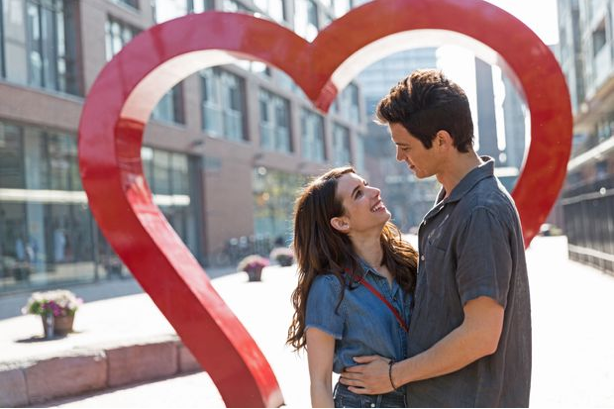 “Romeo and Juliet died!” remarks one character to another after being compared to the tragic Shakespearian couple. Nothing quite so sordid befalls the protagonists of Little Italy, set among the Toronto district of the same name. In fact, the worst you could say about these two is that their story comes out of the oven just a little bland.

Aspiring chef Nikki (Emma Roberts) has just returned home to Toronto from culinary school in London. Her eccentric family is delighted to see her back in Little Italy, especially her mother Dora (Alyssa Milano) who hopes to set her up with the first Italian stud available. Fate has other plans however as her girlfriends promptly reunite her with childhood friend Leo (Hayden Christensen) who is still working as a pizza delivery boy for his father Vince (Gary Basaraba).

Their reunion is complicated however by a bitter ongoing feud between Vince and Nikki’s father Sal (Adam Ferrara) over a disputed pizza recipe with the dueling patriarchs forbidding either family from having anything to do with the other. Compounding this is Nikki’s ticking clock for her return to London where she has a chance to design a gourmet menu for a 5-star restaurant. Further complicating the matter is Leo wanting to open his own pizza shop featuring his own recipes, yet conflicted about competing with his father. It all comes to a head when both Leo and Nikki are selected as champions by their respective families to compete in a community cook-off to determine who stays in Little Italy and who goes.

The plot and characters are efficiently set up and clearly drawn, but one can’t help but wish they were drawn with a little more definition than mere caricature. The warring families are borderline childish and eye-rolling. Some supporting players like geriatric lovers Franca (Andrea Martin) and Carlo (Danny Aiello) add some levity and spice to the mix while others like shop employees Jogi (Vas Saranga) and Jessie (Amrit Kaur) are so underwritten that you wonder why the script even bothered to include them.

Stars Roberts and Christensen fare much better as they make a visibly cute couple although the latter could stand to add a little more heart to go along with his swagger. Andrew Phung’s gay bar proprietor Luigi is also a welcome highlight. It’s kind of a shame he wasn’t given more to do as his biggest laughs come during the film’s end credits gag reel.

Perhaps the film’s biggest strength is it’s sense of place. Every setting whether at the pizza shop, outdoor market, or local bar is warm and inviting. Props should be given to the producers for opting to stick with the Toronto setting as similar films produced in the area (I’m looking at you, Big Fat Greek Wedding) often opt to swap in an American setting. This reviewer can’t help but wonder if a cheque from Air Canada may have helped sealed the deal as they maintain a lingering presence on screen even outside the airport!

When the promo poster for Little Italy first showed up online a number of months ago, it was the subject of much ridicule for seemingly advertising a bland romcom that belonged in a bygone era. Its a pretty apt assessment, and not surprising given that director Donald Petrie’s resume consists of several examples of the genre including How to Lose a Guy in 10 Day sand Just My Luck. While a pleasant and occasionally hilarious diversion, the film seems content to tick off the usual boxes without giving us much to chew on (although one may feel tempted to grab a slice of pizza afterwards).

Little Italy is currently playing on screens across Canada.