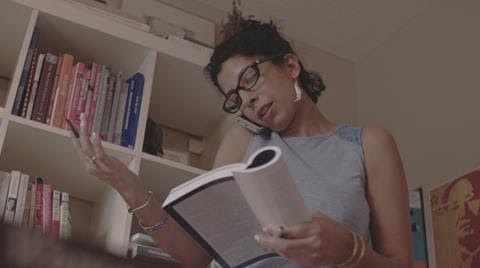 Although Ms. Gill accepts society’s view of abortion as  a woman’s right and is put off by the “self-righteous” tone of the pro-life side, she begins to wonder if women have access to all the information they need when making the choice.

She starts out watching media reports on the issue that consist of heated arguments and undisguised mockery. From there, she attempts to gather facts from scientific organizations and finds most of them unwilling even to talk to her — at one point, we see a security guard escorting her out of the National Cancer Institute. A doctor tells her flatly that there are no long-term consequences to abortion. Ordinary people on the street want to know what side she’s on before giving their opinions. How to get at the truth? It’s difficult for Ms. Gill — and this is a difficult film to watch, though also one of the most worth watching.

The quest has a personal note as she’s learned her own late-term miscarriage may have affected her risk of breast cancer.

Much of the film explores the abortion-breast cancer connection. Though it seems bewildering to us laypeople, doctors in the film explain that pregnancy causes changes in the breast cells, and any time cells change, there’s a chance of the change going wrong. Full-term pregnancy offers protection against this, but an interruption of the pregnancy may cancel out the protection.

Women who’ve suffered other physical and mental health problems after abortions also tell their stories in the film.  We also see medical conferences where the question was shut down completely.

Though Ms. Gill still believes abortion should be an option for women, she’s come to see the option in a different light since doing her research for this film.

HUSH makes reference to a 1996 meta-analysis of the issue which, one researcher says, was conducted by a team with a wide variety of views on abortion.  In a way this is reflected by the filmmaking team: “pro-choice” Director, Punam Kumar Gill, “pro-life” Executive Producer, Drew Martin and “neutral” Producer Joses Martin, who cooperated to bring the truth to the viewer. It’s something our whole society could learn from.

HUSH will be released internationally on July 1st.

(We were provided a free screener via ChicArt PR.)

One thought on “HUSH (Review)”