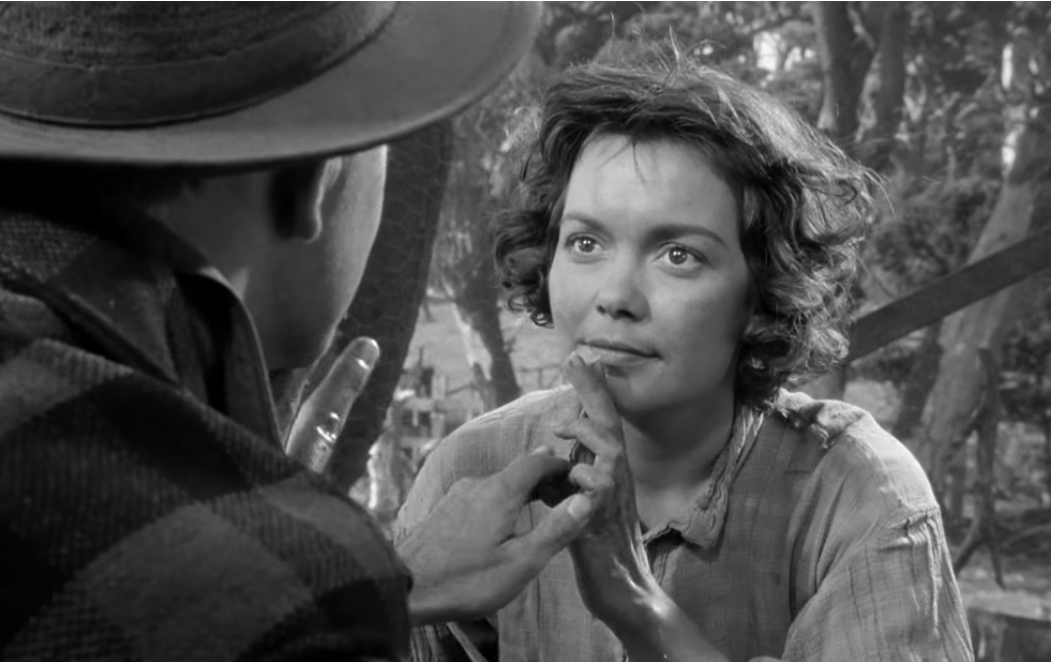 Most of the films I’ve covered in the course of this column tend to fall among the high adventure or thriller genres.Golden Age Hollywood didn’t seem all that predisposed to use the Great White North for its more prestigious productions, but one of the few times they did payed off when the 1948 Warner Bros production of Johnny Belinda scored at both the box office and the Academy Awards with twelve nominations.

Based on the 1940 Elmer Blaney Harris Broadway play of the same name, the film zeroes in on a remote fishing community on Cape Breton Island. Unlike their modern cousins in The Grand Seduction, the townsfolk here have no need to trick a physician to move to town as one has arrived in the form of Dr. Robert Richardson (Lew Ayres) seeking a fresh start.

While attending to an unusual house call of helping a cow give birth, Robert meets Belinda MacDonald (Jane Wyman). She is both deaf and mute which without proper education has left the entire town and even her father (Charles Bickford) and Aunt Aggie (Agnes Moorehead) under the impression that she is dumb as well. Robert knows otherwise of course and promptly makes it his business to teach the young woman sign language. She picks it up fast and revels in the newfound ability to communicate.

Although Robert’s relationship with Belinda is based more on affection than love, his jealous secretary Stella (Jan Sterling) believes otherwise causing her to resent both of them. This in turn leads to trouble with her fiance Locky McCormick (Stephen McNally), a frequent customer of the MacDonald farm. When Lucky gets drunk at a town social, he stumbles to the farm and promptly rapes Belinda leaving her pregnant.

Rumours begin to spread around town about Robert being the father losing him respect and patients in the tight-knit community. When he takes a position in Toronto, the townspeople decide to coerce Belinda into giving up the baby to newly-wed Locky and Stella on the grounds of being an unfit mother. When Belinda stands her ground and shoots Locky dead to prevent him from taking Johnny, she is placed on trial for murder. Put on display in front of the town and with Robert and family at her side, Belinda fights not only for her future, but her child’s as well.

Those twelve Oscar noms resulted in one win for Jane Wyman’s turn as Belinda and she earns every ounce of that Oscar Gold here. Without uttering a single line, Wyman conveys a rich characterization of a woman reborn. From her forlorn, introverted acceptance of being branded a simpleton to her fierce resolve as a new mother, Wyman conveys more in a single glance alone than many actors in an entire film. The camera clearly loves every minute with her and you will too.

Even a stellar performer needs a strong supporting cast and this film delivers with three more Oscar-nominated performances. Ayres is a custom fit for a physician from his run in the Dr. Kildare series and easily conveys the warmth and bedside manner we’d wish all the medical profession could inherit. Bickford and Moorehead both add an extra dimension to what have could’ve easily been one-note portrayals. Bonus points to McNally as the vilest onscreen drunken lout this side of Oliver’s Bill Sykes.

The film is definitely set in then-modern times, but you would be forgiven for thinking that time in this screen rendering of Cape Breton had stalled in the 19th century. Everyone in town drives a horse and buggy with not a motor car to be seen until the characters take a brief detour to Halifax. Farmer MacDonald seems set on using human labour over any form of machinery and good luck even finding a telephone! That being said, the town is a pleasingly quaint idyllic setting (subbing in California’s Fort Bragg for Canada’s east coast). It’s at the very least an affectionate depiction if not an accurate one.

Modern audiences might accuse the film of being Oscar bait, but even the most melodramatic material scores when its done well. The anachronisms may still be causing the late-great Pierre Berton to spin in his grave, but Johnny Belinda would remain a touching, heartfelt winner regardless of where it had been set. Highly recommended.