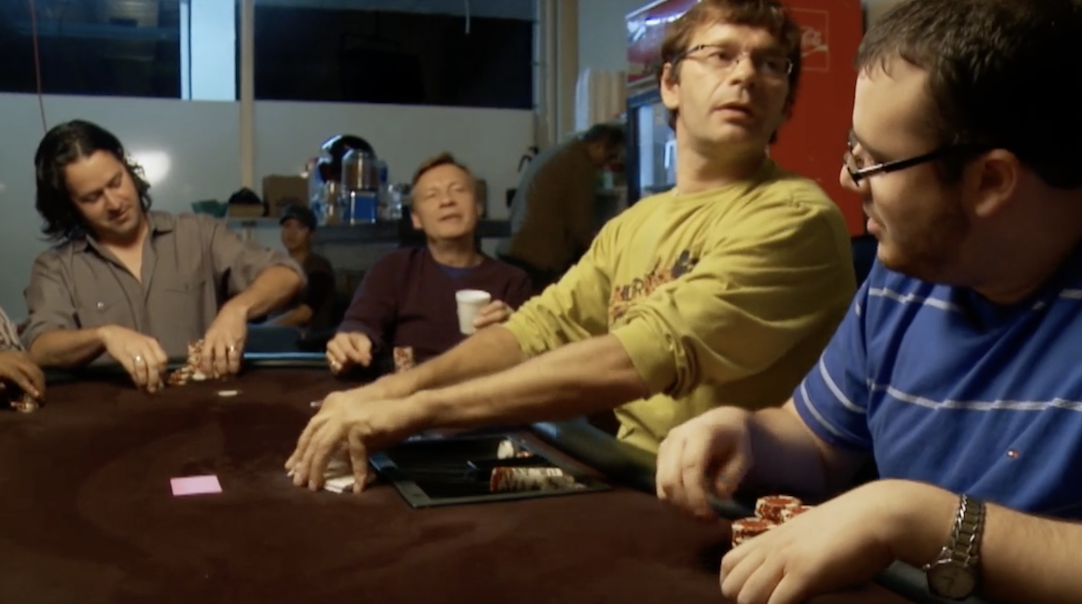 When it comes to gambling, it’s all about luck. You can gamble just about anywhere. At a casino in your city, on the Internet, on vacation, even at your place or some friend’s place with a simple table and a deck of cards. But usually when it comes to friends, it’s only for fun and nobody really gambles money. Sometimes they gamble other things. But interestingly enough, those aren’t the only places to go looking for gambling fun in hopes of winning huge amounts of income (the keyword is hope). There are other spots to go to, that very few people know about and perhaps they’re better off not being known by everyone, due to how shady they can be. One of the most shady places to do gambling is in the secret underground clubs in your local city. Of course, you never know what you’re going to run into when you do something that dangerous.

Nothing explores the risks better than Matt Gallagher’s documentary Grinders. Unlike other poker films which are usually fictional or based off real events, this documentary explores the real time journey of after what happens when a filmmaker goes broke, his field of work goes down the pipes (surprisingly) and he’s too broke to feed his wife and daughter. So what does he do? He does the last thing anyone would do in such a dire situation, play poker with the criminals of the underworld, in hopes he makes good money. If you think gambling is a dangerous approach already as it is, it’s more risky when you’re facing against people who do this 24 hours a day, better known as the Grinders. Some of the grinders Matt talks to explain in great detail about their life. Grinders play over 200 games daily, and make plans to keep the stakes high.

Through the review, Matt not only explains his story and personal dreams to move to Vegas, he also talks to grinders Andre and Danny, who share quite a story about their lives, former grinder Daniel Negreanu who has managed to make a huge fortune just from his luck of having one lucky hand after another, and Lawrence, the owner of a private gambling club in Toronto.

Further adding to Matt’s story, he  experiences issues such as losing money, and he also has to deal with another baby coming on the way, but it’s a 50-50 chance for him in both of these issues. Lawrence’s situation is much worse as the landlord has shut down his place and he’s fighting hard to get it reopened. As for Danny and Andre, they both have to explore the issues of up and down luck as Danny goes across the country to championship poker games hoping for big money. Andre has plans to make it big himself by submitting an audition to a reality TV show where he wants to get out of Canada and make it in the big leagues with the card-playing professionals. One of the interesting things about this documentary is not only does it explore that one part of a city nobody usually gets involved with, it also touches base on what some of the people involved with grinders think about their lifestyles and what it’s like to live this risky high-demanding lifestyle. But deep down, you notice not everyone who does it is a criminal. The documentary explores the fact that these people are doing it for a living, and that losing is one thing they absolutely can’t do because their life depends entirely on making money through this very important but shifty system. If anything, it’s dangerous but whatever it takes to pay the bills, I guess. You also learn some of the methods that some of these players incorporate when it comes to playing games like Texas Hold ‘em as well as some basic rules. Not so much in the way of learning playing except for maybe being careful. Along with the fact that sometimes life is like a card game, there’s a lot of risks involved. My advice is to be like Danny in the daytime and stick to online gambling. Getting started is easy, if you know how to play poker online. You’re sure to get lucky, just remember to gamble wisely.