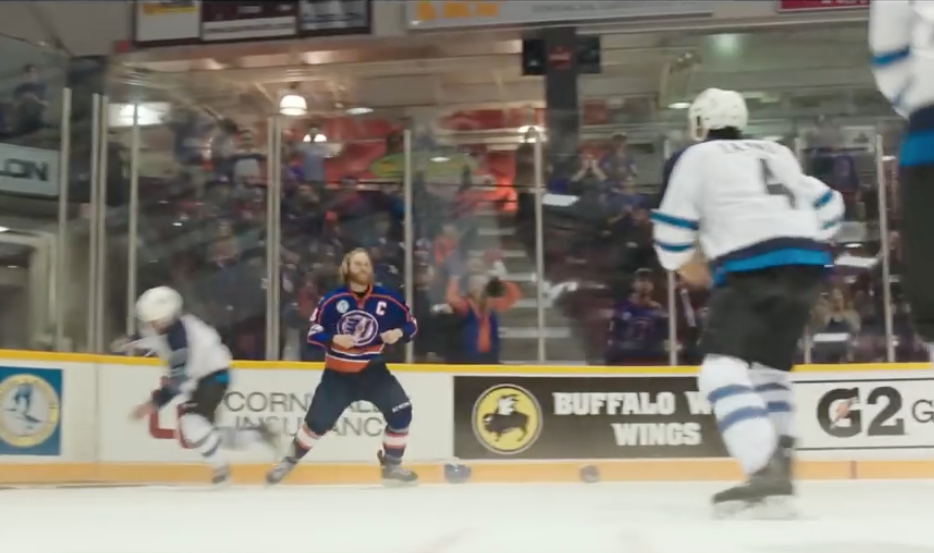 A few months back, right before the NHL playoffs kicked off, I gave a very positive review of 2011’s hockey comedy film Goon, which was directed by Michael Dowse and written by Jay Baruchel and Evan Goldberg. In fact, I enjoyed the film so much that I vowed to review its then newly released sequel, Goon: Last of the Enforcers, which I finally had the chance to watch last week. I’m sorry to say, however, that despite hitting the target on a few occasions, this is a sequel that misses too many shots to be considered a winner.

One of the most notable absentees for this sequel is Goldberg as a screenwriter, who is replaced by Jesse Chabot as Baruchel’s writing partner. The premise is a seemingly wise enough avenue for its story, where are we once again introduced to loveable dimwit Doug “The Thug” Glatt (Sean William-Scott), who is forced into retirement after being injured in a fight with the film’s antagonist Anders Cain (Wyatt Russell). Doug takes on a mundane job to provide for his pregnant wife Eva (Allison Pill), but is quickly drawn back to hockey as he trains himself out of injury with the help of his old rival, Ross “The Boss” Rhea (Live Schreiber).

The loss of a writer as talented as Goldberg is apparent not so much in the overall story itself, but in the finer details that merges both the narrative and the characters together. The initial reunion between Doug and Ross, as an example, could have been a promising mix of comedy and dramatic transition, but instead it cuts their meet short by jumping to Doug in bed with Eva, who tells him he smells like hotdogs, which is the screenwriters’ way of basically telling us that Ross agreed to train Doug, skipping a big chunk of their interaction for the sake of streamlining. Instances like this show the film lacks a certain cohesiveness, even when it does a good job of conveying its ideals on the relationship between team dynamic and family.

It is not so much the story that suffers the greatest blow in this sequel though, but its characters. William-Scott makes a welcome return as Doug, and while I understand that, by principle of storytelling, characters should show some degree of growth, I very much missed the character’s insecure vulnerability from the previous film. It instead feels discarded, which in turn prevents William-Scott from going the extra mile to make Doug that much more relatable.

Another character problem lies with the film’s opposing forces. In the 2011 film, Ross “The Boss” served as a three-dimensional, unconventionally likeable antagonist. This was thanks in no small part to Schreiber’s considerable acting ability and his chemistry with William-Scott, which is actually one of the sequel’s mot well-realised aspects, even in spite of their aforementioned shaky reunion. However, the villain in this instance, Cain, is a flat, poorly-realised character that is not at all helped by Russell’s uninspired performance.

I believe that all these problems, in part, can also be attributed to the absence of Dowse as the director, with Baruchel instead filling in this time around. It is not that Baruchel doesn’t show ability as a director here, he just fails to express the same visual flare showcased by Dowse before, where the occasional intricate shot served to actually advance the unspoken development of the characters, like the several top-down shots depicting  Doug’s unwillingness to walk over the dressing room team crest.

While it must be said that Goon: Last of the Enforcers made me laugh on a few occasions, in the end it is just a disappointing well of missed opportunities, especially when it had a premise that, on paper, justified this sequel. The film is more vulgar and more violent than its predecessor, and while there is nothing wrong with that in my mind, in this case it feels as though it is compensating for what is ultimately a comedy lacking in both consistency and dramatic punch.