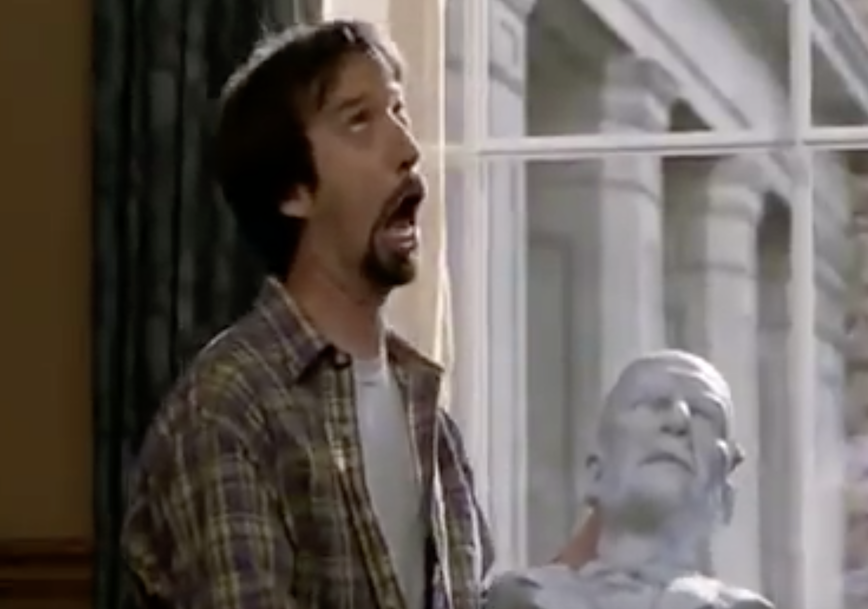 Remember Tom Green, anybody? For those who don’t know, he’s that guy who once humped a dead moose and somehow managed to have a film career. Green was essentially a passing fad who used gross-out gags and shock value humour to gain attention, even though he came off as nothing more than a poor man’s Eric Andre by today’s standards.

Hosting his own MTV show and starring in the very successful sex comedy Road Trip earned him enough brownie points to co-write, direct and lead a film of his very own, Freddy Got Fingered. To say the film was crucified by critics at the time would be an insult to crucifixions, with the consensus being that it was one of the worst films ever produced by a studio. However, some opinions have ever so slightly softened over the years, to the point that I decided to watch it and decide for myself if it was simply misunderstood when released in 2001, or if it’s still the same steaming pile of crap it was then.

I must admit, the opening moments of Freddy Got Fingered had me somewhat impressed given its reputation. It’s essentially about an odd 28-year-old slacker, Gord (Green), who dreams of becoming an animator, but after a failed attempt at making it in Los Angeles, moves back home with his parents. The film begins with Gord making his way to the bus station to meet his father Jim (Rip Torn), mother Julie (Julie Hagerty) and brother Freddy (Eddie Kay Thomas), who are there to see him off on his doomed trip. The first minutes actually showcase some impressive cinematography and a moment that even made me chuckle, despite some awkward direction from Green that made some of the other potentially humorous moments feels stilted. It is at least a technically modest effort throughout at least.

That’s the nicest thing I can say about Freddy Got Fingered though, because by about the five-minute mark, just after Gord hitting the road in his new car, every other aspect of the film completely falls apart, as from there on out it’s just one bafflingly cringeworthy scene after another.

The first of many is when he’s driving to L.A. and notices a horse that’s being used for breeding, and thus proceeds to hop into the field and grab the horse by its erect penis (oh yes, that happens) and yell “Look at me daddy, I’m a farmer.” In that very moment I could only contemplate the Freudian-level issues of Green, not Gord.

I cannot fathom just what was going through Green’s head at the time that he thought this scene was funny. It was jarringly weird, abrupt and did absolutely nothing other than make Gord out to be a complete jackass. And such sentiments are not unique to this scene. Gord subsequently commits acts like hopping on a conveyor belt and waving around a large sausage from his crotch while proclaiming “I’m a sexy boy” before annoyingly shouting “Ding-dong” over and over again, or skinning a dead deer and then wearing its bloodied pelt to “get inside the animals” he seeks to animate.

By the latter point I made the mistake of asking myself how much worse can this get, because in a slightly later scene he ‘helps’ a woman give birth, before cutting the child’s umbilical with his own teeth in the most gruesome manner possible, proceeding then to swing the new-born around the room until it starts crying. If The Godfather is essentially one scene of sheer brilliance after another, then Freddy Got Fingered is The Godfather of awfulness.

There was one eerily fitting moment early on in the film where the head of an animation company, played by Brat Pack member Anthony Michael Hall, critiques Gord’s artwork, saying “it doesn’t make any sense. Okay? It’s fuckin’ stupid…. What you need here is elevation. Okay? There actually has to be something that happens that’s actually funny.” Any arguments for the film’s redeeming qualities in recent years have generally focussed on its use of metahumour and relative self-awareness, but I really don’t think that Green intended for Hall’s dialogue to be one of them, as Freddy Got Fingered could do with a hell of a lot of elevation. Sure, there is that one fleetingly funny moment in the beginning, which, to be fair, is already more than some of the worst films I have personally seen, but saying that Freddy Got Fingered is better than Meet the Spartans isn’t actually saying a whole lot. I think Green was simply oblivious of just how crappy his material is here, missing the excruciating irony of his own dialogue in the process.

Really, I could write a whole book on how awful Freddy Got Fingered is, like how the title literally references a sexual act fabricated by Gord about his younger brother that not only makes a mockery of sexual abuse, but is such an insignificant part of the story that I imagine it was another juvenile attempt at humour by Green. Then there’s Gord’s hot-headed father, who is just the worst, Gord’s wheelchair-bound love interest Betty (Marisa Coughlan), who is nothing more than a one-dimensional caricature that laughs more than she speaks, and Shaquille O’Neal, who should never be in films, period.

The list of offences goes on, but I truly don’t have the word count to name them all. There’s a moment of metahumour in the end that probably sums it up best, however. After Gordo and his father are freed from terrorist capture (don’t even ask), someone awaiting their arrival can be seen holding up a sign that reads “When the fuck is this movie going to end?” At seeing that, I couldn’t help but wonder if it was Green’s intention all along to make a bad film with humour so mind-numbingly tasteless that I might now require psychological treatment. I wouldn’t put it past Green, as the thought of going through everything for that one brief moment of payoff makes a lot more sense than anything else in the film. I honestly don’t know what I was expecting before I watched Freddy Got Fingered, and I would say that I got what I deserved, but nobody deserves this. It’s cinematic waterboarding, and one of the worst films I have ever seen.