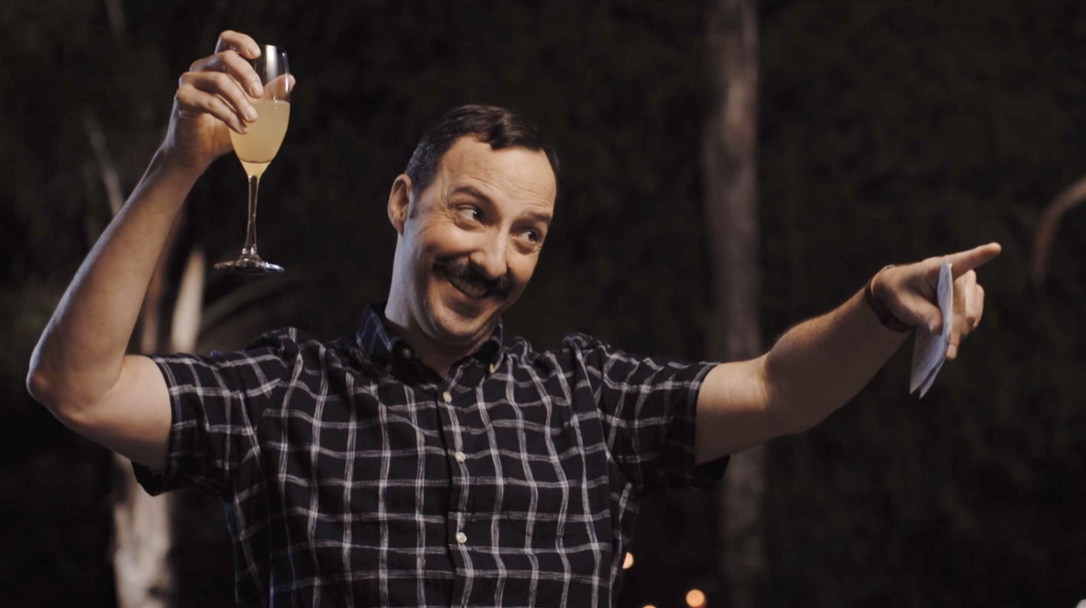 We all have that one friend in our lives who is super outgoing and eager to please, usually to the point of sheer exasperation for everyone around them, not that they’d notice. This personality type is not always a good fit for the hyper-judgemental, cyber-connected society that Silicon Valley has exported worldwide, as the hapless protagonist of Eat Wheaties! finds out the hard way.

This adaptation of Michael Kun’s 2003 comic novel, The Locklear Letters, updates the communication from letters to Facebook posts and the celebrity from Heather Locklear to Elizabeth Banks, whom middle-manager Sid Straw (Arrested Development’s Tony Hale) attended college with (and dated her sorority sister too as he is always quick to mention). Having been named co-chair of the upcoming Penn State reunion, Sid attempts to reach Banks on her Facebook fan page via a series of letter-length posts (which he signs with the eponymous “Eat Wheaties!” in reference to an in-joke between the two) which he fails to realize are being posted publicly.

When these heartfelt notes go viral and gain the attention of Banks’ short-fuse manager Frankie (Sarah Chalke), he is promptly slapped with a restraining order, fired from his job, loses his apartment, car and self-respect in that order. Determined not to let the cold, cruel world have the last laugh, Sid resolves to fight back, albeit with the cheapest lawyer he can find (Paul Walter Hauser, fresh off Richard Jewell fame) and only if the lawschool.com graduate can pass his bar exam!

Hale is utterly believable as the ever-optimistic Sid who will make you smile even as you shake your head at his social faux pas. Hauser easily steals every scene he can lay his talent on as fish-out-of-water lawyer James who has such chemistry with Hale that you wish the two had more scenes together. A buddy-road trip sequel, perhaps?

Director Scott Abramovitch keeps things moving in his freshman feature, masterfully establishing character with little effort for his American stars and Canadian supporting cast and wrapping it up in a tidy, brightly-lit package. It’s a handsome movie that never belies its lower budget (Canadian production after all).

That being said, I have to admit that I had trouble making it through the first half of the film, if only that poor Sid seems to be surrounded by Scottsdale, Arizona’s absolute worst kind of people with only his brother Tom (David Walton) and bar server bestie Wendy (an under-used Danielle Brooks) showing any shred of human decency towards the poor guy. Alan Tudyk suffers the most from the “human shit-stain” syndrome seemingly infecting Arizona playing the throwaway role of Sid’s more successful college acquaintance Dave who probably been played just as well by the casting director’s cheaper third choice.

Eat Wheaties! is cringe-inducing to a fault at times, especially given Sid’s propensity for socially-awkward toasts and harebrained wedding antics (ask his sister-in-law). But if you stick with it past a few seat-squirming humps, you’ll be rewarded with a delightful cult-comedy in the making which an extended COVID season unfortunately kept most of us from experiencing in the theatre. Consider hosting a watch-party when restrictions ease.

Eat Wheaties! can be found on VOD platforms including Vudu, iTunes and Prime video