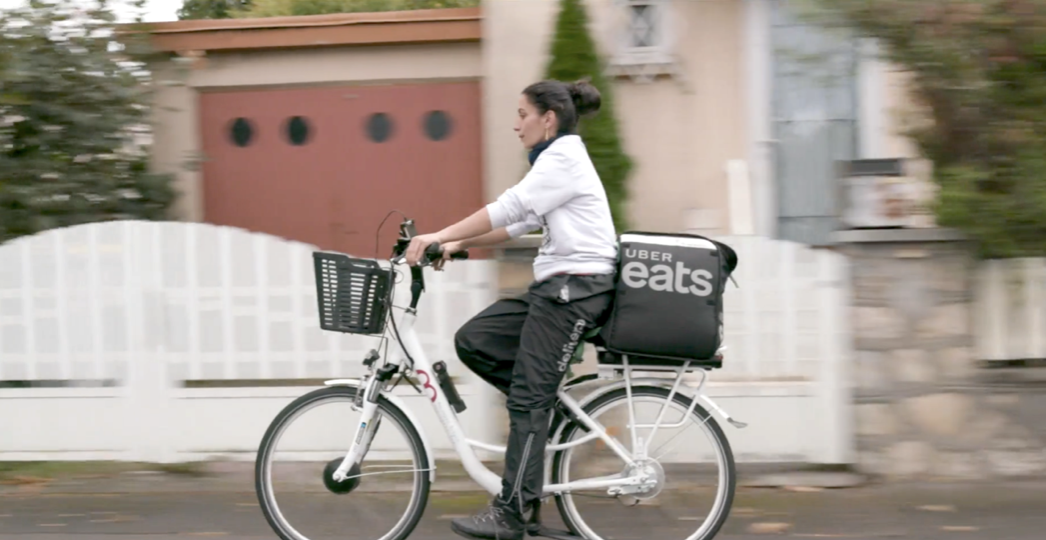 “If I lose my phone, I lose my life” observes Leila Ouadad as she dresses for the drizzly French elements. “If you don’t have a phone, you don’t have work”. Florida’s Jason Edwards would concur as he similarly observes “I’ve got to have a laptop. This is how I put money in my pocket.” Neither have had success in securing what would traditionally be considered full-time employment, but have instead generated income by taking multiple smaller jobs offered by big tech apps. Leila delivers for Deliveroo and UberEATS by bike and Jason scrapes by doing paid surveys he finds on Amazon’s MTurk. These apps promise flexibility and rewards for those who sign up, but all is not what it’s cracked up to be as chronicled in Shannon Walsh’s The Gig is Up.

Food, packages and even rides are delivered by a worldwide network of couriers, whuile algorithms are seeded by unseen humans doing tasks that the machines can’t quite master yet, all under the smooth branding of smartphone apps distributing bite-sized jobs or “gigs”. This gig economy is allegedly worth some $5 trillion USD globally and it is expected that millions more people will be doing some form of gig work by the middle of the decade.

By and large, all these workers are considered “independent contractors” under the current system. They have virtually none of the rights or benefits entitled to full time employees under the law. Thus, the apps themselves bear no real responsibility to the manual labour who make their business model function. Some like Jason are resigned to continue the status quo with no further options on the table (his criminal record and gold teeth don’t play well at job interviews), but others like Leila are determined to fight back to ensure that workers in the new gig economy are seen, heard and affirmed rights in a so-far dehumanizing system where faceless algorithms and a Black Mirror-esque ratings system can wear flesh and blood down to the core.

The Gig is Up skillfully pulls back the curtain on the pitfalls and abuses of the gig economy. We may see these workers whiz by on the street and obligingly accept food from them, (an interaction even more fleeting during a pandemic), but the everyday reality is far from the promises of flexibility and autonomy, promises built on finite corporate subsidization in pursuit of a monopoly. But the buck doesn’t stop at Silicon Valley. The film also asks its audience to reflect on what it actually means to have the elements in our day (commuting, lunch, transcription, etc.) fuelled by an algorithm- labor pool.

Missing from the conversation is potential solutions to the problems the film raises. We hear from the workers themselves and assorted glass tower authors and scientists studying and publishing on the phenomenon from afar, but no representatives from the apps are present, nor any government regulators who could shed some light on how the sector can be better managed in the future.

The film concludes with the passage of California Assembly Bill 5 which essentially turned most of the state’s independent contractors into employees. Unfortunately, this ended up threatening the livelihoods of such sectors as journalism and live music where maintaining a large payroll of employees isn’t sustainable and along with heavy lobbying by big tech, AB5 was ultimately defeated by Proposition 22 last year. This fact curiously fails to make the final cut, even as a text coda.

The Gig is Up is short on answers, but does much to put this necessary conversation on the cultural radar. The services provided here have only grown in importance during the COVID-pandemic which started after the film finished principal photography (we see the beginnings of the pandemic in a coda). As consumers, we’re often asked to rate our couriers sometime after our food arrives or when we’re dropped off at our destination. If nothing else, The Gig is Up will encourage you to rate a little higher and tip more generously.