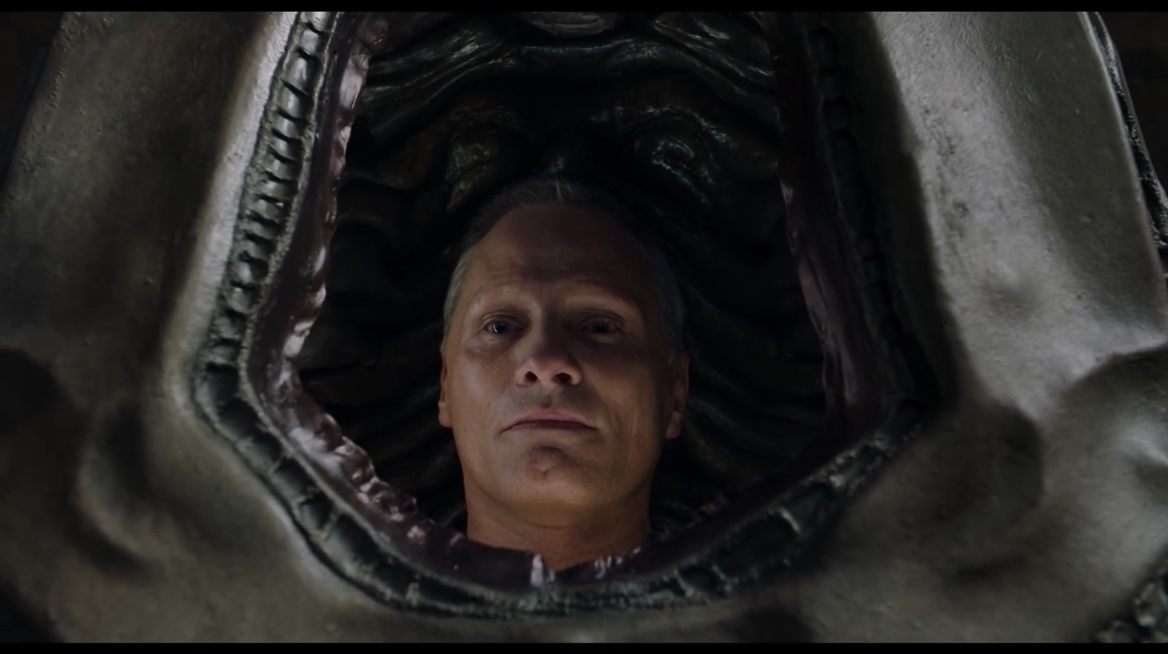 If you’re a regular reader here at Hollywood North Magazine, you’re likely already familiar with Canada’s own David Cronenberg having emerged from a supposed filmmaking retirement with Crimes of the Future, a remake-in-name-only of his earlier 1970 effort of which you can read my (attempted) review here. While the two films share nothing in common in terms of story and characters, the dark and disturbing body horror themes are still present and dare I say omnipresent in this latest work.

Set in a dark (literally), industrial wasteland of a future, performance artist couple Saul Tenser (Viggo Mortensen) and Caprice (Léa Seydoux) have a successful act where the latter does live surgery on the former. Saul has “accelerated evolution syndrome” which causes his body to produce new organs which are theatrically removed out of caution that allowing them to remain could trigger off-spring that are no longer considered “human”.

Others don’t have these same qualms, especially shifty cult-leader Lang Dotrice (Scott Speedman) who has altered the insides of himself and his followers to be able to digest plastic. This trait was naturally passed to his son Brecken (Sozos Sotiris) who was subsequently murdered by his mother Djuna (Lihi Kornowski). It’s a messy world this film inhabits and I’ve only just begun to scratch the surface of characters and plot thread at play here. Suffice to say, it all leads to the most disturbing autopsy ever performed on screen or off.

Cronenberg is often tough to review, even years after his initial experimental phase. I still recall being utterly baffled by the dense dialogue of Cosmopolis and his bewildering adaptation of Naked Lunch. I’ll even admit it here; my favourite films of his were his commercial years with hits like The Dead Zone or The Fly. Still, we should be thankful to have a homegrown filmmaker who has maintained his voice and not been absorbed into the commercial vanilla of something like the Marvel Cinematic Universe (Hey, I think Scorcese had a point).

I can safely state that his latest effort is the one that will stick with me the most out of his recent work. The film’s themes of evolutionary anxiety and artistic hubris are compelling ones and are further explored effectively through an unsettling aesthetic with chilling imagery, hair-raising gore and even unexpected nudity. The word of the film is not one to be taken too literally. Medical technology seems to have been monopolised by H.R Giger and all other tech has regressed to 20th century levels (no smartphones here, but plenty of Super 8mm cameras). It instead encourages the audience to examine the body itself as a modern marvel. A more biological Black Mirror, if you will.

The characters themselves are split into opposing factions between those wanting to maintain the status quo of human biology and those wishing to push that same biology to its limits. Tenser and Dotrice both see their bodies as commodities, but the latter is willing to push further boundaries. Most of the actors bring their A-game under Cronenberg’s experienced direction, although this reviewer was a little put off by Kristen Stewart’s breathy delivery as the timid bureaucrat Timlin. They can’t all be winners.

For what Crimes of the Future lacks in verisimilitude and even comprehension, it balances out with compelling intrigue and discomforting dissections on the nature of being human in a state where it’s not external technology threatening us, but our very own biological processes. Once again, Cronenberg makes the case that the scariest things lurk right beneath our own skin before proceeding to make it crawl. Recommended.

Crimes of the Future is currently screening in theatres across Canada