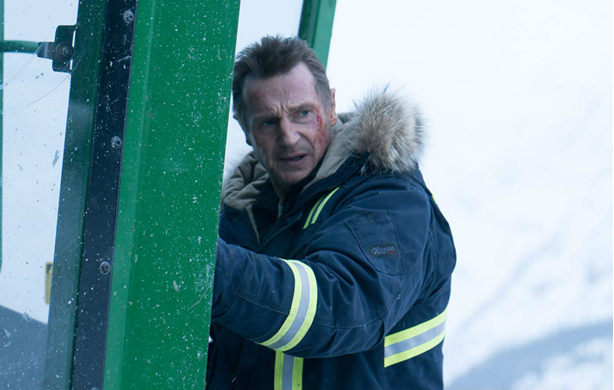 There are few more compelling stories than those about someone with nothing left to lose. Tales of lone warriors wreaking vengeance on those who have wronged them have thrilled audiences for years and Liam Neeson is a key figure in this tradition (his Taken monologue will likely adorn his tombstone). He plays once more to his strengths in the frosty thriller Cold Pursuit.

Small town snowplow driver Nels Coxman (Neeson) has for many years plowed the same stretch of mountain road outside the fictional Colorado ski-town of Kehoe, which has recently awarded him Citizen of the Year for his service. His simple idyllic existence comes crashing down when his only son Kyle (Michael Richardson) is found dead of a heroin overdose in neighbouring Colorado, the pain of which causes his wife Grace (Laura Dern) to leave. Steadfastly refusing to believe his boy was an addict, Nels soon learns from a friend of Kyle’s (Wesley MacInnes, interviewed here), that Kyle was in fact murdered by order of a local drug Lord, Viking (Tom Bateman) from whom the pair had stolen a drug shipment.

With a serious bone to pick and a lifetime of crime novel knowledge under his belt, Nels promptly begins hacking his way up the kingpin’s food chain disposing of one gangbanger after another. Still struggling to get to the man at the top, Nel’s efforts inadvertently set off a turf war between Viking and his father’s former Native American partner, White Bull (Tom Jackson). The mounting death toll forces local Officer Kim (Emmy Rossum) to take notice as all four parties head for a final showdown that just may wipe Kehoe off the tourist map.

Director Hans Potter Moland returns to helm this remake of his earlier 2014 effort In Order of Disappearance. While I haven’t had a chance to see Stellan Skarsgard in this role, a viewing of the trailer tells me that many of the same beats are repeated from murder set pieces and even specific shots. It’s not the first time a director has transposed his work for an overseas audience (Grudge or Funny Games anyone?), so international comparisons aside, how does the movie fare?

It certainly scores some points for not going where you’d necessarily expect. Just when you think you’re watching Taken 4, the plot shifts to focus on the dynamics of unstable gang turf. While this is by no means boring as both Bateman and Jackson have compelling screen presence, it does have the effect of damping the momentum of our protagonist who is nearly reduced to a supporting role in the final act.

The film is at it’s strongest whenever Neeson is on screen; whether he’s struggling to complete an improvised kill (his character ain’t a pro this time) or reading a child a snowplow manual for lack of a bedtime story. Emmy Rossum provides solid support as the only cop in town who seems to give a damn about the brewing drug war. Laura Dern is unfortunately wasted in an underwritten, thankless role as Neeson’s grieving wife Grace whose abrupt and frankly cold exit elicits more scorn from the audience than sympathy.

Thanks to a surefire lead and confident direction, Cold Pursuit is a cut above your average revenge thriller, despite a few bumps in the road. While Neeson has hinted in the past that this could be his final action role, his upcoming filmography (including a reboot of Raymond Chandler’s infamous gumshoe Phillip Marlowe) suggest there may be some gas left in the tank. Cold Pursuit certainly doesn’t prove otherwise.

Cold Pursuit is currently playing in theatres across Canada.