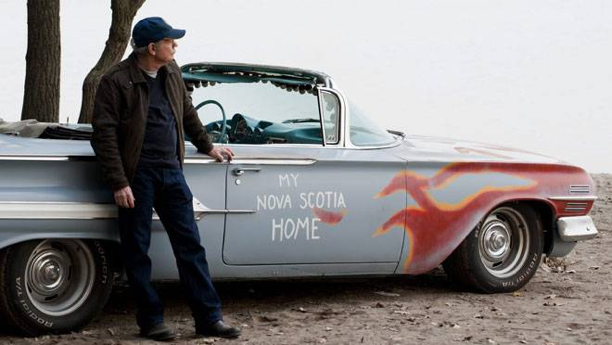 It is often said that you can never go home again. But if one does venture back down memory lane, they may find more than just the ghosts of their past. In 1970, Pete McGraw and Joey Mayle fled the law in Toronto, with the latter leaving behind a pregnant wife. 41 years later, director Don Shebib saw fit to continue the story of Canada’s favourite hosers (Bob & Doug McKenzie notwithstanding) in Down the Road Again.

In present day Vancouver, Pete (Doug McGrath) is about to retire after seemingly several decades as a mail carrier. He still hasn’t found that thing that “says he was there” and his current buddies are no more encouraging than Joey was. Pete hasn’t seen his friend in quite some time and the reason suddenly arrives on his doorstep in the shape of an urn. Joey has passed away from lung cancer and has left his ashes and several envelopes of instructions behind. He wishes for his old pal to drive to Toronto, make peace with his family and spread his ashes in the Atlantic.

With just enough cash left behind to restore Joey’s old 1960 Chevy Impala, Pete soon hits the road and finds himself in familiar territory. Joey’s ex-wife Betty (Jayne Eastwoood) is none too happy to see the man who convinced her husband to abandon her although Pete’s old girlfriend Selina (Cayle Chernin) seems keen to rekindle the flame. It is at this tense reunion that Pete meets Joey’s adult daughter Betty-Jo (Kathleen Robertson). At her own crossroads after being dumped and out of a job, Betty insists on joining Pete on his journey to Cape Breton.

As this uneasy road trip gets underway, Pete and Betty slowly begin to make the peace with each other that they couldn’t with Joey. The man has left many broken pieces in his wake with an ex-wife, estranged best friend and a daughter who barely knew him. But soon after the Impala arrives in Sydney, Nova Scotia the two of them will discover a long buried secret that will either lead to Joey’s redemption or ultimate condemnation.

There are relatively few bona-fide classic films in Canadian Cinema. Even less which have spawned any kind of franchise (Bon Cop Bad Cop and Goon being more recent phenomenons). It was a risky proposition to re-visit a story many Canadians had taken to heart and to do justice with a follow-up. Fortunately Director Don Shebib and company are more than up to the task.

The film superbly meshes an older generation with a new one. McGrath is in fine form as the ever-dreaming and aimless Pete. The years have worn his body down, but he still holds out hope for leaving his mark on the world. Eastwood and Chermin are given much more to do this time around as they reprise their supporting roles. Betty is still hurting from her fly-by-night marriage and isn’t afraid to take Pete to task for his role in Joey’s disappearance from her life. Selina acts as a buffer between the two, oddly still sweet on Pete after all these years. Kathleen Robertson commands her screen time well as McGrath’s new onscreen partner. Her daddy issues have weighed her down most of her life and it’s through reconciling with Pete that they are both able to move forward.

The death of Paul Bradley in 2003 meant that any sequel to Goin’ Down the Road would be obligated to continue the story without the character. His spirit remains over the proceedings however, brought to life by the ever reliable voice-over of Eric Peterson. This along with grainy flashbacks to the first film pervade the narrative to an almost annoying degree. Theres nothing wrong with a little nostalgia, but the movie lays it on too thick as if most of the audience hadn’t seen the original. A little more trust in this film’s own story and those viewing it would have gone a long way.

Down the Road Again does it’s job admirably, bringing the story begun nearly half a century ago full circle. While it may veer dangerously close to cookie cutter TV-movie territory at times, Don Shebib has given us a solid reminder that the path we’ve already travelled down may just be worth another road trip.