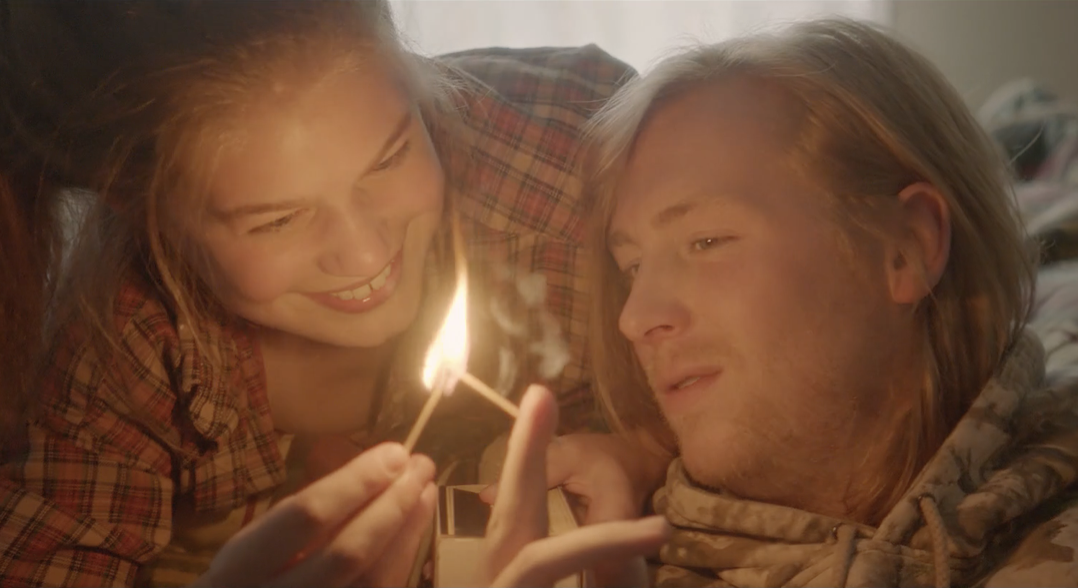 Did you ever hear that story about the small-town boy who was dissatisfied with his circumstances and wanted to get out of dodge for a brighter future, only to have current relationships and circumstances hold him back? You have? The same one where he’s estranged from his parents and his friends/girlfriend don’t understand him? Well pop the corn one more time because east coast triple-threat Taylor Olson has some reheated leftovers for you in Bone Cage.

Twenty-something lumberjack Jamie (director Olson) toils away in the Nova Scotian(?) brush to make ends meet in generic dead end town #37, while saving whatever wildlife he can from the destruction left in his daily wake. He’s been estranged from his father Clarence (Christian Murray) since his brother died under cloudy circumstances and does his well-meaning, if questionable best to mentor younger friend Kevin (Sam Vigneault) through the town’s hardscrabble existence.

As his impending marriage to long time sweetheart Krista (Ursula Calder) approaches, Jamie seeks to find a way out of a situation with no long term future in sight even as circumstances like lack of funds and education continually erect ever-higher barriers around him. The answer might require a leap of faith, but not the inspiring kind.

Adapted from a stage play by Catherine Banks, Bone Cage is a vessel in search of contents. There is a bevy of super-charged, honest performances here by Olson and the rest of the cast as they attempt to explore themes of poverty, gender roles and environmentalism, but nearly all that energy is dissipated through poor story structure, messy editing and unchained cinematography in desperate need of a tripod (I don’t care how low the budget is, 100% handheld camera is just plain lazy).

Midway through the film, Jamie tells Krista that the miles of trees she sees on the road is an illusion, a mere screen of trees to shield the endless hectares of clear-cut behind them. Bone Cage ironically tries to shield its own shortcomings under a layer of pretentiousness that is difficult to overlook. Maybe there was a better movie to be had here, but Olson’s feature debut merely left this reviewer feeling lost in the clearcut.

Bone Cage will be available on VOD July 6.